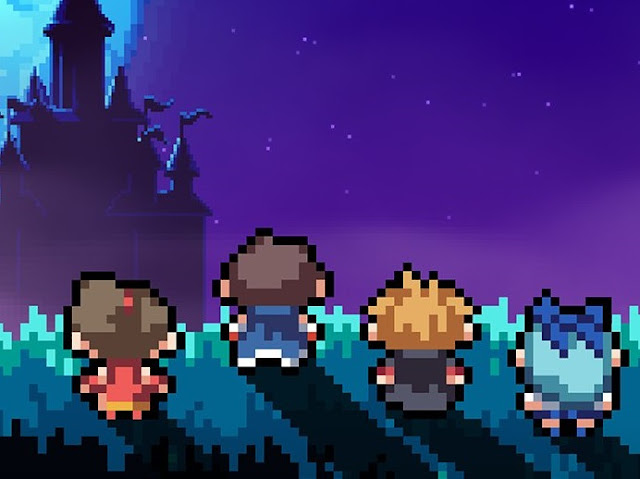 The Longest Five Minutes is a game entirely about memories, and of nostalgia. So it makes sense that the game itself is a nostalgic trip right back to the era of eight bit graphics and super-simple combat. Some will probably pass this off as a game that’s too slavish to the traditions of the genre and as such doesn’t live up to the expectations we have of modern games, but I found the game so sweet and good natured that I couldn’t put it down.

You know how the stereotype beginning to a JRPG is that the main player character either wakes up on a bed, or finds that he or she has a spot of amnesia?  The Longest Five Minutes plays with that stereotype gloriously. The hero wakes up with a spot of amnesia… only for some reason he’s woken up having passed out right before the game’s end boss – the Demon King. Worse, because he has amnesia, our hero can’t remember how to fight effectively, and so is useless to his three allies in this battle in his current state. The rest of the narrative involves a desperate struggle as the three allies try and hold the Demon King at bay while reminding the hero of the quest he’s undertaken and the power that he’s accumulated (so that he can join the battle and defeat the monster).

The rest of the game has players working through memories of key moments that the group experience through their quest. It plays the same way that it would in any other JRPG – characters will get quests from people in towns and villages, enter dungeons to complete those quests, and generally be helpful and good to all those around them. They’ll get experience points as they defeat enemies and bosses (delightfully termed “re-experience” points here, but functioning in the same way), collect loot, jump on ships for trips across the ocean, and everything else that happens through a standard JRPG. 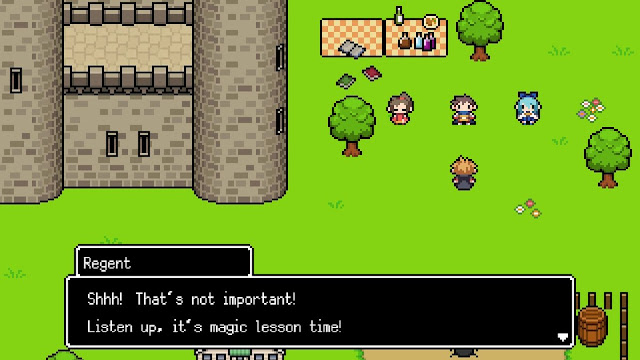 But it’s flavoured differently, because it’s presented in the context of memories and not experiences in the now, and that has allowed the developer to provide players with a sequence of key snapshots of the quest, rather than have to deal with the mundane in between. When coupled with the beautifully sentimental soundtrack, and minimalist, but resonant, communication between characters, there’s a real sweetness to the writing, and you quickly develop a strong attachment to the relationships and bonds that develop between the characters. Nostalgia does tend to add sentimentality into a memory, of course, and the game captures that brilliantly.

But The Longest Five Minutes is also a conversation about JRPGs themselves, and a paired down way for people to be nostalgic about everything they love about JRPGs, removed of the parts that are less pleasant or best forgotten. The game’s not overly difficult, for a start, and while there are random encounters, they tend to be spaced far apart from one another. Boss battles tend to be lengthy affairs, but tactically simple and therefore it’s unlikely that you’ll actually lose at one. Which makes sense, since to lose in battles in these memories would break with the immersion of the story; your characters wouldn’t have made it to the Demon King if they hadn’t have won.

Moreover, it’s a clever commentary on the impact that nostalgia has on memories. We call the effect ‘rose tinted glasses,’ but when we get nostalgic there’s always the danger that we remember things as being more simple, straightforward, and therefore ‘better’ than they really were. As I was playing through The Longest Five Minutes I was was acutely aware that these memories that my hero was having was just that, a memory, and I was led to wonder if the party really was levelling up as quickly as they did, and found the bosses as straightforward as they did, of if it’s like our memories of how easy we found the original Final Fantasy… right up to the point where we actually break that game out again for the first time in a couple of decades. 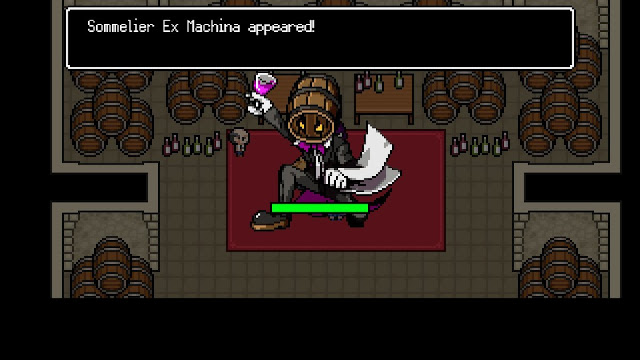 Ultimately, it doesn’t matter if the hero and his team are looking back on their journey with rose tinted glasses, since you only ever encounter these enemies in the context of the memories, but I do like the way that the overbearing sentimentality of The Longest Five Minutes leads us to question the validity of the experiences as they’re being remembered. It’s a commentary on the power of memories and nostalgia that we should all be reminded of from time to time, lest we allow ourselves to allow nostalgia to taint our memories of our experiences.

But the game isn’t serious about these topics. Oh no. Not when one of the bosses is a “sommelier” with a barrel of wine for a head. The enemy designs are bright and ridiculous, and the most fun I’ve seen a developer have with a game this side of Earthbound. Environments, simple as they are, pop with verve and colour, and while the sprites are exceedingly basic in design, the art team has done an amazing job in packing in real personality to those sprites; as I said earlier, I came to love them for their silly spins on Final Fantasy-isms and poses.

Every so often the game cuts back to the battle with the Demon King, and you’ll be required to put the scraps of memories that you’ve pulled together to good use to keep him from wiping out your party. It’s a very anime thing to do – the battle progresses in tiny bursts before both sides break away to have a solid conversation with one another. During these sequences you’ll often be asked to make a decision, which might affect how much damage one character or another takes in the ongoing battle. Meanwhile, a clock on the right hand side ticks over, and it’s here that the game gets its title from; the battle with the Demon King itself only lasts minutes, but those cut scenes can run for hours. Without these interactions with the Demon King it would be easy to forget that the game is about snapshots and memory, so this serves as a remarkably effective framing device for the very different experience that the game is asking of you. 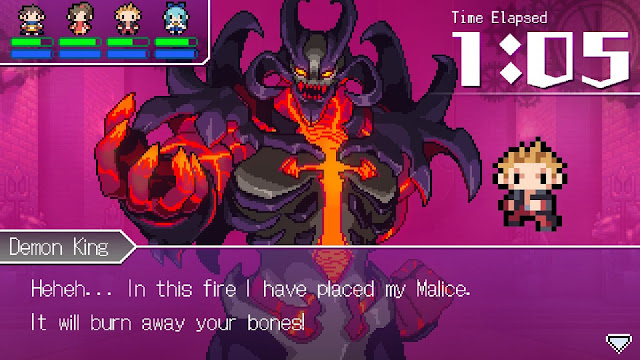 There really isn’t that much more to The Longest Five Minutes. It’s a clever mix of sentimentality and satire, structured in a way that’s quite unusual for JRPGs. With most games in the genre, the end boss is the goal and triumph. The Longest Five Minutes is a love letter to the genre that wants you to remember that you’re meant to enjoy the journey in a JRPG, too, and I certainly walked away from this game with a renewed appreciation for the spirit of adventure in these games itself.