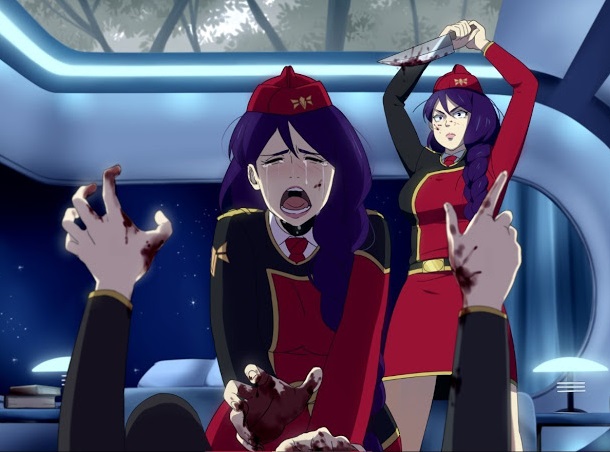 One of the Aussie-developed games that we are really, really looking forward to at DigitallyDownloaded.net is Quantum Suicide, a Japanese-style visual novel with a gorgeous art style, a bit of fan service, and a really intriguing premise. You wouldn’t know it wasn’t being made in Japan unless someone told you.

Tina Richards is one of the team leading the project, and for this week’s fast five interview we have a chat with her about that game, and the Aussie games industry in general. Quantum Suicide was a hit on Kickstarter, and stands as proof for the incredible variety of experiences that Australian developers can produce.

Matt S: What are you working on at the moment, and how’s it going?
Tina R: I am currently working on Quantum Suicide, it’s going well and we are pushing hard for a late 2017 release. Quantum Suicide is a game of betrayal, deception and romance in the cold depths of space and is a visual novel with dating elements. Recently I unfortunately had to announce a delay in its release, which I was quite heartbroken to do, but the community has been very supportive and reminds me once again that the Quantum Suicide community is in fact have the greatest game/fan community in the world.

Politics aside, I think we are lucky and have a wonderful industry filled with creative, generous and supportive people. I couldn’t think of an industry or community I would rather be a part of than the Australian game developer community and think I speak for the community when I welcome everyone to join us! Slowly we are seeing more support and funding coming from our state screen organisations (shout out to Screen Queensland giving us Queensland developers some love) and this can only see great things happen. Affording developers to both create and network will only lead to bigger and better things individually and for the industry!


Matt S: What recent game would you recommend to people at the moment, and why?
Tina R: It’s been out for quite some time, but I have been playing a lot of Overwatch recently. Its casual fun that you can play for 10 minutes or more that really just allows you to take a break from work. I haven’t had time with Quantum Suicide’s production schedule to really play much of anything, but Overwatch is keeping me sustained on the gaming front. I play a lot of Mercy and can’t help but see similarities between her and Quantum Suicide’s Beatrix…well, they are both blonde and medics…okay, so not that many similarities.

Matt S: What’s something you love about the general games industry at the moment, and what’s something you wish would change?
Tina R: I absolutely love the people in the games industry. I cannot wait until Melbourne International Games Week in October/November when game developers, industry leaders and players come together from all around Australia and the world. Spending time with others in the community is not only fun, you can learn so much from each other. As for change, in Australia specifically, I think we have a lot of aspiring and professional game developers who don’t network or socialise much and I would love to encourage them to come and meet everyone. The Australian developer community is extremely supportive and you will not regret becoming a more active member. We don’t bite, promise.

I love Hatsune Miku and synthetic singing so much, that Quantum Suicide’s theme song was created by Japanese composer FkTヨZ using Satou Sasara by CeVIO.