This is not a drill. We have new details about Atelier Lydie & Soeur: Alchemists of the Mysterious Painting! Gust and Koei Tecmo have released information about three characters appearing in the game, including a very familiar face. 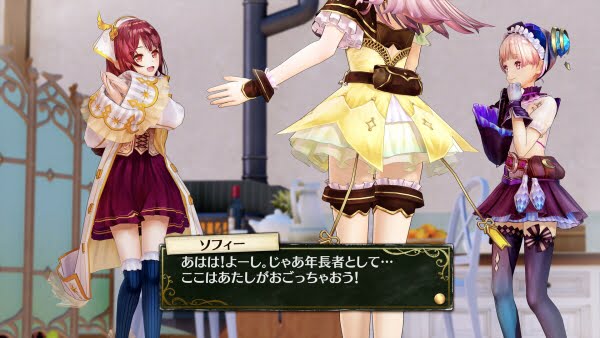 No, you’re not dreaming. Yes, that is Atelier Sophie. And yes, she will be appearing in the game! Sophie is continuing her travels, now as a senior alchemist with some amazing abilities that almost match those of her teacher. She gives the sister Lydie and Soeur advice. The sisters are also aided by Liane, who runs a shop called Lovely Firis where she sells what she hunts. They are, however, leery of the mild-mannered, serious yet playful Matthias. He volunteers himself as an escort to Lydie and Soeur, and his sword skills are (nearly) unmatched.

Atelier Lydie & Soeur is the third title in the Mysterious subseries from the larger Atelier series. The two teen sisters gain the ability to travel to mysterious worlds through paintings, where extraordinary items can be found and brought back to the so-called ordinary world. Synthesis is still a large part of the game, this time including Activation Items. Atelier Lydie & Soeur: Alchemists of the Mysterious Painting will be released in Japan this winter for the PlayStation 4, PS Vita, and Nintendo Switch.

The RIVE Limited Edition is what dreams are made of

I assume you’ve played Rive; if not, you’re kind of lucky because you can experience it for the first time! The title has only been available digitally to date for the PlayStation 4. That is changing though, courtesy of Play-Asia and its Limited Edition Lineup. 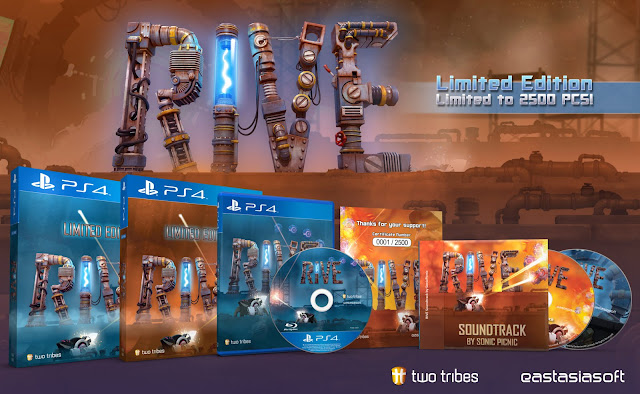 The RIVE Limited Edition box set is contained in an especially gorgeous collector’s box with an embossed logo. You’ve got two options here, orange or blue. Of course, there is a physical (region-free) edition of the game for PS4. There is a 20-page full-colour instruction manual, harking back to the days where one would sit and read the manual front to back before even popping the game into the console. There is a double-disc soundtrack containing 106 minutes of music divided into 40 tracks. And finally, there is an individually numbered collector’s certificate.

RIVE is a shooter/platformer hybrid from veteran Dutch developer Two Tribes. You can read Harvard’s review here; he describes it as “an excellent, if sorrowful, swansong” for the developer. You can pre-order the limited edition at Play-Asia, with the box set being shipped next month. If you want the blue box, pay a visit here. For the orange box, go here. Only 2500 total copies will be sold, 1500 of the blue box and 1000 of the orange.

Here is your introduction to the the world of Lost Sphear

With PAX West (Seattle) just around the corner, trailers have been dropping faster than I can keep up. Thankfully, this one didn’t sleep between the cracks. So without further ado…welcome to the world of Lost Sphear:

Lost Sphear is the next game from I Am Setsuna developer Tokyo RPG Factory. The above trailer showcases turn-based battles and mechanized suits. The game is due out for PlayStation 4 and Nintendo Switch on October 12 in Japan. Europe and the Americas will receive the title on January 23 on the same two consoles, plus PC.

For those lucky ducks attending PAX West, Lost Sphear will be playable at the Square Enix Booth (the game is published by Square Enix Collective). There will an official Twitch live stream on September 3 at 2:00 p.m. PT for those who cannot attend the event, AKA all of us here at DDnet!

This War Of Mine was a gripping take on those left behind in a war zone. I’ve played it on various consoles for well over 100 hours (mostly on iPad though), and that is a cautious estimate. The developer, 11 bit studios, announced its next title several months ago, but it is finally ready to show off the gameplay in Frostpunk. Take a look:

Much like in This War Of Mine, Frostpunk is reliant on surviving in a city where every decision comes with a cost. The earth has frozen over. And someone… you… need to shape society. That means establishing laws and customs that allow for the human species to survive. It’s a hefty responsibility.

Frostpunk will launch first for PC, but I would definitely expect to see it on consoles soon after. It will be playable for the first time in the Americas at PAX West, Level 4, Boot #133.