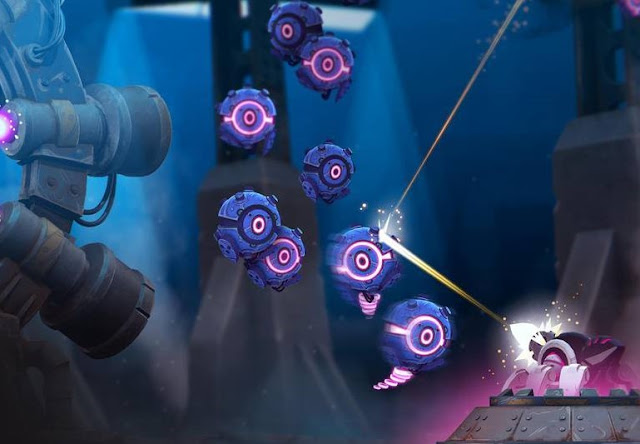 Rive is an excellent, if sorrowful, swansong for veteran Dutch developers Two Tribes. With an incredible backlog full of addictive titles such as Toki Tori, RUSH and EDGE, the studio developed a reputation for its minimalist games featuring exceptionally well designed mechanics. The reputation is upheld with Rive: it’s a frenetic game that slips between being a sidescroller and a run-and-gun platformer, complete with arcade sensibilities straight from the 90’s. Rive is intense, tight fun from some very talented developers – there’s a whole lot to love in this little package.

Rive plays just like any other 2D shooter – the left stick moves, the right stick shoots, and the face buttons are for switching between the various sub-weapons. Everything is responsive and everything is lightning-fast, so there’s no excuse for falling behind the game’s rapid pace. Maybe it’s the spider-tank talking but I got a distinct Metal Slug feel from everything. It’s not so much of a bullet hell shooter as it is a twitch shooter, with fast moving enemies and bullet patterns which reward instinct and reaction rather than precision. The levels are designed to keep you moving and constantly test the player’s ability with ever creative jumps and enemy patterns.

The game begins with Roughshot, a travelling space pilot low on fuel, docking his ship on an abandoned space station. Before long, he’s greeted by a suspiciously polite sentient AI who helps him warp around to different parts of the station, looking for fuel and learning of the station’s history. It’s a fairly lighthearted story carried by the interactions of the gruff Roughshot, who embodies nearly every space-western trope imaginable, and the AI who politely keeps wanting to introduce the player to their untimely demise. It’s a story which is worth a few laughs, though those without care for words can simply shoot the AI and end all exposition immediately. 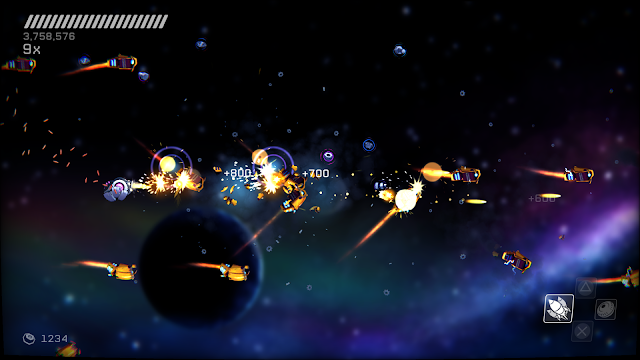 The main event here is undoubtedly the action gameplay, which Rive delivers in spades. The levels are designed for quick progression, throwing quick patterns of enemies at you and hurrying you along once you’re done exploding everything. One thing that sets Rive apart from other shooters however is that there’s a “more-ness” to everything: it’s not enough to just move through corridors and shoot things for example – levels need to be about shooting things while on a barge floating on a magma lake, or shooting things while suspended in an anti-gravity field while lasers approach on one side and sawblades approach on the other. Enemy design is much the same too. There is no such thing as a throwaway enemy; everything is a legitimate threat, even the most basic drone tries to ram you with unexpected vigour. Every mechanic seems carefully designed to keep players on their toes, so there’s never a quiet moment with this game.

By comparison, I was a little disappointed by the game’s boss fights. Perhaps I was expecting more visual spectacle, or for the bosses to provide a more pronounced challenge compared to the rest of the levels, but Rive’s bosses weren’t quite the terrifyingly memorable adversaries that similar titles have presented me with. The levels themselves still shine, and there’s excellent storytelling woven into how you progress through each part of the spaceship which gives context to the shooting, but a lot of levels felt like they were missing a big finish.

I had similar thoughts about the game’s hacking system – at any point you can hit R to activate your hack beam, which is able to pull certain defense mechanisms from the space station onto your side. Unfortunately, the variety of things which can be hacked is limited, and I kept finding myself saying “oh, if only I hadn’t blown that turret up I could have hacked it”. It’s an undoubtedly useful mechanic which is key to the game’s mastery, I just never quite got into the habit of it. The game’s normal mode is difficult enough, with a hard mode for the genre fans. The checkpoints are normally generous, letting players get straight back into the action without losing much progress, but there are still the tough segments which will test your patience. For those raised in the arcades there is also a 1-coin mode which is exactly as daunting as it sounds. All scores are aggregated based on how little you died and are ranked online and against your PSN friends, which is great to bring out the competitive edge in every player. There are also a variety of challenge and arena modes once you’re done with the main story, which some might say is on the short side but is endlessly replayable. 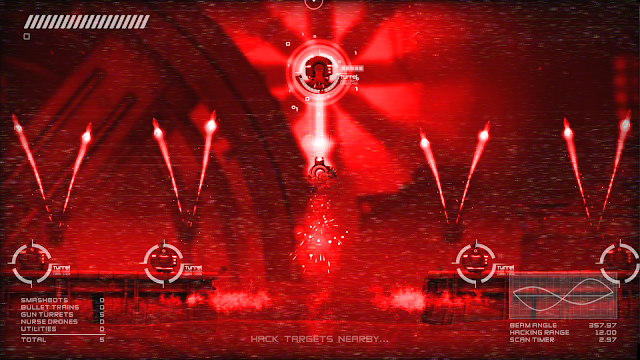 I hope it’s clear by now that Rive is excellently made, and I had a great time flying through space alongside Roughshot. It’s clear that the developers behind it were passionate about making the best experience possible. Rive holds its ground among the best 2D shooters available on PSN – it’s a title which I would readily recommend to anyone with a free afternoon and an affinity for twitch gameplay.