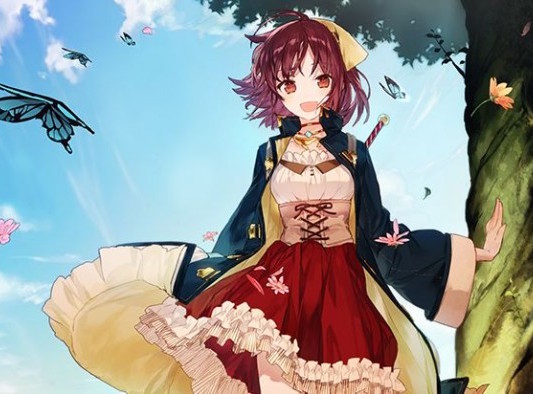 Do you know what I love so much about the Atelier games? The thing that elevates the series well beyond almost any other JRPG out there, in my estimation? It’s not the combat, though I have witnessed that go from being functional in the Atelier Arland series (Rorona, Totori, Meruru) to genuinely genre leading stuff in the Dusk games (Ayesha, Escha & Logy, Shallie).

My love of Atelier doesn’t even stem from the series’ main selling point, the alchemy itself. I do love pottering about with recipes and trying to craft truly intimidating bombs or masterworks that I can sell for a fortune, and I love how that side of the series has also matured over the years to become something complex, but equally accessible and enjoyable.

I don’t even love Atelier for the characters, though I’m certainly in love with just about every lady that’s led one of these games. The series developer, Gust, has such a sense of charm about its characterisation, so that the heroines can each be sweet and innocent, but also determined, intelligent, noble and focused. Most of the Atelier games are coming of age narratives in one way or another, and need likable, relatable leads, and Gust rarely fails us there. The supporting cast generally adds a healthy dose of honest fun to the experience as well.

But, no, Atelier appeals to me because Gust manage to craft such beautiful, pastoral, communal worlds. Towns and villages are places where people work together for mutual benefit, and it’s rare that a character has the slightest intention on doing anyone else harm, or exploiting them to uneven gain. With so many JRPGs being aspirational in nature, focusing on personal achievements, the accumulation of wealth, and plots involving political intrigue with each side coming to destructive loggerheads, it’s nice to have a game that is more interested in the ideal of community. It’s “grass is greener on the other side” stuff, in game form.

In most Atelier games, the landscapes, similarly, feature consistent serenity and pastoral aesthetics. This often belies the threats within the landscapes – because enemies can be challenging things indeed – but the peacefulness that is about the typical Atelier game gives it an almost unique tone, almost more Harvest Moon than Final Fantasy.

In fact, that is how the series director, Yoshito Okamura, described the games to me when I interviewed him in putting together my book, Game Art. To Okamura, Atelier is Harvest Moon thematically, in which people live out their daily lives with a spirit of positivity and pleasantness, and while there’s combat, it’s there more to help drive people to experience the full narrative of the game than as core component of the experience in itself. 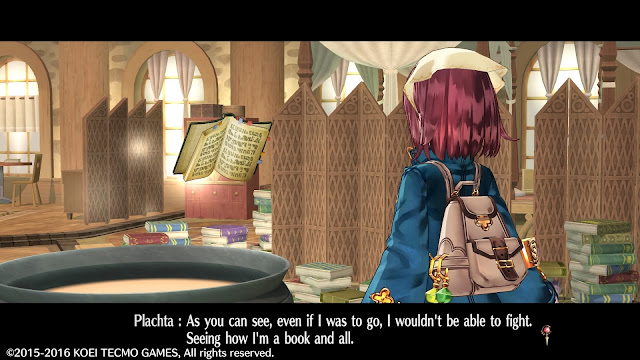 In short, what I love about Atelier games is that they are overwhelmingly nice. And the latest title in the series, the series debut on PlayStation 4, Atelier Sophie, is just so nice that I don’t even want to stretch for a different word to describe it. It’s almost overwhelming.

As is traditional for the Atelier series, Sophie is a young and inexperienced alchemist, with the ambition to make alchemy her career, and the desire to use it to the betterment of those around her. She’s part of a small community, which dotes on her, even as she makes even the most basic of alchemical recipes blow up in her face. She has a few friends, who go out with her to protect her as she gathers the ingredients that she needs to continue to develop her talents.

Sophie discovers a book, left in her grandmother’s alchemy lab, and is shocked to discover that this book is enchanted, and able to communicate with her. It’s also, clearly, a powerful book, but unfortunately it has lost all memory of who it is and the purpose that it exists for, because all of its pages have faded. So Sophie has a new quest: to discover new alchemical recipes to write into the book, which will bring back its memories and lead Sophie to all kinds of new adventures. 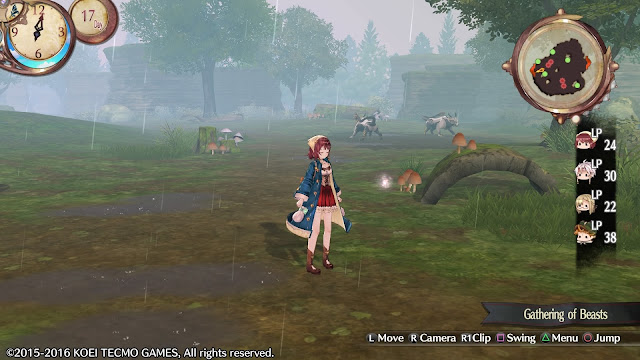 This set up offers the right mix of charm and humour to hook players in right away. I enjoyed the gentle subversion of the traditional amnesia JRPG trope, whereby the hero at the centre of the story starts out with no memories of who he or she is. It has always been a clumsy metaphor for birth and growth as the hero slowly pieces together their past, but in Atelier Sophie it’s a peripheral character with the amnesia, and Sophie starts out as a fully developed character.

The dynamic between the two is really strong, too. The book is a sensitive sort and tends to get offended by Sophie’s ability to say something naïve and put her foot in her mouth. The cast that surround Sophie are a fun bunch too, and the group, as it grows, has a good dynamic whereby there aren’t really any heroes, but rather the vibe is of a bunch of friends on a journey together. I will say that, as usual, Gust struggles more with the male characters than the women. The boys tend to be either stoic to the point of being boring, or just plain irritating, but it’s a minor complaint, and I was too invested in the girls to really care anyway.

For anyone who hasn’t played an Atelier game before, the way the mechanics jigsaw all fits together is really quite beautiful in execution. You’ll need to send Sophie out on adventures to collect ingredients from the world in order to craft objects, which can be either for the party’s use (healing items or bombs, for example), or to fulfill requests in town and earn some cash. To get these ingredients, you’ll either gather them from different regions of the world (each location offers up different resources), or by fighting enemies, which yield resources on defeat. 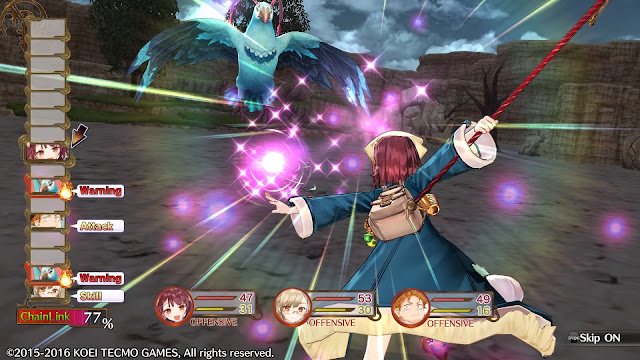 So Sophie will need to get powerful and alchemise up powerful items in order to get the better ingredients to make better items and fulfill more challenging village requests. It’s a simple gameplay loop, but endlessly addictive stuff, especially when progress is tied in to doing all of these things. Along the way Sophie also develops deeper bonds with her allies, fills in the pages of the floating, talking book, and the game’s more broad narrative becomes apparent (and, no, I won’t be spoiling it, but it’s fun stuff).

Previous Atelier games have dabbled with time limits to try and push you to play at a certain pace. Though these time limits have always been generous, they have always been a point of contention for some players, that found the experience stressful. Sophie pulls right back on the time pressures, allowing you to explore the game largely at your own pace, though there is a day/night cycle, and days to tend to float by if you allow them – mostly without penalty, but there are time limits to quests and so forth that will make you at least contemplate some basic time management.

As I mentioned before, this is the first time that Gust has brought an Atelier game to the PlayStation 4, and the impact that the hardware has had on the franchise has been minimal, though I don’t mean this in a pejorative sense in the slightest. Atelier games have always prioritised aesthetics over technical flare, and this one is no different. Environments are small, and tend to be sparse in design, and character models are cel shaded in order to conceal how basic they are in construction. But this art style marries so well with the serenity of the narrative, the breathtaking music score (seriously, Gust’s sound team is the best in the business), and the characterisation that the simplicity of the aesthetic is turned into a positive feature. Atelier Sophie is minimalist in construction, and executes to that design principle perfectly. Every new environment was an absolute joy to experience, and every character a delight to encounter. 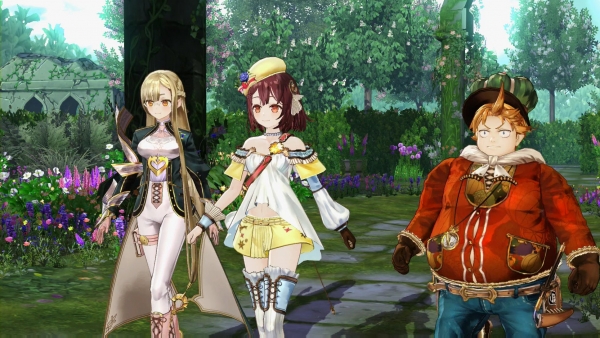 The little details really make a difference, too. Each character’s costume is spectacular, creative stuff, and in combat, the quality and fluidity of the animations makes for some dynamic excitement, despite being turn-based. It was a nice touch to have dynamic weather effects, too. I loved those moments where Sophie would remark that she saw lightning in the distance, and then for a gentle downpour to give the environment a nice, cool atmosphere. Transitions between day and night were also quite beautiful. I know that some reviewers are going to chalk the visuals in this game up to being “too simple” or “average,” but to me they reflect the theme of Atelier perfectly; elegant, graceful, charming, and minimalist.

Related reading: Gust also produced the divine Ar nosurge, which is essential if you’ve got a PlayStation 3 or Vita.

One area where Gust – via Koei Tecmo, one suspects – has really pulled back with the series is the sexualisation. Where previous Atelier games have been quite comfortable with the fanservice, Atelier Sophie takes a softer touch here. Perhaps this is a sign of the series is starting to push more towards mainstream appeal (in Japan, at any rate), and where former otaku JRPG rival, Compile Heart, has been doubling down on the underwear and boob jokes, Atelier has veered towards a more nuanced approach to sexuality. There’s still a little of it, but it’s far more subtle and it has been focused on less than in some games previous. Whether that’s a problem to you or not, I don’t know, though it isn’t to me. It’s nice that other Atelier traditions have remained, though; when Sophie happily and pointlessly yells out “taru” after seeing a barrel, it’s delightful stuff. I had a moment.

The Atelier games are smarter than almost anyone gives them credit for, and Atelier Sophie is no different. The gentle coming of age narrative, coupled with the pastoral setting and likable ensemble cast, make for a very fine start to a new trilogy (we assume) in Gust’s marquee franchise. Sophie herself is beautiful and adorable, and I hope she gets to come back in the other two games in this series come (we assume), because with her, Gust has a new heroine that deserves real attention.

This week on the DDNet podcast: The PlayStation Vita; what a console