Ken Follett’s books were there for me as I was growing up. His brand was that type of fiction thriller that is heavily spiced with historical authenticity. I mostly recall his Eye of the Needle, set in World War 2 (and also made into a movie, just to so it could prove once again the enigma about the book being better than the film). I also hold some fond memories off the brink of World War 1 through The Man from St Petersburg. If pushed to put a label on it, I will do Follett severe injustice and compare his style to Dan Brown’s sans the occult.

As one can probably guess, Ken Follett’s The Pillars of the Earth is a video game based on his 1989 book The Pillars of the Earth (which was also turned into a 2010 TV mini series of the same name, that featured Eye of the Needle’s Donald Sutherland, amongst others). All three incarnations take place in 12th century England and tell a fictional yet historically reliable tale revolving around building a cathedral at a time of throne succession turmoil: King Henry, the son of William the Conqueror, dies without a male son to take his place, triggering a dispute between potential candidates. I will more or less leave the rest of the history lesson to the game itself for the remainder of this review.

The video game incarnation of Pillars of the Earth belongs firmly to the point and click adventure genre; think about it as a sort of a medieval Agent A. Affairs are divided into three separate books, each containing multiple chapters (i.e., what us gamers normally refer to as “levels”). Each chapter comes with its own setup that, being very narrative driven, follows up on their respective predecessors. You do, however, get to play as different characters, occasionally even within the same chapter. It is important to mention I only had access to the first book out of the three for review, with the other two planned to be available on release. 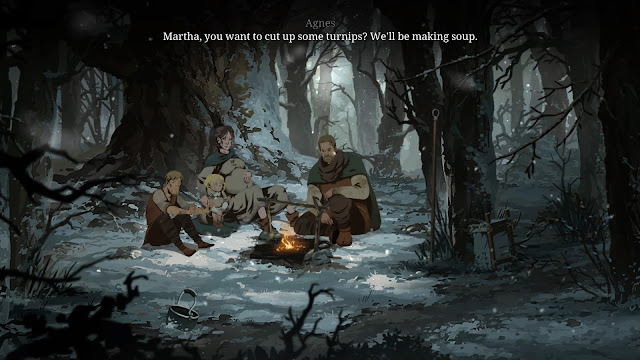 That first book was completed by yours slowishly during a single digit number of hours, but just so, during which the playable characters were required to fulfil various tasks revolving around the unique historical setting. At the mechanical level, I explored the chapter’s map to identify points of interaction, talked to people along the way, located items, then interacted between people and objects – simple puzzle style – in order to achieve the next specific goal the game had laid out before me. In terms of narrative, this means Pillars will have you performing actions such as hunt for food, set off a fire, or forward highly political messages between the power duopoly of medieval England, the nobility and the church.

Although the game might try and make you feel like there is urgency in the air, there is no real action to talk about in Pillars; affairs are generally static. Yes, you need to interact in order to trigger the next thing, but you are not required to rush as you go about your way. Once you perform that right interaction, a cut scene will be triggered, opening the path to the next challenge. What I am trying to say here is, very little in the way of skill, either in the form of dexterity or intelligence, is required of the player. Affairs thus feel rather passive, not video game like; it’s actually rather book like.

Which brings me to my biggest gripe with the game: its clunky nature. This is evident everywhere, in the jerky graphics as characters move about, as well as in the constant pauses. It’s acceptable to have to wait for a cut scene to load, but it far from acceptable to have to wait for the next loading to finish in between every two words uttered at a cut scene (and yes, this did happen to me). Given all the meticulous care Pillars of the Earth takes in order to sink players into its medieval England setup, nothing could ruin the suspension of disbelief more. 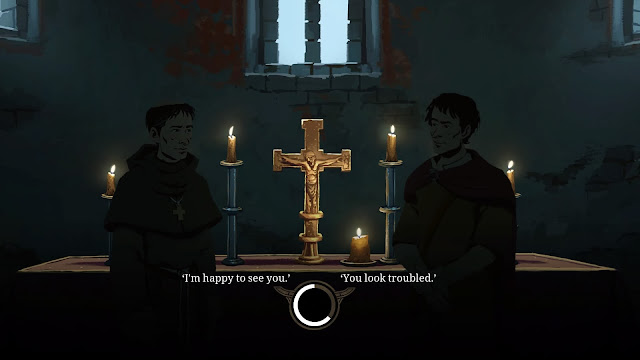 I guess the clunkiness goes hand in hand with the slow nature of the presentation. Don’t get me wrong, slow is not necessarily bad; most of the good things life has to offer are better experienced slowly (yes, I know what you’re thinking of – that, too!). There is, however, a borderline between being slow and being tedious, and Pillars often errs to the wrong side. Like, when it sends you to find that third weakness in the structure of a castle; yeah, I learned from it, but surely the task could have been designed to be more involving rather than the third time I was asked to do the exact same thing as before?

The nature of the experience often had me put the controller by my side, so as to allow me to exercise my right to sip some quality latte while Pillars is dragging its feet. Only to scramble for it in a rush as the end of the cut scene had my character poised to make a time limited choice between several options. Yes, Pillars utilises a choice making system all Commander Shepards should remember very well from Mass Effect. Unlike Mass Effect, Pillars of the Earth did leave me wondering whether my choices/actions/inactions actually made a notable difference on the way the game progressed; I get the feeling this is not the case, really, but I will admit to not to being able to set things up so as to allow me to conclusively verify this. Which says something on its own. What I can definitely say is that, at the end of each chapter, the game counts your key decisions.

Given all of the above you probably got the impression the experience of reviewing Pillars of the Earth was more traumatic than a Navy SEAL’s graduation test. Fact of the matter is, just like that successful soldier, I found the experience quite rewarding. There is a lot of irony in an atheist of a Jewish background finding much pleasure in a story concerning itself with the erection of a Christian cathedral, but that has indeed been the case. When all is said and done, the story told by Pillars is a very good one; even better, the experience of playing it is a very educational one. 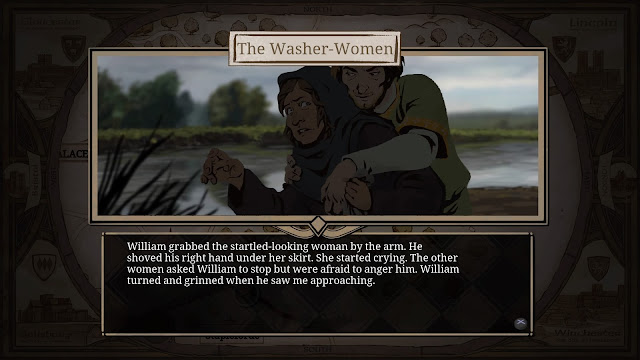 By playing through authentic experiences, I learned a lot about life in medieval England. I looked for a job; I took care of starving refugees; I witnessed first hand how windows used to work (hint: no glass). I saw how the economy worked, I experienced the different castes of people so as to witness the relative ease with which one can become an outcast. I genuinely felt what the constant threat of starvation feels like. And I was also able to observe how grim life in general was back there and then, between the cold of the weather and the brutality of men.

Consider, for a second, life without coffee! The horror! Or the almost comical level of ignorance compared to modern days (think: science vs. its total absence), and the effect this used to have on the way people perceived reality while perfectly accepting the supernatural. The biggest lesson, though, relates to the role of religion, Christianity, in maintaining and enforcing social order; it follows suit almost naturally given the theatre of the absurd (yet very authentic) setting.

I would argue that this is exactly what video games are for, the reason why – through being at the cutting edge of technology – they offer us cutting edge art: Pillars of the Earth clearly demonstrates how video games, when played attentively, are the most advanced tool currently available to humanity with which the masses can experience the completely foreign and learn from it. Sure, Pillars isn’t perfect at what it does, through technical glitches and a tendency towards the too passive side of things, but the potential is clear. 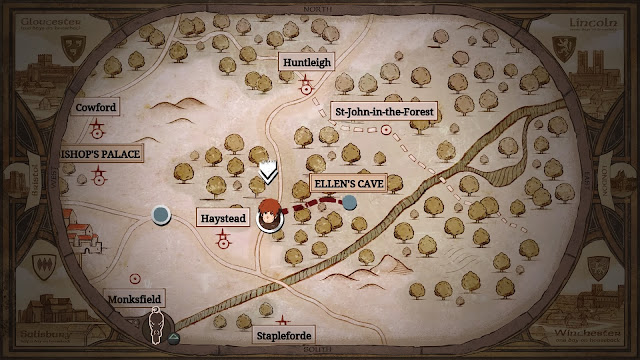 If you are the type that engages in video games for the quick thrill, then Pillars will probably drive you crazy and you should stir away. However, if you are fine with the other extreme, do not mind lack of arcade style challenges and are willing to take your time, then Pillars offers the depth and the learning experience that mere mortal books cannot deliver. Speaking for myself, I thoroughly enjoyed the experience Pillars had provided me with for that very reason.