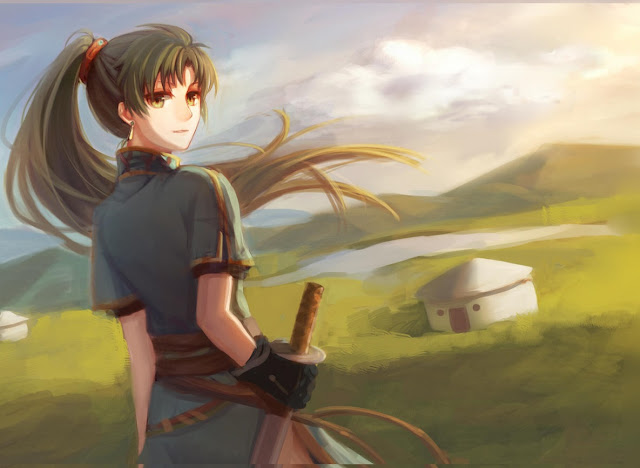 In hindsight, we got so lucky with Rekka no Ken being the first English Fire Emblem, because when we first booted the game up the very first character in Fire Emblem that we met was Lyn. That introduction set the tone for the entire series perfectly; thanks to Lyn, I was immediately hooked into that game, and I do wonder that if I hadn’t fallen immediately in love with her, whether I would have remained so interested in the series over the many years since.

Lyn is a truly special character, and it’s not surprising to me in the slightest that when Nintendo held a poll to figure out people’s favourite Fire Emblem characters, Lyn was right at the top. She was so many people’s introduction to the series, so the nostalgia is strong with her and that certainly drives some of her popularity, but also, in Lyn we had a female protagonist that was resourceful, empowered, and important. Our introduction to Lyn was that she’s a person living by herself in the rugged wildlands, and putting down lecherous bandits through her swordcraft. Compared to today, where there have been improvements in the representation of women in video games, but they are still not what you could call “excellent,” this kind of female protagonist was even less common back in 2003, when Fire Emblem was originally released. 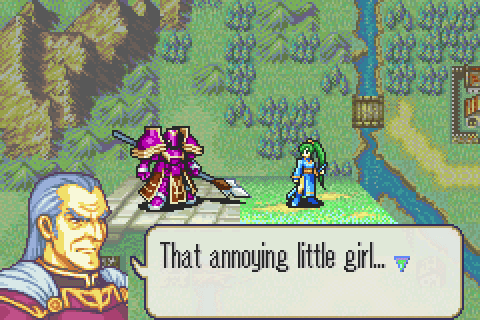 So many female videogame characters back in those days were victims in need of rescuing, the meek and placid support character to the male hero, protagonists that were actively denied their sexuality in order to make them less feminine and therefore something that the boys could still enjoy playing as, or, at the other extreme, defined completely by their sexuality (i.e. sexualised), and therefore something that boys would enjoy playing… with. Princess Peach, Final Fantasy IV’s Rosa, Samus Aran and Lara Croft, for people playing along.

If there was an earlier example of a female protagonist that somehow managed to so completely avoid every single one of those character design “traditions” than Lyn, I’m suffering from a mental blank at the moment, because I can’t think of one. Lyn is the perfect character. She’s strong and resourceful, as we discover from the very first moment that we started playing Fire Emblem. At the same time, she’s not denied her femininity. In fact, she’s an utterly beautiful and sexy woman, wearing a dress that is cut off on both sides to show her legs, which are so long they seem to go on forever. And yet, at the same time as that, Lyn’s never sexualised. Through the bulk of the game, we only ever see her face as she talks to the other characters. The rare art still pops up to display key moments, but in none of them is there fanservice. No panty flashes, and no compromising poses to emphasise her womanly bits. Lyn’s just present in those scenes, and her clothing is presented as something normal and everyday in the context of her character, as opposed to fetish wear for the benefit of the players.

I fell instantly in love with Lyn, and because I was so immediately connected with that one character, I became engaged in her whole quest (to save her grandfather from her uncle, another lovely subversion on the damsel in distress standard fantasy structure), and this allowed me to really pay attention to the other characters that joined her quest. Contextualised through their relationship to Lyn, I cared about the lot of them… particularly considering there was that spectre of permadeath hanging over them all. Permadeath only works as a concept if you care about the characters on some level enough to miss their presence. Fire Emblem had me sweating every decision – particularly since, as it was my first Fire Emblem, I wasn’t really sure on the best strategies to approach the game with, and I found the going rough at times as a result. 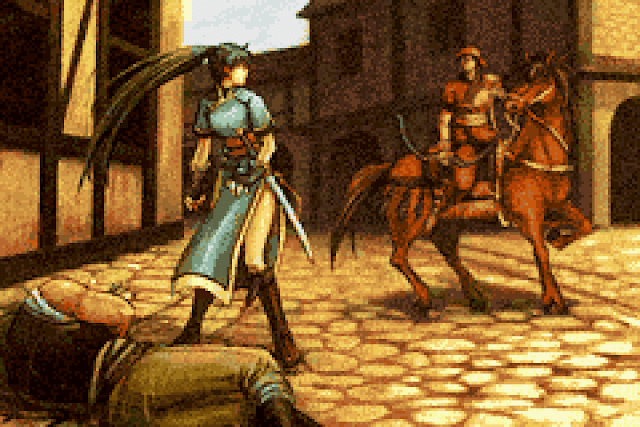 I was absolutely gutted when, after a dozen or so levels and having rescued Lyn’s grandfather, the entire quest was revealed to be a glorified tutorial. Lyn went away and regal prince Eliwood and his oafish prince buddy, Hector, became the focus of the story. Those two were good characters in their own right, don’t get me wrong, but after spending so many hours getting to know Lyn as such a wonderful female protagonist, to switch back to the standard story of dudes saving the world was a step back.

But, of course, Intelligent Systems had one more surprise in store for us; Lyn would rejoin the game, and not as a subservient character to Hector and Eliwood, but as a lord in her own right. This was significant; with the permadeath feature, any of the normal characters could be killed and the game would power on, but if any of the three lords were defeated, it was an instant game over. Furthermore, her status as a lord meant that you could power Lyn up to an obscene degree, using an special item that was hard to come by, and only the lords could use it. She may have been the “tutorial” character, but her role in the “main” story made it clear that Lyn was fundamentally important to the entire game, even as it worked hard to juggle a large ensemble cast, including two other principal protagonists.

That Lyn was the first experience many of us had with Fire Emblem will forever make her a special character, even as Nintendo refuses to recognise her. Fire Emblem Warriors may include Lyn as a DLC character – if we’re lucky – and she won’t be core to the plot. Instead, Nintendo and Koei Tecmo is focusing that game on the more recent Fire Emblem titles, which are all very fine games in their own right, but no, none of the cast come close to the potency of Lyn as a character.