Ah, the seventies, I’m sure my parents remember them well. The handlebar moustaches, the slick looking giant shades, bell bottom jeans, casual murder. Well, perhaps not that last one so much, but Serial Cleaner is certainly a breath of fresh air in bringing that and the 70s together.

Serial Cleaner is about a man named Bob, otherwise known to hardened criminals as “The Cleaner”. It is Bob’s job to ensure that murders are covered up by cleaning the scene of the crime, dumping the bodies where no one will find them, and stealing the evidence. Bob does his job well, and he looks good doing it too. Bob was the epitome of seventies fashion, the Ray-Ban shades, Sonny and Cher bell-bottoms, a Ford Country Squire to transport dead bodies in, as well as a moustache and sideburns. Though none of what Bob wears is officially branded, it is instantly apparent what they were all inspired by, and it’s a good thing too, all these objects contribute to a genuine seventies feel.

Though the main goal of Serial Cleaner is to ensure that Bob’s employers are free to live their criminal lives, Bob actually has a life outside of his dirty work, and it is actually quite touching. Bob lives with his mother, someone who Bob absolutely dotes over throughout the entire game. At differing points, Bob is seen complimenting his mother on her cooking, circling suggestions for television programmes in the TV Guide she may be interested in, as well as letting her know how long he will be out for. His mother loves Bob just as much, though she does not know of his operations outside of the house. There is a point in the game where Bob’s mother gets incredibly excited that Bob has a friend to watch a boxing pay per view with, offering a genuine background to a character and actually make him relatable in a strange way.


Murders take place in a variety of locations, such as a gym, newspaper printing office, warehouse and more. In most cases, Bob needs to get rid of two or more bodies, vacuum up a set amount of blood (yeah okay we all want a vacuum that is that good, frankly), and steal some evidence. As each level is an active crime scene, police are constantly scouting the area. The police operate very much like Metal Gear Solid, with each officer having a “cone of vision” of sorts, and if Bob is seen by an officer, they will chase him down until either they reach him and smack him with their baton, or he escapes their vision long enough. Bob can also hide in a locker, box or dumpster, which is also a good option, though it’s strange that when Bob hides in a locker directly in front of a chasing officer, they completely get bamboozled by Bob’s ability to enter doorways.

If Bob gets caught, the level starts over completely. The bodies and items are randomly placed around the level. Strategies change constantly because of the randomness, and offers a refreshing take on having to try a level over and over again. There are also hidden collectibles in each level that either give Bob a completely fresh look or a seventies movie inspired level (think Taxi and Big Trouble in Little China). Bob is also equipped with “Cleaner Sense”, whereby pressing L2 zooms the camera out to show the entire level. This then labels everything, from where the bodies are, hiding places, evidence and such. This becomes increasingly useful in later levels when intricate planning is almost required in order to complete each level.

As the game progresses, it becomes more and more apparent that Bob is a part of something much bigger. I won’t spoil it here, but watching news reports on television, listening to the radio and reading the newspaper offer clues as to what’s going on in the bigger picture. It’s an optional side to the narrative, but it’s effective as you start to piece together everything and come to the realisation that Bob is where he is for a reason. 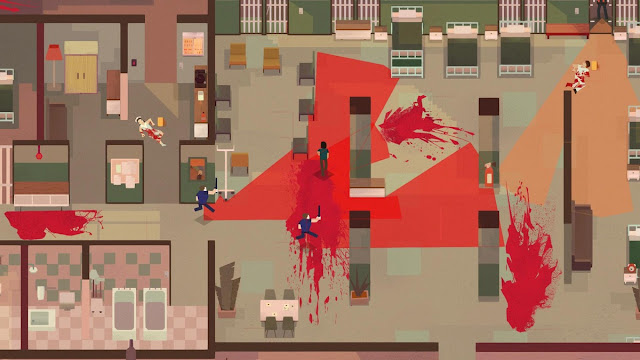 Serial Cleaner’s art style is striking for a number of reasons. First of all, it employs a simplistic visual style that is reminiscent of old Commodore 64 titles, while at the same time maintains a high resolution so it isn’t exactly 8-bit and pixelated either. Every item in the game is accentuated with hard lines, giving everything a polygonal look and feel to it as well. The team behind this game have done a wonderful job capturing the seventies aesthetic.

Serial Cleaner is one hell of a game. It captures the style and appeal of the seventies greatly, layering it with a surreal ‘job’ to do, and a solid sense of humour. The relationship between Bob and his mother could almost be the foundation for a visual novel series, an anti-Phoenix Wright if you will. The reward of hidden objects and achieving 100 per cent cleaning on every level offers incentive to come back for more. The squeaky-clean mechanics combined with the six-foot deep strategy offers an engaging experience worth tidying up for!