You, the heroine, are not having a good day. You’ve got work to go to, a relationship you just got into to deal with and on top of that, a little creature named Orion has accidentally made his way into your head and wiped all your memories. This is the setup for Amnesia: Memories, an otome visual novel developed by Idea Factory and originally released in Japan for the PSP in 2011 – now seeing an international release for Steam. Like many other otome games, the premise revolves around you getting to know and dating a male character of your choice, but Amnesia throws in mystery and suspense elements into the mix to create a truly compelling experience.

Related reading: For an example of a brilliant otome game, you can’t go wrong with Hakuoki. Available on many, many different platforms now. Matt’s review of the iPad edition.

Amnesia plays like any other modern visual novel: you watch a story unfold through text and art, and you make choices at certain points to decide which direction through the narrative you want to go. Unlike more traditional dating sims, which have you working up from strangers to friends to lovers, Amnesia throws you straight into the early stage of a relationship, starting at the point where the heroine has lost her memories. From here, she needs to piece together who she is, what her job is and whether the people around her are trustworthy. This is still very much a game about romance, but it is refreshing how it tackles a different stage of a relationship and explores the difficulties of establishing a committed romance out of the awkward first date phase.

In addition to the romance, there is a strong mystery narrative running underneath the four routes revolving around Orion and how he got into your head in the first place, as well as a mysterious green haired man named Ukyo who at times helps you and at times puts you in harm’s way. There are a huge variety of endings (although admittedly a lot of them are bad endings), decided by a “parameter” system which measures how much affection the chosen boy has for you, as well as how much the people around you suspect that you’ve lost your memories. Ideally, your boyfriend would be supportive and help you learn about the person you once were, at which point Orion would no longer need to meddle in your affairs and your life would go back to the way it once was. A quick tip though – each male lead has a card suit motif: Shin (red) has hearts, Toma (yellow) has diamonds, Ikki (blue) has spades and Kent (green) has clubs. I didn’t think too much of most of the protagonists to be honest, and each of them has some characteristic which makes them a suboptimal choice, but I’ll refrain from spoiling the experience. At the very beginning of the game, before you even get to meet any of these men, you’re asked to pick a card suit and this choice railroads you into dating the respective character for the entire route. It’s necessary for the game’s in media res nature, although it is a bit annoying when you find yourself rushed into a relationship with someone who you clearly don’t want to date.

To truly engage with Amnesia I think one would have to identify strongly with the protagonist, which I unfortunately had a great deal of difficulty doing. The heroine is not afforded many lines at all and the ones she has are mostly for conveniences’ sake – most of the dates she goes on involve the boy of her choice monologuing towards her while you click onwards hoping for something interesting to happen. Instead, all the exposition is handled by Orion, which isn’t entirely a bad thing as his voice is lighthearted and compassionate, although it does mean you’ll spend much of the game being talked at rather than talked to. If you don’t mind a passive protagonist and are satisfied with looking at eye candy for a while then this isn’t a problem, but Amnesia’s heroine has far too little personality for my taste. This is evident in the way all the routes are structured, as diving headfirst into the arms of your chosen suitor will generally earn you the good ending, while being cautious and playing your cards safely will earn you a bad end (which can be surprisingly gruesome at that). Once you break down your options you’d be surprised at just how little choice you actually get over the course of the game.

From her quiet approval of all the craziness around her and the nagging of Orion, I found that I ended up struggling through much of the visual novel. It doesn’t help that the overarching mystery spans all the arcs so you’ll have to date all the boys to see exactly why our heroine has amnesia, and after a dozen hours of Orion and various pretty boys lecturing to you it’s hard to not get weary. 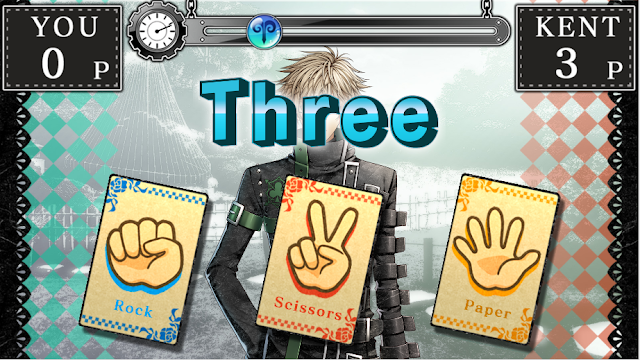 That being said though, the game is carried by its high production values ranging from well-drawn characters, interesting backgrounds, evocative CG’s and a strong soundtrack. It’s clear that Idea Factory put in a lot of work to making the overall package one worth playing. If you get tired of the story, you can break the tension by playing rock paper scissors or air hockey with the main characters, earning some cosmetic rewards if you manage to beat them all.

Related reading: And the best visual novel ever is, hands down, Steins;Gate. Matt’s review of the PlayStation Vita edition.

Amnesia offers a solid narrative which you don’t need to be an otome-game fan to appreciate. There are issues with the way the story is told which might raise some eyebrows, and the plot is certainly melodramatic at times, but the art and music really carry the player along towards the memorable ending.