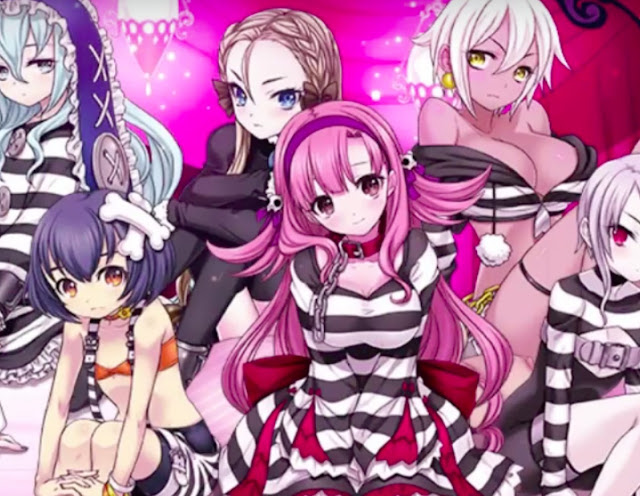 The first Criminal Girls was a game of real potential. Though clearly limited in budget, and controversial for a very obvious set of reasons (anime girls wearing little and posed in compromising positions are generally going to raise eyebrows), the game was clever reference to the Marqis De Sade and 80s prison exploitation films, and was well supported by a creative and interesting combat system.

Related reading: Matt’s review of the first game goes into further depth on the thematics underpinning of the Criminal Girls series.

To get the unfortunate thing out of the way first; the sequel doesn’t quite manage to build on that potential, and I’ll get to that in a moment. That disappointment aside, the core of the game remains utterly compelling stuff; the combat system is as vivid as ever, the art style is gorgeous, and that minigame in which you slap, rub, and feather the girls is even more ridiculous, over the top, and entertaining than it was in the previous game.

In my review of the original Criminal Girls, my primary complaint was that “the game lets itself down by straying from its thematic vision far too often for its own good.” This issue is at the core of any complaints I have about the sequel, too. This game is, in theory, a complete homage to prison exploitation films, in which you play as a male “guide” whose role is to S & M (actually, technically just the “S”) a harem of “delinquents,” or bad girls, until they realise their wrongdoings in life, atone for those sins and, ultimately, escape from hell. 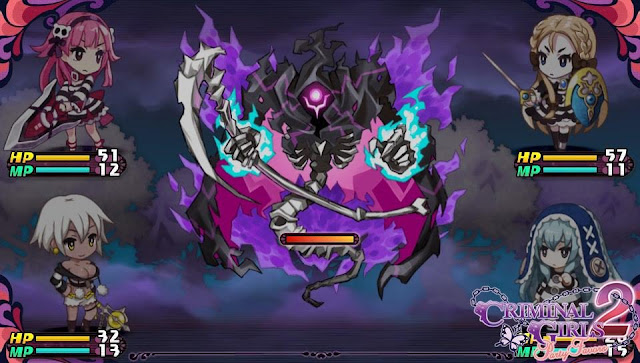 If this sits well with you, then there’s few other developers that would even try something like this, and the sense of humour built into the game is quite appealing. Each time you acquire a new S & M tool, you’ll head into the minigame for that tool and the girl will be there in a new pose so utterly ridiculous that you’ll have to laugh. Each girl can acquire “levels” of submission by having the tool used repeatedly on her, and as the level goes up, the explicitness of the scene being depicted also steadily ramps up.

You’ll know if that doesn’t sit well with you, but the problem with the Criminal Girls games is that outside of those minigames the characters don’t behave like the delinquents that are supposedly in need of “discipline.” It’s like the developers came up with a wildly excessive and extreme concept, got halfway through realising the vision, and then decided to hedge so they weren’t appealing to too small of an audience. Instead of behaving like the truly screwed up people they’re meant to be, the girls are a series of fairly standard of ecchi harem anime tropes, from the tsundere through to the loli and on to the airhead and big busted loud woman. Right from the outset, these girls actually behave quite heroic and noble to one another (and you as their master), aside from the rare snide or insulting comment. This is something I expected the developers to address in the sequel, but as it is Criminal Girls 2 remains an intriguing little concept that is in bad need of more consistent applications of its themes.

The mini games are great though, and an improvement on the predecessor not just because in some of them you’ll be playing with two girls at once (previously it was a strictly one-on-one affair). As in the previous Criminal Girls, these minigames require you to do something with the touch screen to simulate doing something to one of the girls. The first tool you get is a brush and tasks you with rubbing hot spots on the girl as they show up. The second tool is instead requires you to tap on the girl in key spots in time with rings that appear on circles. It’s not exactly Hatsune Miku in terms of the quality of that pseudo-rhythm game (hey now there’s a DLC character for you, NISA), but it works well and the feedback is good, and there is an noticeable improvement to the quality and playability of these minigames over the first game. 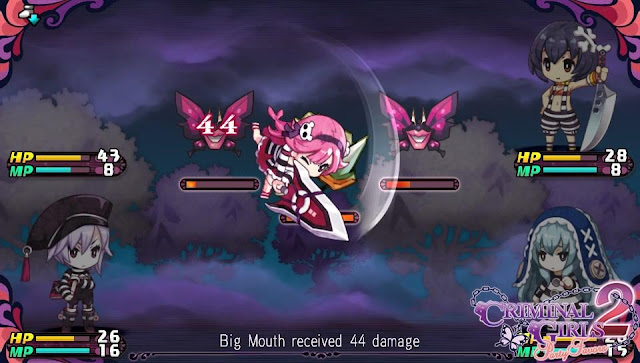 Visually, the minigames are far more dynamic, too. In the previous game each S & M session played out on a single screen. This time around the girl only fills a section of the screen, and the camera will scroll around, based on the parts of her body that you’ll be interacting with. This gives a much more detailed look at the character (which, let’s face it, is quite important in a game like this). It also has the effect of making the minigames more visually interesting, as the panning camera helps give life to an otherwise fairly static piece of art.

Oh, and there are minigames with two girls now. Did I mention that?

The JRPG side of things remains quite refined, original, and fundamentally interesting, and the turn-based combat never manages to become dull – especially now that there’s a better balance so that it’s not as easy as in the first game. The whole reason for going through the whole sadism routines with the girls is that this is what unlocks the skills that they can use in battle. Then, each turn, each girl in the active party will pick one of the her learned skills at random, and suggest to you that she wants to use that ability in that turn. With four girls in battle at any one time you therefore have access to four skills at a time.

This randomisation of available skills in any single turn really gives the combat system a unique strategic thrust. Suddenly you won’t be able to rely on trusted attacks over and over again. Suddenly you won’t be guaranteed to have access to healing spells at just the right moment that you need them. Instead, you’ll need to learn to plan ahead and prepare for major problems in advance. Though Criminal Girls 2 isn’t an intensely difficult game, the difficulty spikes and boss battles can be sharp, and that’s what the first game needed; something beyond the novelty of the system to keep players as interested in it at the end as they were at the start. 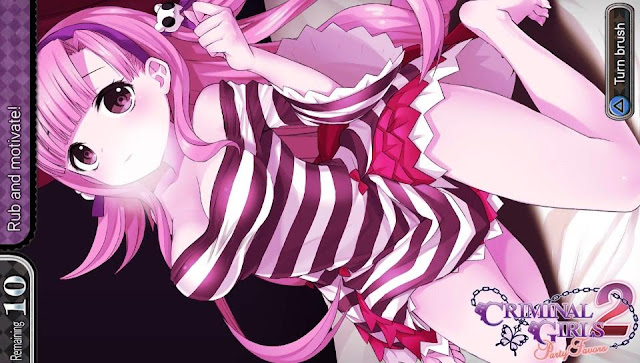 The developers have also implemented a few new quirks into the combat system to give it a couple of extra layers of strategic depth. There’s a new “S & M” system, in which each time a girl levels up, you’ll get to choose between two different skills. One will sway her towards “S” and the other “M”. Not only is this a handy way of giving you more control over your character’s development, but in battle you can choose between a couple of different “inspiration” effects that will affect all the girls in battle. Some will boost “S” girls while weakening “M” types, and others will do the inverse. Building a party to take good effect of these inspirations is a core strategic consideration in Criminal Girls 2, and certainly had me considering my party balance more than in the previous game.

Beyond all of this, Criminal Girls 2 will be memorable to me, as the first will be, because it holds an undeniable ‘X-factor’. I find very hard to qualify why I like these games so much, but I was indeed more excited to boot this one up than I am when I play with most games. The simple sprite work for the overworld map and combat is appealing, consistent, and a nice, cheerful, contrast to the seedier content. That seedier content is stunning in all its pin-up glory, too. The music settles into the background quickly enough, but it fits with the game’s tone well, and there’s a meaty quest in the overall game, without it being excessive.

While I don’t think Criminal Girls 2 goes anywhere near far enough to be the extreme Sadean experience that it clearly wants to be, at least we have a game that achieves something down that path. Art needs extreme experiences, and genuinely extreme experiences (aside from those laden with gore) are rare indeed in this industry. Kudos to NISA for not only taking a chance on the first Criminal Girls, but backing up its faith that people do appreciate this kind of experience by localising the second too.