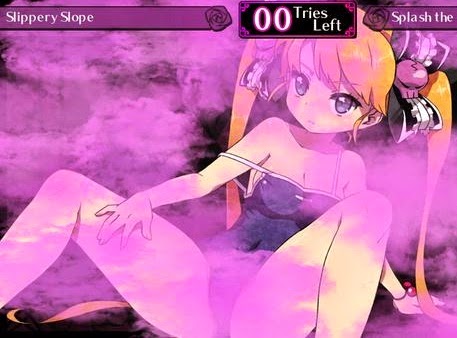 “Oh my, this game is going to be controversial.” These were my thoughts almost immediately after I started playing Criminal Girls: Invite Only (I may or may not be paraphrasing my thoughts to remove expletives there). And after reading the first batch of reviews I guessed correctly – already there are plenty of critics that seem to be uncomfortable, if not outright offended, by the material.

And that’s a pity, because while I can certainly understand why the game might offend, it has also got a genuinely entertaining and original combat system sitting underneath it and so is actually well worth playing for fans of the JRPG genre. It would be a pity for people to let some weird sex themes get in the way of enjoying that.

But first, let’s talk about that content. In Criminal Girls, you’re playing as some kind of guide that finds himself in hell, surrounded by attractive women who also all happen to be delinquents (yes, it’s a harem fantasy too). The goal of the game is to guide these lost souls through hell and help them deal with their demons and atone for their sins. If they’re able to do that they can be reincarnated as virtuous souls, so the stakes are pretty high. In concept, then, it’s a little like Dante’s Inferno in that it’s a morality journey through sin in order to understand how to live by virtue. It’s not heavy handed in its moralising, but in concept the game is looking to express a positive message or redemption. 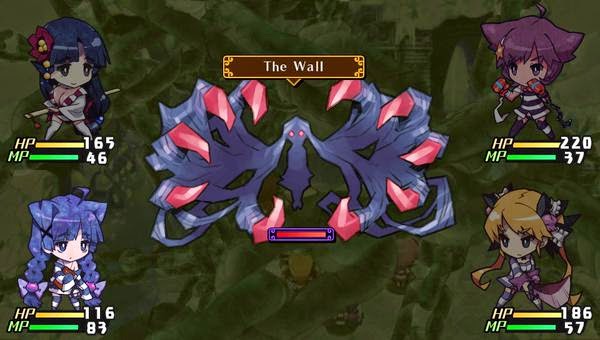 Where the game’s content will make some people uncomfortable is in the way that these girls learn new the vital skills they’ll need to use in battle in order to work their way through hell. At the start of the game, as with every other JRPG, the characters start with no skills. However, in Criminal Girls it’s not because they don’t know the powerful skills. Oh no, it’s because they refuse to use them in combat. Players need to “motivate” them into being willing to use these skills, and the are “motivated” through a minigame in which they’re exposed to S&M-style foreplay torture. And I mean that literally. In each minigame the girl will dress up in some kind of fetish gear (cosplay, gym uniform, swimsuit) and then you’ll subject them to a feather duster tickling, spanking, or electric shock. Do it enough to them and they’ll be “motivated” enough to learn a new skill.

These minigames are incredibly simple touch games that use either the front or the rear touchscreens on the Vita and you’ll need to rub, swipe, or tap-and-hold to remove coloured blobs called “temptations.” In the background, the girl poses in a provocative position for added fan service. For the western release of the game NISA has ever-so-slightly censored a couple of these poses (sticking a bit of fog on the image to conceal the, well, bits – the screenshot below is an example), but to be frank it’s not censorship worth getting upset over, as the game is more than explicit enough with it in there.

The minigame does support the thematic concept of the game, which is clearly designed to be a mix of parody and homage to the women in prison film genre. A sub-genre within the world of exploitation film, classic women in prison films, such as A Chinese Torture Chamber Story, Caged Heat, Chained Heat and Escape From Hell, are, well, controversial. I’m not going to enter into a complex debate to whether these films support or are subversive of a misogynist or sexist ideology – that’s for another day and a long, rambling opinion piece, but I think it’s important to note that it is a debate and there are arguments that support both perspectives (and, furthermore, feminist arguments that support both perspectives). As such I don’t think it’s reasonable to simply dismiss Criminal Girls for being a homage to the genre and the way it portrays the characters. 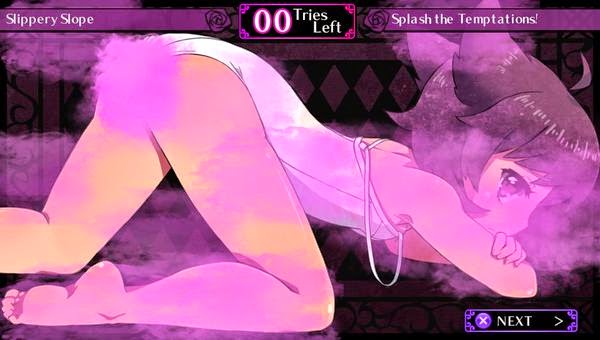 With that being said, Criminal Girls doesn’t offer the kind of writing or narrative context that would properly support the argument that it is subversive. Character motivation is weak at best, and very inconsistent – it’s not until the final act of the game that there’s any real attempt to represent them as anything other than standard JRPG character tropes. There are some attempts at humour and satire, and certainly the S&M minigame is exaggerated to and extreme enough point that it was clearly done for humour, rather than titillation, but nevertheless, the tone is too inconsistent to really make a message out of it.

Furthermore, the game lets itself down by straying from its thematic vision far too often for its own good. In the opening chapter of Criminal Girls, the characters all find themselves trapped in a cold, metallic prison. The background is covered with chains, and a dirge-like music track thuds along in the background angrily. In this place the degradation and humiliation of the girls makes thematic sense – this is hell, after all.

But soon enough you emerge from this prison environment, and the game settles in to standard JRPG environments. A lush, green environment, a fiery environment, a freezing cold one. The one that comes after that is interesting and back on theme (and I won’t spoil it, as it does come as a surprise), but never again does Criminal Girls recapture that aesthetic of degenerate perversity, and with that inconsistency it weakens its own themes. And that inconsistency concerns me a great deal more than the way Criminal Girls portrays its characters. There is nothing more indefensible than an inconsistent thematic tone, and if you’re going to target an edgy, even transgressive, theme, then remaining on message from start to finish is vital in accurately conveying that theme to the audience. 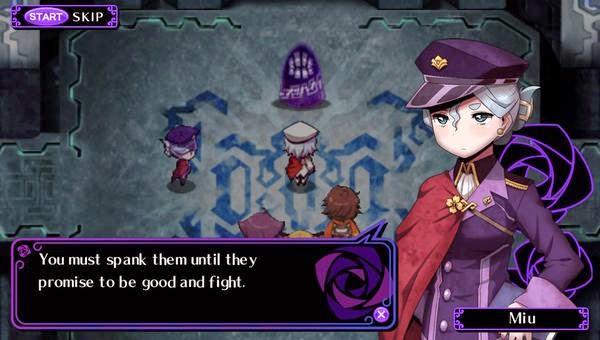 It’s a pity that the narrative is so flawed, because the core combat is worthy of attention. In most JRPGs you’ll select an attack or special ability for each character in the party, and they’ll dutifully follow these through. But in Criminal Girls, you don’t. At the start of each round of combat, the girl will tell you which attack she wants to perform. Some will be solo attacks, while others will be attacks that involve other girls in the party as well. Some cost magic points, and others don’t. What attacks the girls choose depend on what you’ve “motivated” them into learning. Then you pick one of the suggestions, and she will execute it (along with any allies that her attack includes).

With most JRPGs I find myself settling into a rhythm where I will use the same limited selection of attacks and special abilities that allow me to get through most encounters. The occasional enemy might have unique characteristics that make me change things up, but as much as I love the genre, for most games within it once I’ve figured out my optimal strategy I find myself grinding through the narrative. But with Criminal Girls you can’t do that, because the attacks that you’ll have to choose between changes with every turn. It really makes you optimise the way you use the party, rather than rely on a favourite single (or handful of) strategies.

Sadly, the game fails to properly capitalise on these mechanics. Perhaps because the developers were concerned that the random attack options would lead to situations where the player would have no way of coping with an enemy that required a specific strategy to overcome, there is not a single enemy in Criminal Girls that have defences that require specific strategies to overcome. The bosses generally have one really powerful attack, but it’s always projected with a “charging up” warning the turn before its executed, and you’ll know then that you’ll need to execute the defensive character’s group guard command for that turn. Otherwise, any combination of characters and skills will eventually beat even these creatures. There’s not much of a need to grind, either, as the encounter rate is quite high, so just wandering around is enough to keep up with the scaling of the enemies. 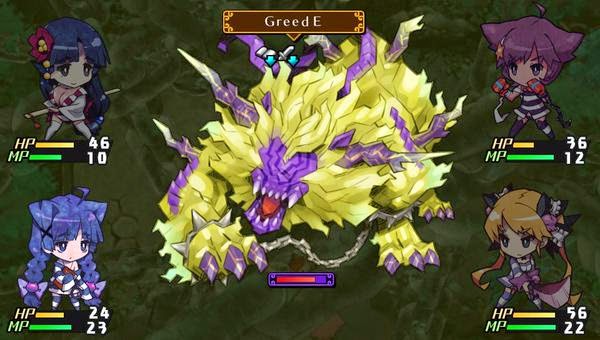 The dungeon crawling is actually quite good, with simple dungeon designs but the “to do” tasks within them make the most of the limited engine. There’s one exception though – there’s a sequence midway through that stops the random encounters entirely for a solid hour or so. This is done to enable some narrative exploration that requires the group of girls to be split up (and would therefore make random encounters far too difficult and distract away from the storytelling). With no real puzzles to work though this part of the game involves, literally, walking around a dungeon without any combat and reading dialogue, and as I’ve already outlined, the dialogue isn’t going to win awards. If it was dialogue of a standard such as Danganronpa’s then fine, you don’t need combat and can focus the player on the words, but for a game like Criminal Girls is was a mistake to take away the game’s strongest asset for any period of time.

I’d like to end on a real positive, though – Criminal Girls has stunning art direction. Moving through the dungeons is simple enough, and characters there are basic sprites, but in combat the enemy designs are refreshingly original, with sharp geometric designs creating something both abstract and wonderful. And, frankly, whether you find the half-naked girls in the minigame offensive or not, they’re certainly well drawn.

There was so much potential in Criminal Girls: Invite Only to be a transgressive, unique experience, but sadly, narrative missteps limit it from ever realising that potential. Instead what we have is a genuinely entertaining and original combat, and a minigame that, were Criminal Girls to be a higher profile release, would have been controversial indeed.

Interview: From EA and Second Life to uber-niche hardcore strategy