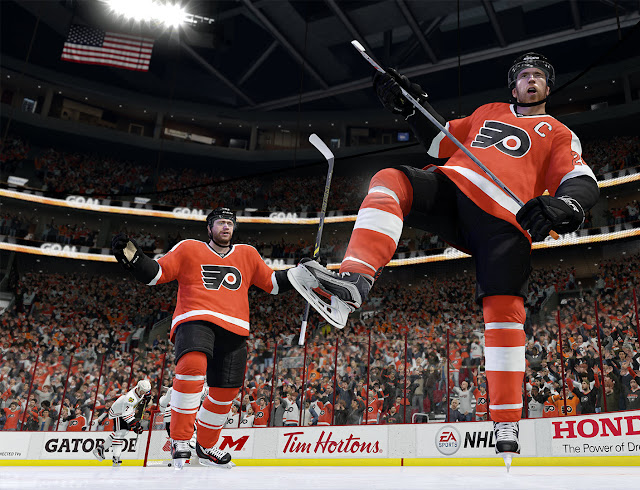 There is a lot for hockey fans to enjoy in NHL 17, because the on-ice action still delivers and there are enough modes to keep gamers coming back from more. That being said, the lack of changes from last year to this has given the game a somewhat stagnant sense of progress that nagged at me as I continued to play.

So, right out of the gates, I want to state that NHL 17 still makes a really solid impression. The visuals have a clean and crisp appeal to them with the player jerseys standing out starkly against the frozen white ice beneath the players. The outdoors look at the stadiums and the use of actual announcing announcers successfully drive home the presentation that makes you feel as though you are about to watch an actual hockey game. The atmosphere is there and the way NHL 17 rolls out by having you take over one of two teams with no real stakes on the line as a learning experience is a good introduction to what the game has to offer.

The overall engine was rebuilt a couple of years ago for the new generation of consoles. The idea was sound, but the series took some lumps that first year as NHL delivered some new physics and player models but somewhere along the way forgot to include many of the modes and features that hard core sports fans enjoyed most. Last year EA Sports managed to right the ship, making sure to include most if not all of the trimmings that people looked for from their hockey game.

The thing is, NHL 17 comes away like an updated and polished version of last year’s game, but without really adding a lot of actual meat to the experience. All of the modes I have come to expect from over the years are here. You have quick matches, the ability to play online with friends, a franchise mode, a create a player mode, the Ultimate Team (think of it as a card collecting game that they plays out on the ice) are all back and they work very well. Some new tweaks have been added with some more management details for those who like to manage budgets or relocate their teams. These small nuances are certainly nice but not for everyone.

The new Draft Championship mode is nice, as it is one of the modes I enjoyed with Madden in the past. Think of it as fantasy hockey where you get to choose from available players randomly selected for you. You pick the ones you think will best fill out your roster and while there is a lot of luck in it, there is plenty of strategy as well. The World Cup of Hockey is a nice new addition that is basically the same game, just with a different type of ‘season’ to it. Still, in the grand scheme of things these new additions and tweaks are not huge leaps and bounds ahead of what NHL had to offer last year.

There is a little more polish, with some extra features here and there, but at its core we have the same basic game, both for better and for worse. Luckily the ‘for better’ is still outstanding. The action on the ice is pretty intense, with the puck behaving so much more realistically now and it did several years ago. Player collisions are not as frequent as we see in more arcade style sports offerings, but they are still plenty intense. Make no mistake that NHL 17 is at its heart a sports simulation game. However, give credit where it is due: there are a ton of options and tweaks that can be played with to customise your gameplay experience. Want to use just face buttons to perform your various actions? You can. Want to use the right stick for more precise control? That is also an option. There is even a hybrid option (which happens to be my favourite) that lets you do bits of both. You can make the game a more arcade-like experience depending on which options you turn on or off, which allows you to tailor the experience to your tastes.

The visuals are generally great, but there are small things that show the engine’s age. After playing games like NBA 2K that generally (not always – let’s be real, there are plenty of player faces that get mangled along the way) does a great job of making faces of superstar players recognisable, it is disappointing at how far NHL has to go on that front. Also, after playing Madden this year with its ramped up commentary, I do wish that NHL would go the same route and provide an updated, more versatile audio experience. While the game announcing is generally good, it has not taken that next step towards accurately reflecting the game action as well as it should.

Thankfully one area where NHL 17 really shines is in all of the feedback it offers. The on-ice tutorials do a great job of indicating how it thinks you should play the game. Lines of sight, where passes will go – you can turn this in-game art off if you like, but this combined with coach ‘feedback’ between periods and at the end of the game really allow you to understand the sport and figure out how to play the game more effectively. A lot of sports games are very hard to just pick up and play if you are new to them, but NHL 17 deserves a lot of credit for being one of the easier ones to simply pick up and play due to its attention to detail on this front.

NHL 17 is a very good game of hockey that has not really grown much since last year. Tweaks and improvements are there, certainly nothing feels worse about the title than last season, but there is still room to innovate. The different modes gave me a ridiculous amount to do, but I think new players or those who have taken a couple of years off will get more out of this release than those who laced up their skates and played last season’s offering.