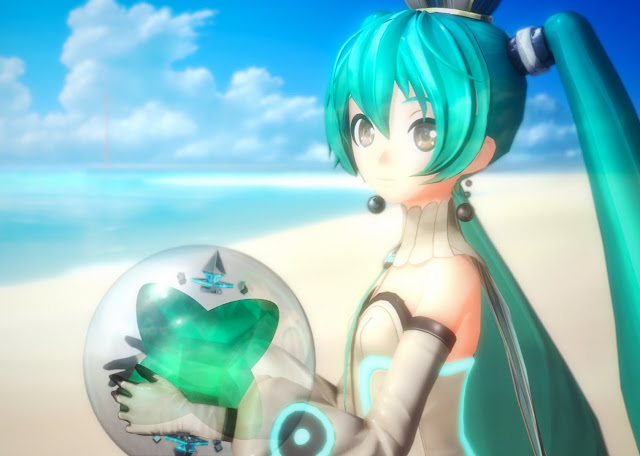 The latest Hatsune Miku game (in English) is just around the corner, and of course that’s cause to get genuinely excited. Miku’s games have a habit of combining a wonderful music track list with those endlessly endearing characters and superb art direction to make for something very addictive indeed.

And, while I’m not allowed to give away my review of Hatsune Miku: Project Diva X on the PlayStation 4 until embargo lifts, let’s just subtly point you to my massive import review of the Japanese PlayStation Vita version to give you a sense of what I think about this, shall we?

In celebration of Mikuhime’s impending invasion of the PlayStation 4s of anyone with taste, we’re splitting this week’s Friday Ten into two Friday Fives, and listing our top five songs from the game, as well as my favourite five costumes to dress Miku up in. And feel free to go berserk with the pictures, videos and whatever else you like in the comments, Let’s use this week to celebrate all things Miku!

First up I’m going to list my favourite five tracks from the game. Everyone has their own taste in music with Miku, of course, and just about every taste is catered for, because one of the beautiful things about Hatsune Miku is that it’s individual creators that decide what – and how – she’ll sing.

Because there are so many different artists working with Miku, SEGA has such an incredible range of musical styles to choose from for its games, and it does generally go for variety. For me personally I tend to prefer the rockier or more dance=like tracks, as you’ll see from my list below!


Anything from HoneyWorks is generally good stuff, but Raspberry * Monster has effectively been the song that SEGA has been using to show off Project Diva X, and with good reason. The light rocky attitude track has a strong, easy beat to get into a rhythm with, and so, as people were lining up to demo the game at last year’s Miku conference and Tokyo Game Show, this was a natural fit for giving people a feel for how the music and gameplay would interact.


This track is pure fun. SEGA generally likes to throw in at least one track that’s a light, themed jazz track into each of its Miku games, and this is that track this time around. Her voice is good for this kind of music – as many of us saw in the previous Hatsune Miku games with Close and Open, Demons and the Dead. Fans of that track will get a kick out of this one, and the way the fingers float across the buttons makes this one pure fun to play as well.


I really the skipping style in Brain Revolution Girl, because again, I think Hatsune Miku’s voice is well suited to the kind of staccato rhythms that form so much of this track. As a song it’s really slick and well produced too, because despite the staccato, the music is so slick and smooth that there’s a nice layering of tones effect going on. It helps that it’s one of the sexier dance routines too in the video clip, of course.


I didn’t much like Rin once. Then I discovered that if I gave her long hair, rather than her usual short hair, that I then like Rin. That’s neither here nor there, but the reason I bring it up is that even when I didn’t much like Rin, God I love this song. It’s a belter of a rock track and I am going to be severely disappointed if it’s not part of the playlist at the Hatsune Miku concert that I’m going to this year. It’s perfect for live music.


This is my favourite Miku song of all at the moment (it changes, but at the moment, I’ve got this one on repeat). It uses Miku’s “Dark” voice bank, which results in a smooth, smouldering, quite sexy voice when combined with the bass-heavy background track. It’s quite playful, too, especially with the charming choreography that was developed to accompany the track in the game.

And now for the top five costumes! I’m specifically picking costumes here that are not present in Hatsune Miku: Project Diva Future Tone, in order to highlight what Project Diva X does so well by itself.

Playing dressup is such an important part of the Miku games, which might sound strange, given that they’re rhythm games and what is going on in the background is irrelevant to the actual rhythm game action, but Miku is the drawcard to her games, so being able to play around with the visual side of the videoclips is a big drawcard. 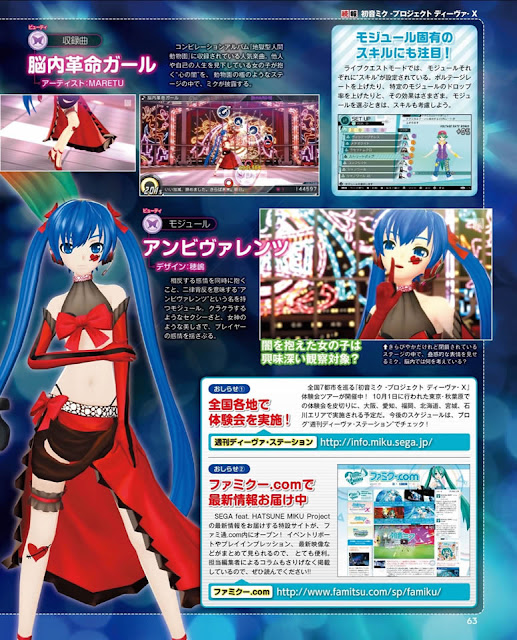 This is about as sexy as Miku costumes get. A rather small strap of material around her chest, held in place by a mesh cloth, and then accompanied with a short skirt and g-string underneath. I… like this one. It doesn’t match up well with every Miku track, because relatively few Miku tracks are of the kind of smouldering sensuality that this one demands, but it’s awesome when paired with something like Solitary Hide and Seek Envy. 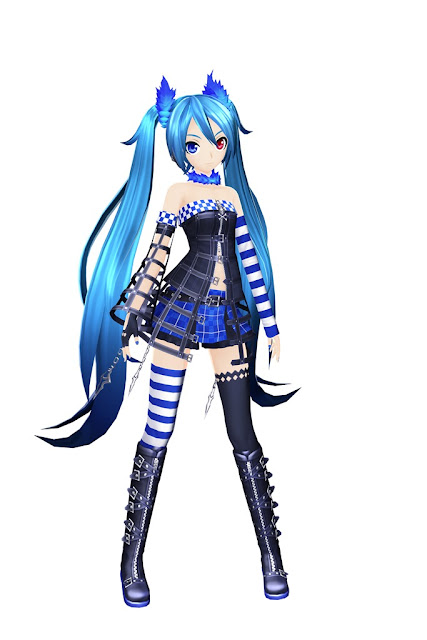 Occasionally I’m in the mood to give Miku a more punk or rock attitude. One of my favourite costumes of all actually gives her tattoos, which I find aesthetically stunning and striking, despite not being a fan of tattoos in real life. Rocking Stone is another costume in that vein, what with its punk colours and broken straps (I do like broken straps). Miku’s alternative coloured eyes with this costume are also mesmerising. 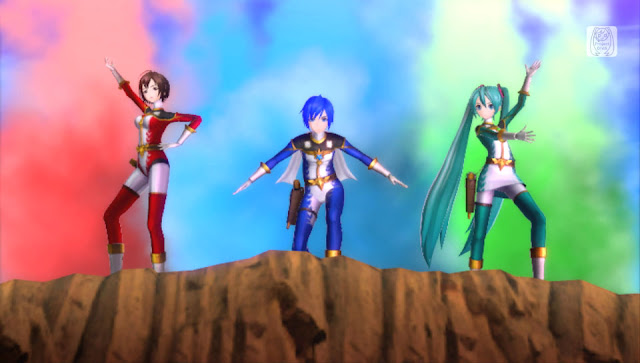 Miku as a Power Ranger! I laughed the first time I saw this costume in action. It’s so silly and yet so cool at the same time. The Crypton crew really work as Rangers, as there are six of them and each is associated with a different colour. It helps that Miku’s the Green Ranger, and as we all know the Green Ranger is always the best. 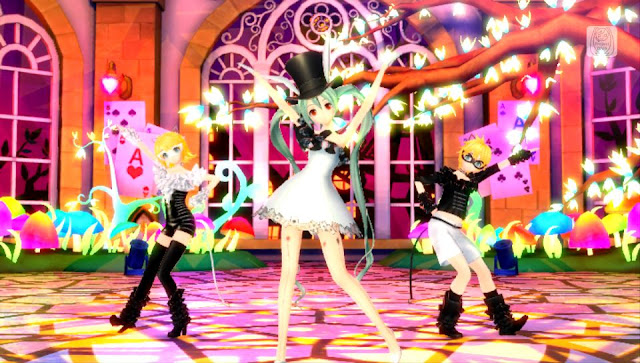 If you were to reach into a magic hat and pull Miku out of it (give me that hat), she might well be dressed like Ivy Rabbit. This costume is all kinds of cute, and while it might look like a dull, white, dress on the surface, when paired with the right music the charming innocence of it comes into its own. And, hey, let’s face it, Miku has great legs and this skirt is short enough to show them off in all their glory. 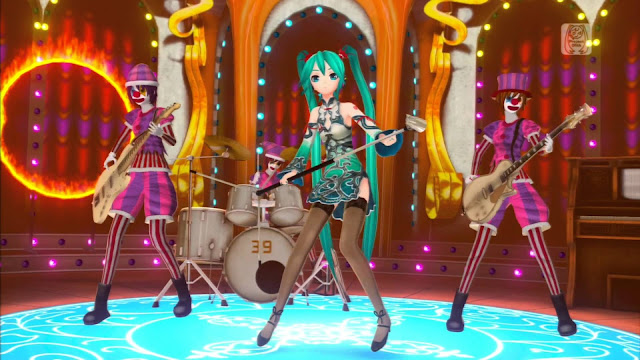 Despite being one of Miku’s oldest costumes, and in previous Project Diva titles, it was not in Project Diva: Future Tone, and I really don’t understand why. Miku’s traditional Chinese dress is a gorgeous, glamorous design, and incredibly popular among fans, so I can only assume that the developers either forgot to put it in entirely (unlikely), or were concerned that there were too many music video clips in in Future Tone’s playlist that, if Miku were dressed in this, would result in her flashing her underwear too often. This costume does have a habit of being revealing like that if Miku needs to crouch or sit down during a performance, but thankfully in Miku Diva X the clips are choreographed in such a way that this is far (far) less frequent, so we can just enjoy the dress for the rich colours and shape it allows.

One of the best Aussie games is console-bound!