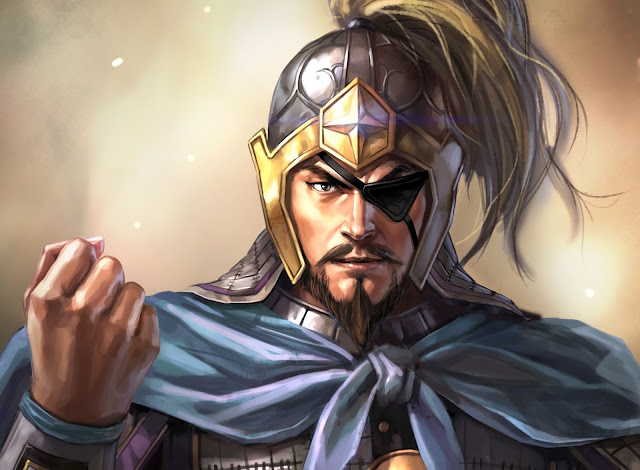 A couple of years ago I had all but given up on playing newer editions of Koei Tecmo’s serious strategy games. Both the Nobunaga’s Ambition and Romance of the Three Kingdoms franchises, which have been around for almost as long as games have been, stopped being localised around the time of the PlayStation 2, and as someone who loved those games back on the old consoles, this was distressing.

Related reading: Nick’s review of the other hardcore strategy game that Koei Tecmo has released on PlayStation 4: Nobunaga’s Ambition: Sphere of Influence.

Then, out of the blue, Koei Tecmo took a chance with Nobunaga’s Ambition: Sphere of Influence, on the PlayStation 4. It must have been enough of a success, because now the publisher is back with the thematically-similar Romance of the Three Kingdoms. The game plays differently in some ways, and is set in a different location, but otherwise, people who got along with the last title should find a whole lot to appreciate about this one.

Nobunaga’s Ambition is set during Japan’s medieval Sengoku era. Romance of the Three Kingdoms is set well before that, and over in China. Based on one of the greatest works of historical fiction ever written (also titled Romance of the Three Kingdoms), RotTK is based on an era of history that has absolutely captivated people for hundreds of years, despite the specifics of the era having been largely lost… when a book of historical fiction is the bulk of what you have to go on, you’re in a bit of trouble in trying to piece together fantasy from fact. 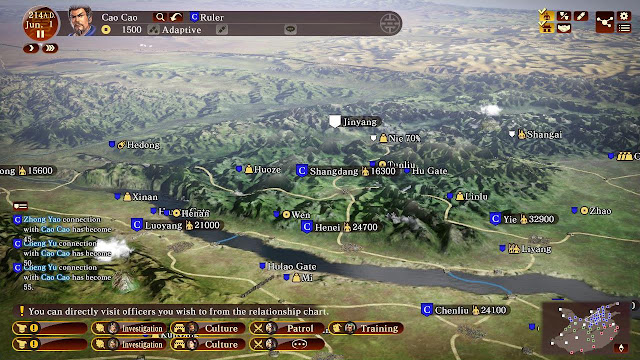 What we do know, however, was that this was a chaotic period that makes Brexit look like a utopic vision of calm political debate. It started when a hugely corrupt government (the Han) had, over decades of hubris, had the legitimacy of its rule eroded to the point where a populist leader was able to mobilise a small army and openly rebel against the establishment. Honestly, with thousands of years of proof against letting this happen, you would think that politicians wouldn’t keep doing the same things, but no. This Yellow Turban rebellion, led by Donald Trump… sorry, Zhang Jue, was bad news for China, so a couple of rising stars came together to put them down. Those stars were Cao Cao, Liu Bei, and Sun Jian (who would die soon enough, and after his first son was assassinated, the second, Sun Quan, became the third in this happy little trio).

They did the right thing, and Trump, sorry, Zhang Jue, was crushed, but in the power vacuum a nasty fellow called Dong Zhuo took power. Cao Cao, who was rapidly turning out to be the era’s Napoleon, managed to manipulate basically everyone in opposing Zhuo and ends up fracturing China to the point where he was able to take a bunch of territories. But not the lands Sun Quan, and Liu Bei. Oh no. Those two managed to carve out empires of their own… and I’m sure you can figure out where this is going. A three way hate triangle kept boarders relatively stable and population numbers down through endless fighting for a while… but good things need to come to an end, and the three kingdoms are eventually replaced when one family, the Jin, is able to march into battle fresh and take everything over.

Obviously I’m overly simplifying a ridiculously long book there, but the point is that RotTK has a lot of material to tap into, and is popular with armchair historians and companies like Koei Tecmo that like to make games with lots of heroes beating up on one another. It’s popular because you’ve got some incredible personalities, such as the ruthlessly sexy Cao Cao, the intelligently sexy advisor to Liu Bei, Zhuge Liang, and the feral-but-oh-so-awesome Incredible Hulk… I mean Lu Bu. Through this era there were numerous battles where some incredible (for the time) military tactics won the day, such as we saw in the battle of Chibi. And there was a lot of political intrigue to enjoy too. Women weren’t exactly battlefield combatants for the most pack back then, but woo boy was Sun Shangxiang a fiery soul, and let’s not forget how Diaochan was able to seduce Lu Bu. Sexy stuff. 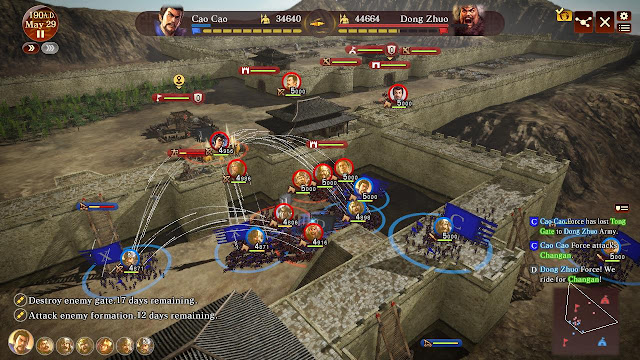 The rich history of the time lends itself well to the Dynasty Warriors action games, but equally it lends itself to serious strategy gaming, which is where RotTK comes in. Through much of the era, no one “side” had an overwhelming position of strength. Where Ghenghis Khan was able to roll over everyone that got in his way, the generals of the Three Kingdoms era were balancing their strategies on a knife edge, knowing that the moment they allow a battle with one kingdom to weaken then, the other kingdom will simply march on in to claim what was left.

In game, this translates to a slow paced RTS – think more like Europa Universalis than Starcraft. You’ll be wading through dozens of menus that help you develop up your towns, recruit military forces, conduct diplomacy or sabotage against your rivals, or, at times, go to war. As with most really serious strategy games, the initial few hours can be utterly overwhelming if you jump right into the deep end, and while it’s possible to pause the flow of the game to issue orders and commands, the initial going will feel sluggish and generally unenjoyable, as you carefully read through every option and weigh one against the other in trying to figure out what the right move is next.

Nobunaga’s Ambition really liked throwing you in the deep end (and without a life jacket, at that), but one of the really nice touches about RotTK is that it has an immensely comprehensive tutorial that acts as a story mode. Sandwiched between gorgeous drawn art cut scenes are missions that take you through the entire RotTK timeline, and introduces commands one at a time as you play along. The grand strategy and 4X strategy genres are not known for their quality tutorials, mostly owing to the fact that back in the early days, these games came with manuals that were over a hundred pages long. It’s difficult to do an engaging tutorial that can cover of that much detail. Koei Tecmo has achieved something truly rare here; a tutorial to a grand strategy game that people with limited strategy game experience will still be able to get along with, but at the same time it’s something that experienced strategy fans will also still enjoy playing through. 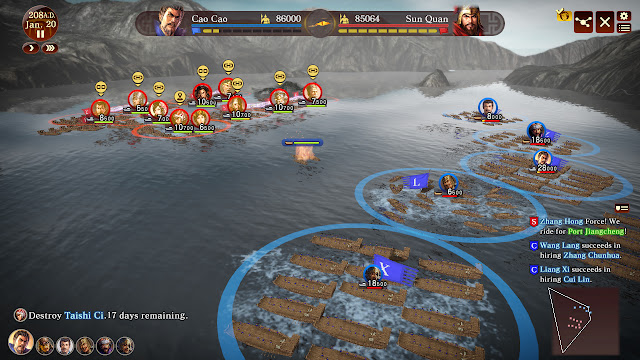 The tutorial also does a good job of contextualising the events and history for people who are less familiar with RotTK, which is useful, because once in the game proper, scenarios don’t do much with the history of the time, so can feel a little cold and dry to people who aren’t already familiar with the background. Again the tutorial comes to the rescue though, because after playing through the tutorial you’re much more likely to have favourite warlords, and this will help make the scenarios more personable and engaging.

Related reading: To check out what the series used to look like, check out the SNES Romance of the Three Kingdoms, available on the Wii U Virtual Console.

The game itself is broken up in two fragments, and the two pieces are not unlike what you see in a Total War game, though the weighting is different. There’s far (far) more focus put into the management of the realm in RotTK than in Total War. Conversely, there’s less emphasis on the on-field battling. Constructing military units is only a fraction of the job, and you’ll be spending more time commanding vassals around, engaging in debating or military duels with rivals, building up your town’s economy, and recruiting new leaders under your banner.

The other piece of the puzzle is the combat itself. When opposing enemies bump into one another on the map, they duke it out, with each general taking command of a unit, and these are commanded in RTS fashion, with a keen eye for unit movement (i.e. bonuses for flanking enemy units already in combat), and the ability for leaders to spur their follower to superhuman feats. 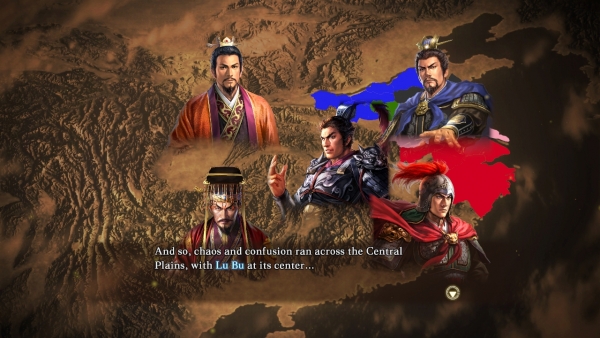 The combat mode is also completely pauseable, so there’s plenty of room to take things easy and figure out tactics. The range of units are relatively limited, but the point of this game wasn’t about big, complex battles featuring hundreds of units. San Tzu’s classic military truism is that “every battle is won before it’s ever fought,” and that’s the case here, too. Your success in battle has little to do with commanding units around the field, but rather making sure they’re simply more ready, in larger numbers (and it is hard to turn around a win from smaller forces without some serious terrain support) and better trained.

So minor is the focus on the combat that it’s even possible to allow the AI to automatically generate battle results if you can’t be bothered playing them through. I’m the sort who does play almost every battle – more because I like the view from the battlefield than anything else – but that skip option is nice when the result is overwhelming from the start, and I’m focused on something more important elsewhere, so the battle is more time-wasting diversion than anything else. In these circumstances, the game’s engine does do a good job in automatically assigning casualties and the like.

Beautiful vistas are hardly necessary when playing strategy games, and most developers do indeed strive for simple, elegant interfaces that allow players to focus on the actual strategy. Romance of the Three Kingdoms is technically quite simple, but aesthetically it offers a truly beautiful map of China. Scrolling over mountains and then viewing a lens flare from a city next to a sparkling river is immersive stuff. In battle, you can zoom the camera in close enough to get a good view of the chaos of melee. So, simple as it is, Koei Tecmo has done a good job of setting a scene, and with this genre, that’s ultimately all you’re looking for. 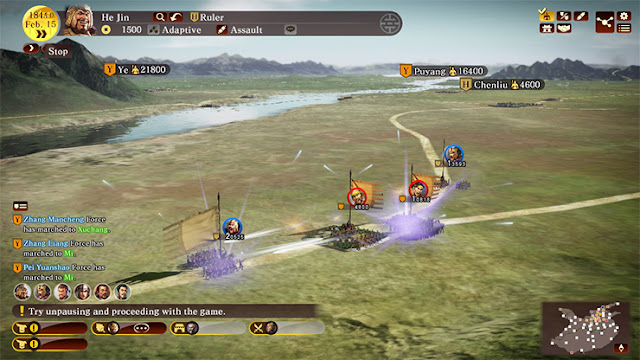 Related reading: This game is also being released on PC. Mind you, the challenge there is that it’s up against Europa Universalis IV itself. Matt’s full review.

It’s so good to see these kinds of serious strategy games on console, as it’s something that has been all-but exclusive to PC over the past couple of generations of hardware. With a comprehensive tutorial system, Romance of the Three Kingdoms is the best fit game for people new to the genre to wrap their minds around it. Equally, for more experienced strategy fans, the superb balance that made the historical events the game is based on so fascinating also make for the near-perfect strategy game.

On the social, cultural, and moral implications of Augmented Reality (AR)