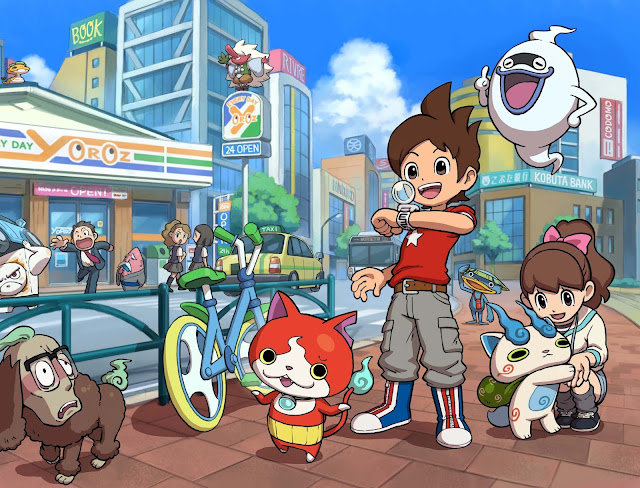 Time to be really controversial here: I prefer Yo-Kai Watch to Pokemon. There, I said it. That’s not to suggest that I don’t like Pokemon, because I absolutely to, but Yo-Kai Watch has is far more in tune with the kind of Japanese culture and humour that I find appealing.

Yo-Kai Watch is weird, see. For those that don’t know, yokai are ghost/ spirit things that, when compared to oni (demons) are less hostile and malevolent. They’re not exactly nice, but they’re less likely to try and kill you on sight. They’ve become a favoured topic of Japanese anime and games as folklore-like beings, and Yo-Kai Watch is part of that tradition.

This series has an overwhelming surreal edge to it, though. One of my favourite boss battles of all time comes in a hot spring in the first game, where you run into an obese monster thing that refuses to let you get in the hot spring. So you battle him. And in the background there are old dudes wearing nothing by towels, doing a really weird dance to the battle music.

As I said, surreal stuff. But, set against the backdrop of normal suburban life as it is, Yo-Kai Watch’s greatest strength is simple; it’s nostalgia for the kind of games we used to play as kids where we would imagine that we were on big adventures, as we explored our local playground.

I was unsure how the first game would actually sell in the west, because it is so incredibly Japanese that I wondered whether western kids would “get” it, but it looks like enough of them have, as Nintendo is localising the second Yo-Kai Watch. As you can see from the trailer, it’s every bit as weird as the first, and that’s a good thing.

This is yet another 3DS JRPG to keep a very close eye on.

I suspect we will not be getting Genkai Tokki: Seven Pirates in the west