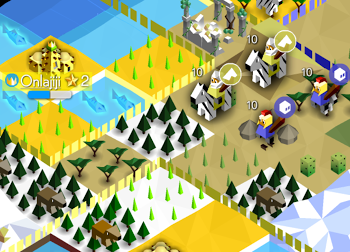 So here’s an addictive little iPhone game for you. If you were to bring the art aesthetic and focus on simplicity of a game like Crossy Road, and have it meet a 4X strategy game like Civilization half way, you have SuperTribes. And as odd as that that particular marriage might sound, the offspring that it produced is truly divine stuff.

SuperTribes is a 4X game that has been streamlined beyond what you ever thought a 4X game could be streamlined to. You’ll start each game selecting a nation, and that will give you one city, one unit, and a couple of resources to start the dream of world conquest with. And then you need to use that unit to explore the world, found new cities (by converting villages around the place to your side), and investing resources in improving cities (so they produce more resources) or science (to unlock better units and so on).

You’re not alone in this particular story of exploration, however. Playing alongside you are a number of other tribes who are also busily expanding. When you encounter them they will be at first friendly, but after a while they will start attacking you with their units in the hope of adding your cities to their empires. So the natural solution is to fight them back. Unlike “proper” 4X games there is absolutely no diplomacy involved in SuperTribes, but that’s by design because otherwise tapping through menus would have wasted time when really all the game’s design wants you to do is race through turns as fast as possible. 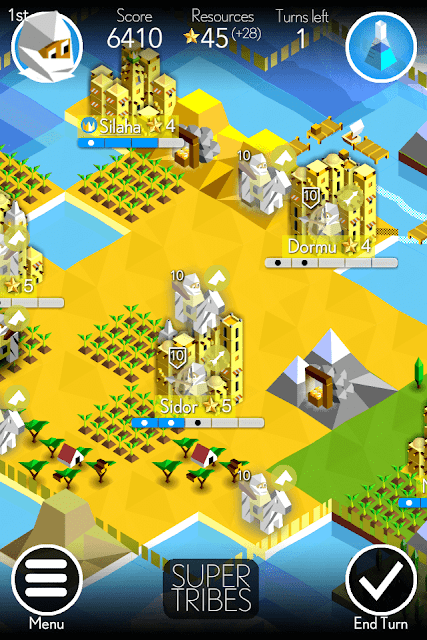 Each game has a time limit (30 turns), and each turn is over in a minute or two – I think the longest game I’ve had so far ran for around 90 minutes. There’s no way to tweak this turn limit, and that’s with good reason: the core challenge in SuperTribes is in getting high scores. Almost every action you take has some kind of reward in terms of points, and obviously the more onerous tasks reward more points. Growing a city to become enormous, or building a major wonder building both offer a lot of points, but so two do building roads, defeating enemies, and researching science achievements. It’s not a good idea to ignore any of these, as the most successful nations grow consistently across their empires and still maintain the necessary resources to build an army and attack enemies. The strategy involved in building up big scores is a lot of fun, and a good reason to keep coming back to the game to try and improve your position on the leaderboard.

Supporting the simple, charming gameplay is simple, charming visuals. There are a number of different tribes to play as, and each tribe has its own unique special bonus (such as starting a game with a scientific discovery that the others do not have). Each of these tribes is represented with a different set of character models and city designs, but each unit looks bright and happy as it bounds around the place.

SuperTribes is also supported by one of the most aggressively generous monetisation models I’ve ever come across. The base download allows you to play the full game, without restrictions, for a full four of the five tribes. The fifth tribe is a $2 unlock, and that’s the only payment SuperTribes will ask you for. 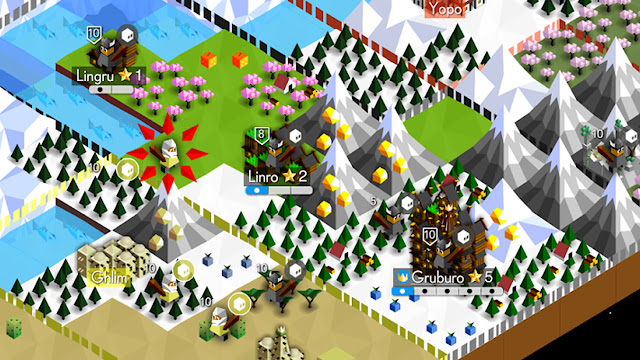 You could argue that the unlockable tribe has a fairly early advantage thanks to a free, valuable scientific advancement that they start with, but it’s not the end of the word if you don’t opt to make this purchase; you’re still getting access to an obscene amount of content.

I assume – and indeed hope – that the developer of SuperTribes has plans to release more tribes to unlock, because the game deserves better financial support than I’m able to give it. I’ve already played dozen games of it, as it’s a perfect way to kick back with during a particularly dull meeting. Because there are so few turns per game, every five minutes that you spend with it feels productive (certainly more so than most of the meetings that I attend), and because I know there’s not a huge time commitment to each game I rarely think twice about booting it up while at home with an hour to kill, were I carefully plan the times I’ll be able to commit to a 50-hour JRPG. Ironically that means I’ve played SuperTribes more over the last couple of weeks than any other individual game.

There are, of course, certain downsides to the experience being so very simple. Scoring high requires you adhere quite strictly to some basic strategies and unlock paths through the tech tree. Because there’s only a half dozen or so units, the military strategy side of things is also very, very simple. Given that one of the points of a strategy game is to encourage strategic thinking, SuperTribes doesn’t always gel well with its own genre as a result. 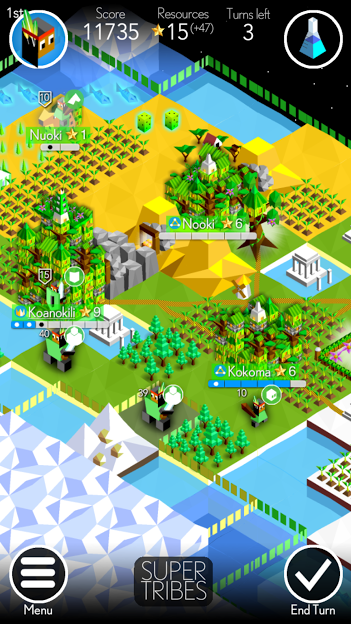 But then it’s comfortable with being an addictive little Crossy-Road-meets-Civilization mobile game, and, frankly, I’m comfortable with it being that too. SuperTribes will probably not reach the dizzying heights of the most viral of mobile games, because it has a touch more depth of gameplay to it than those titles. For that same reason, though, it’s the kind of mobile game that can still appeal to the most hardened of hardcore game fans. So, just as the majority of people would be more than happy sticking to XCOM and never needing to delve into Europa Universalis, the majority would be more than happy sticking to their Crossy Roads. But that doesn’t invalidate Europa Universalis’ existence, and it certainly doesn’t invalidate SuperTribes as a game.