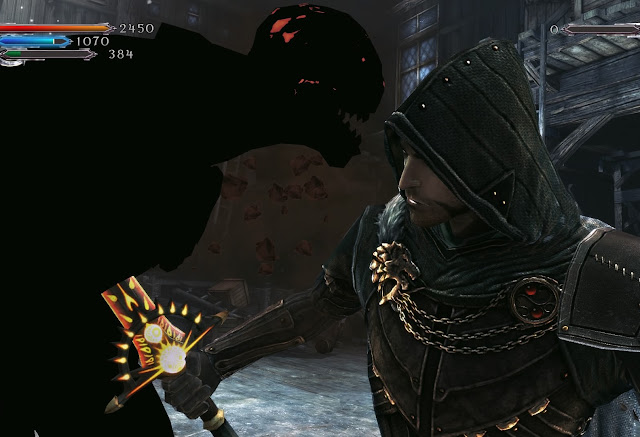 I was not the biggest fan of Joe Dever’s Lone Wolf when it originally landed on the iPad back in 2013. As I was playing it, I was constantly reminded that the game was messing with my nostalgia for the classic gamebooks that I would play over and over again, and some presentational issues were the real icing on my cake of irritation.

Related reading: My review of the original release of the game on iOS.

Thankfully, on the PlayStation 4, Lone Wolf really comes into its own. Ironically a digital gamebook, which you would think is a natural fit for the iPad, but too reading-heavy for a home console, is actually at its best on Sony’s machine.

Anyone who has ever played a gamebook before will be aware of what happens – you roll up a character, using a basic RPG structure that will give you a set of skills and combat abilities. There’s no right or wrong option, and every skill and ability is useful at some point, but you’re not going to have access to them all in a single play through. Then you get stuck into the reading, which is periodically broken up with moments where you can choose a direction to take next, or fight a battle against enemies.

Anyone remember gamebooks? Those choose-your-own-adventure books with RPG-like mechanics? Well, just landed on the PS4…
Posted by Digitally Downloaded on Sunday, 20 March 2016

The writing is strong, as you would hope for a gamebook where you’ll be doing a lot of it. It kicks off with your hero, the titular Lone Wolf, investigating a village in the frozen north that has come under attack by this work’s equivalent to orcs or goblins. As he explores, he has the opportunity to help the few surviving villagers, turn the table on the orc-things, and eventually, take the fight directly to their leadership. It’s very pulpy, and Joe Dever’s work was always heavily set in the world of B-grade swords-and-sorcery, but I can’t emphasise this enough; it is a lot of fun. Dever’s particular strength as a writer was being able to set scenes with a minimum number of words (important for keeping the pace of a gamebook going), while providing just enough sketching to the scene for the imagination to run wild.

The development team have done a good job in capturing the essence of Dever’s style. There are animated illustrations that are absolutely gorgeous to behold, and the inventory and mapping system, which occupies half the screen (the other half being the text and illustrations itself), are detailed and visually vibrant. Though you might still initially balk at the idea of reading a book on your PlayStation 4, it doesn’t take long to settle into a fairly gripping talk, and become lost in the raw quality of the aesthetics. Or, to put it another way, this game looks like it belongs in the same digital library as the likes of Hand of Fate and Armello; digital editions of classic games that we got lost within back in the day, being brought to life in a way that’s only possible through video games.

One area where the game really breaks from the Joe Dever novels is in the RPG-like combat system. When battle is joined the game shifts to a 3D, turn-based combat system which plays very much like the ATB system of Final Fantasy games after 4. Players wait for a little energy bar to fill up before selecting from a range of strategic attacks and defensive moves. Some attacks will weaken enemy armour, for example. Others will deal a lot of damage. Some rely on you having throwing knives available, while others draw on special magical reserves. You’re able to make multiple attacks on your turn, depending on how much stamina remains, and it’s a good idea to leave just enough stamina at the end of the string of attacks to enter into a blocking stance, because enemy attacks can be brutal in return. 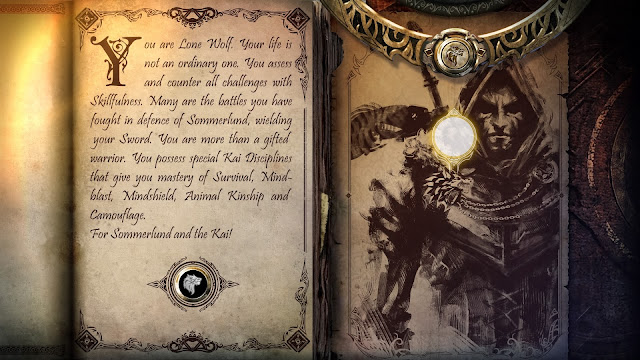 I did not enjoy this system much on the iPad, for a number of reasons. Firstly, it breaks completely with the Joe Dever combat system, and thus messed with the nostalgic rush that I was getting in playing the game on my iPad. I’ve got to say that this combat system “fits” much better on the PlayStation 4. When you’re going in to a console game you’re expecting bells and whistles, even for board games or gamebooks, and this combat system provides that. So, while I’m still not certain the system fits with Joe Dever’s own vision, I’m more comfortable witnessing it on my console screen.

The loading times are much faster on console than I experienced on iPad, addressing another major technical issue I had with it on the iPad. Most importantly of all, the quick time actions that frustrated me on iPad feel much better when mapped to a physical controller. Every attack and defensive move you’ll do in Lone Wolf is accompanied by a single quick time motion, which will either add damage to one of your own strikes, or allow you to take less damage from an enemy attack. On the PlayStation 4 controller they’re easy enough to pull off that, as long as you’re paying attention, you’ll be able to execute each time without stressing over it, so they quickly fade into the background and simply become another interactive element as past of the combat system. This completely resolves the clunkiness that I struggled with on the iPad release.

The iPad version of the game was delivered in chapters, and it must be said that those chapters were really quite short – short enough that I never really felt like I was getting value from them. The PlayStation 4 release collects all those chapters into one, and now it’s a full fledged game, with as much raw content as you would expect from an indie RPG. 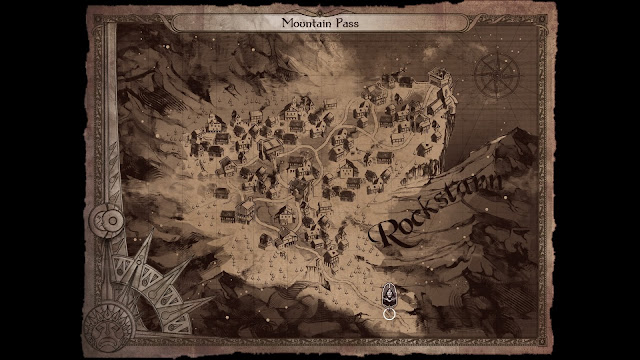 Related reading: All of our gamebook coverage.

So don’t let the idea of reading a book on your PlayStation 4 put you off; Joe Dever’s Lone Wolf is good stuff. Coupling a downbeat, grim pulp fantasy narrative with enough alternative routes that you’ll want to play this a couple of times, and throwing in a combat system that fits on the PlayStation 4 like the most comfortable glove you’ve ever owned, Lone Wolf finds itself comfortably at home on console, and this more than makes up for my disappointment with the iPad original release.

Digitally Downloaded podcast: It’s all about the narrative!