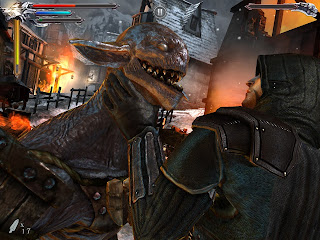 Of all the nostalgic trips I’ve have on my iPad, Lone Wolf could have been the mightiest of all. As a kid I bought, read and reread Joe Dever’s fantasy choose-your-own-adventure games more than anything else I read, I suspect. As Fighting Fantasy was proving to be the most popular gamebook series in the mainstream, it was Lone Wolf that was occupying my time.

I have no idea why the developers of this game decided to take the gamebook format and turn it into a quick time-heavy pseudo RPG, but it doesn’t work. I didn’t enjoy Lone Wolf on the iPad at all.

It started off nicely. The presentation was strong, and I created myself a character, picked his specialities (being able to talk to animals and stealthy for the win), and started reading. The text is nice and crisp, as you’d hope for a book, but most impressive was the artwork, which was slickly drawn, and makes effective use of limited animation to give the experience more vibrancy than would be possible through static images in a conventional book. 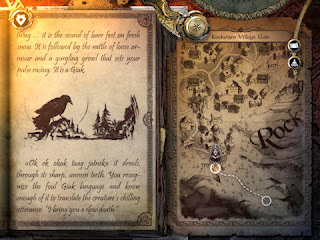 There’s even an interactive map in this game that allows players to travel around more conveniently and adds a basic RPG structure to the overall mix. If only the combat wasn’t so terrible.

When combat happens a (too slow) loading screen takes players to a 3D battlefield which runs in the same kind of pseudo turn-based fashion of most Final Fantasy games. A little bar fills up and when it does players can unleash a range of different attacks. Some consume resources, others are purely physical. Then the enemy will attack back.

Not only is this structure very different to the Lone Wolf combat system I remember as a child (and thus messing my nostalgia up completely), but it’s not that interesting. Every action comes with a quick time action in order to do additional damage or defend more effectively. Because the combat runs quickly everything becomes messy busywork quickly, and shortly after that, irritating. 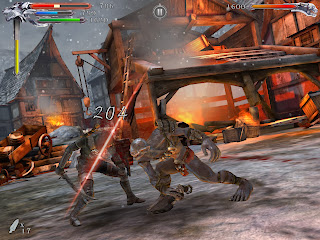 These combats look nice enough with interesting (albeit generic) monster designs and environments, but that loading time that I mentioned earlier is way too long for a game that I ultimately just want to pick up and play. Tin Man Games’ gamebooks all seem to understand that with the transitions into and out of combat being very elegant, even if they’re not as visually spectacular as in this game. But Tin Man Games’ gamebooks are all the more playable for that decision.

Another scratch against the user interface is the fact that if you want to do your reading on the iPad in portrait mode (as books should be), the combat still happens in landscape. It breaks the immersion within the game when you’re constantly being reminded to flip the orientation of the device that you’re holding.

Beneath all of that is a narrative that still holds up today, in the same juvenile pulp fantasy kind of manner as the Fighting Fantasy books. We’re not talking about anything memorable, but Lone Wolf is the right kind of page turner to while away a Sunday afternoon with a beer or ten. Which is fine, but any digital gamebook that makes me wish I still had the physical books around is a failed game.

Xbox One is live in Australia, and we have the photos to prove it