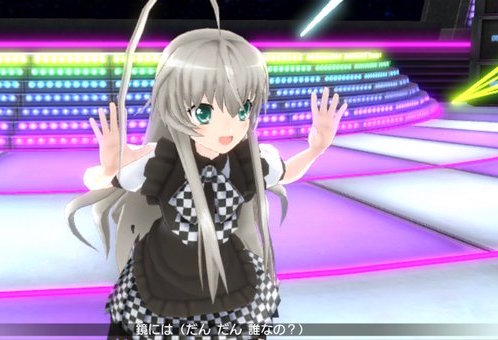 Miracle Girls Festival really wants to make you hate your favourite kawaii anime. Pulling together the adorable girls from 11 different popular anime, including Vividred Operation, Nyaruko: Crawling With Love, Wake up, Girls! and YuruYuri, and sticking them on a stage so they can perform the various music tracks from their shows via a Hatsune Miku-like rhythm game, is a genuinely inspired idea.

If this game is of interest, you can grab it from Play-Asia here!

And just like the Miku games, Miracle Girls is a bright, and downright obscenely happy game. While I’ve been playing this, my wife has asked me a couple of times what is so funny, because it keeps sticking a big, stupid grin on my face. So why do I say that it wants to make you hate your favourite anime? It’s got nothing to do with the presentation or design… it’s just that the raw difficulty of this one is ridiculous. It’s legitimately sadistic. If Miku games are the Dark Souls of rhythm, Miracle Girls Festival is… well, there’s just no comparison. And I play rhythm games obsessively. I can only imagine how infuriating this is going to be to people that don’t think entire weekends playing rhythm games is a good way to recover from the week.

The basics of the game first; it’s a Miku Project Diva clone through and through that uses the exact same mechanics and exact same engine to power it. As a video clip of the girls on stage plays in the background, players need to tap the Vita’s face buttons in time with the music. Do that well enough through the course of the track and you’ll score well. Build up a lot of well timed presses in a row to get a ‘combo’ going and really score highly. It’s a pretty demanding and unforgiving system, however, because being even slightly out on any single button press will break the combo and you’ll lose a lot of potential points. 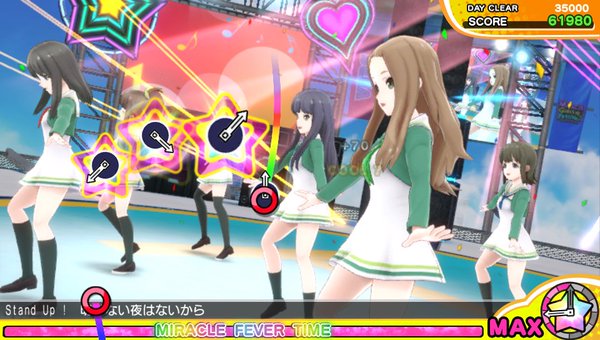 To briefly continue the comparison to the Miku Project Diva games; firstly, what’s going on in the background is nowhere near as distracting as it is in the Miku games. This might be because the relatively flat stage environments don’t have the same highly-produced vibrant “music video clip” aesthetic that we see in the Miku titles, making it relatively easy to zone what’s going on onstage out and focus on the icons. Or it could just be me; it could be that as cute as Nyaruko or the Vividred girls are, they’re not as intensely… distracting… as Hatsune Miku is. Yes, ‘distracting’ is the right word for it. Whatever the actual case, I found concentrating on the game far easier this time around.

But Magical Girls is brutal to the more OCD side of me in such a way that makes Miku’s genuinely difficult games seem like a walk in the park. I can get perfects, on Extreme (the most difficult challenge level), in the Miku Diva titles. That’s no mean feat, of course, and my play time counter of around 800 hours or so attests to how much work I put in to get to that point. But I’m there now and it’s glorious. With Miracle Girls, I’ve yet to perfect a single track on Normal difficulty, much less the difficultly levels above it. I’m only a dozen or so hours into this one, admittedly, but because the gameplay systems are exactly the same, my experience with the Miku games should have helped me with this one, and it’s just not doing that.

Part of the uplift in challenge can be attributed to there being SO MANY ICONS to press. On hard difficulty most tracks involve upwards of 1000 button presses across a song that might last three or so minutes. That’s an awful lot of buttons to press with razor-sharp precision, where even one single one that’s out of time will invalidate any chance of getting a ‘perfect.’ The game still tries to make you feel good by telling you how excellent you are for getting over 90 per cent, but nevertheless, the very definition of frustrating is to miss out on a perfect thanks to one or two wayward button presses in a thousand. 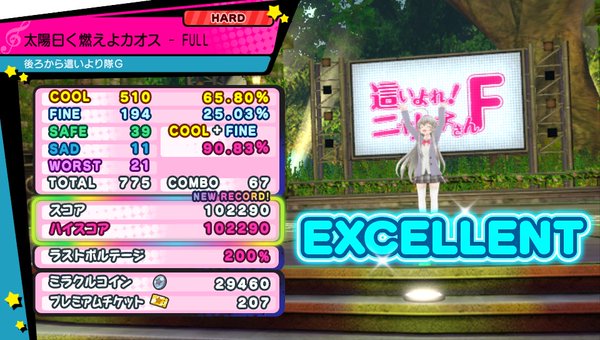 Of course, Miracle Girls doesn’t actually mandate that you get perfects on tracks. That would be cruel beyond measure. This one comes with a story mode (which isn’t essential to follow if you can’t read Japanese, but certainly provides a point of difference to the Miku games), and you’ll cruise through that if you can maintain 80 per cent “good” or “excellent” presses through the tracks. The story mode simply involves completing a handful of music tracks, one after another, and then making sure the total score of those tracks is above a minimum. It’s a nice way to give greater context to what is going on than simply aiming for perfect scores, as Miku games task you.

The girls in the game only perform their own music; so Nyaruko won’t be seen on stage when Vividred is performing. This is both a blessing and a curse. On the one hand, because there are so many different anime represented in the game, the variety in music in Miracle Girls is really quite impressive. On the other, the range of music for each individual anime is quite small. So, if you’re a general fan of anime music, you’re going to have a better time of it than if you’re coming in specifically as a Nyaruko fan. Then again, just having that interstellar horror in a game at all is awesome.

Outside of the rhythm action, there’s some alternative costumes to buy for the characters using cash acquired in-game, though the range of costumes for each individual character is, again, limited. As someone who enjoyed playing virtual dolls with Hatsune Miku and dressing her up in odd combinations of costumes, this is a feature solely missing. However, one bonus mode is a really nice touch. Tapping into the other hobbies that fans of these kinds of anime are likely to have, Miracle Girls includes a gatcha (lucky dip) system with digital figurines as prizes. You can then use the in-game currency to buy a range of different backgrounds, and then stick the figurines in these scenes, like you might create real dioramas for your figurines in the real world. Most of Miracle Girls’ target audience are likely into figurine collection, so adding this feature in was a clever way to give players a sense of progress and reward for their work. 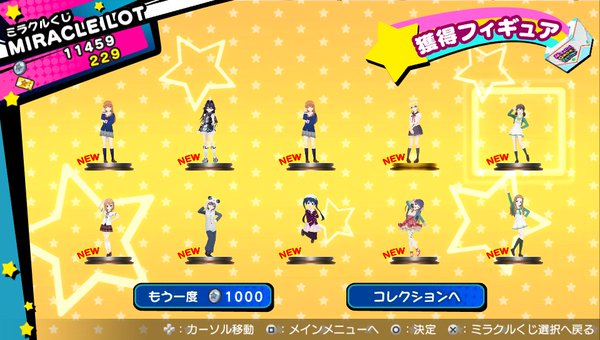 Oddly enough, for a game that literally exists for the purpose of fan service, the actual fan service of Miracle Girls is kept right down. As with the Hatsune Miku games, there’s no way to tilt the camera low enough so as to compromise a character’s dignity. Which is odd, because, just as in the Miku games when the actual game clips have an excuse to, the developer has no problem using that same angle. There’s nothing that’s offensive (as I said, this is a ridiculously happy game), it’s just something that’s noteworthy; SEGA really does seem to think it is the only one that gets to play fan service with its games.

The PlayStation has no shortage of quality rhythm games, but if you can get past the sheer learning curve, Miracle Girls is one of the best. It’s import friendly, with no need to understand Japanese to be able to work through the core material, and the music, drawn from so many popular anime as it is, is incredibly addictive, foot-tapping stuff. Given we’ll not likely see this get and English release, there’s really no reason not to import, rhythm fans!

If this game sounds like fun to you, grab it from Play-Asia. By ordering through this link, you’ll be supporting DDNet through our affiliation with Play-Asia.
Share this