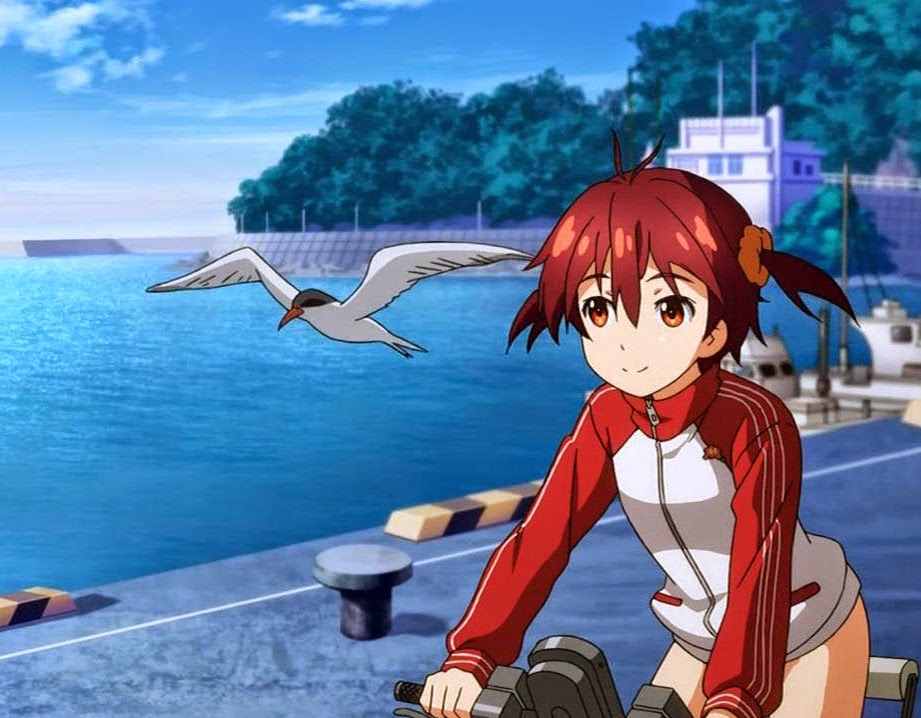 Vividred Operation has a different tone to most anime that feature robot things fighting big monsters. This is undeniably an action fantasy anime, but it’s also one that has an ultimate message of peace and harmony.

In other words, beating the big bad bosses isn’t the narrative goal of this series. Rather, it’s a return to order that this story craves. Coupled with the coming of age theme that runs as a sub-plot, and Vividred Operation is oddly sweet, charming, and innocent.

Akane Isshiki is the 14 year-old granddaughter of scientific genius, Kenjirō Isshiki, and they live on an island that is notable for Manifestation Engine – a machine that Kenjirō helped design. This Engine is crucial to humanity because it is a green and peaceful power solution that can sustain the world’s entire needs. 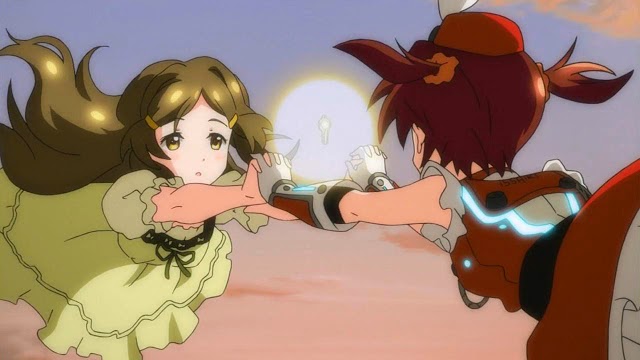 And so Akane, her sister, and grandfather live in peace in a peaceful corner of the world. The girls go to school, and live a completely innocent life. Then the alien, mechanical Alone attack, drawn to the power of the engine. The military is completely ineffective, but Akane discovers she has a special power that allows her to transform into a powerful robot girl, and combat the Alone.

But that’s not all. Akane’s friends start to discover they have powers of their own. Eventually a small team of young teen super soldiers forms, and then the narrative starts in full.

The central thematic hook to this thematic power is that the girls’ strongest power comes from their friendship – if Akane kisses one of the other girls on the forehead, they somehow “combine” into a super soldier. There’s an utter faith in the unfailing strength of friendship implicit in this story, that unbreakable bonds of friendship can be relied on to overcome any threat, and for an action-heavy show, it’s quite charming. 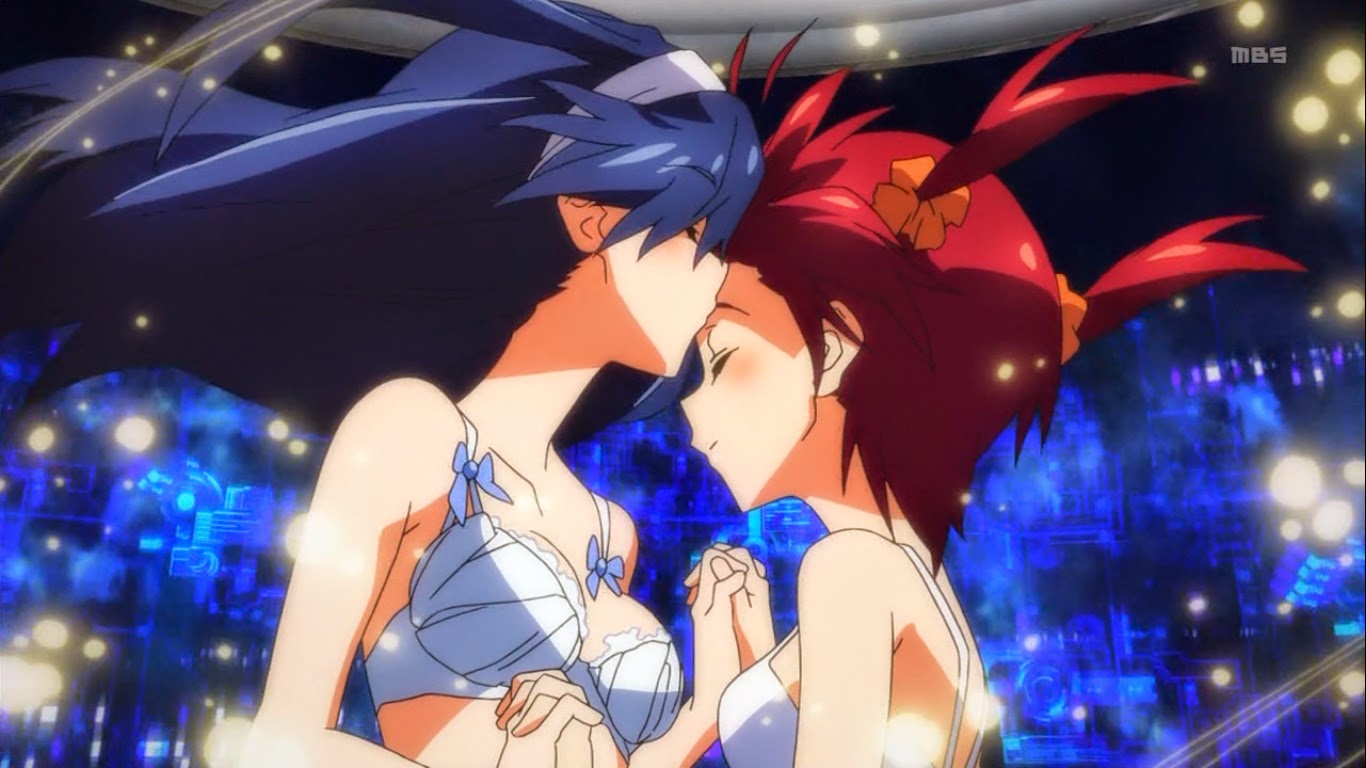 I would have assumed from this concept that show itself is aimed at young females, but it doesn’t take long for that illusion to be shattered. Oh no. This anime has its fair share of fan service. When the girls transform into their “robot” forms for the first time we get to watch a sequence where they’re stripped to their underwear before putting on their superhero costumes. In day-to-day life the camera has an odd obsession with low angles. I’ll leave you to figure out what you see in these frames.

In theory I think these sequences are an attempt at metaphor; to visually represent the maturing in the girls; the transformations from innocent schoolgirl to powerful robot the visual metaphor for coming of age. But it all feels far too gratuitous for its own good.

Still, we’re not talking about to the extent of what we saw in Aesthetica, and aside from the uncommon moments of fan service, Vividred Operation is a sweet and charming little anime. Akane is an especially effective character, possessed of both a strong and responsible personality mixed in with some very innocent personality quirks. “My mum and dad always told me to look after others,” she’ll say in one scene. In the next she’ll be singing nonsense rhymes as she runs her errands on her bike. 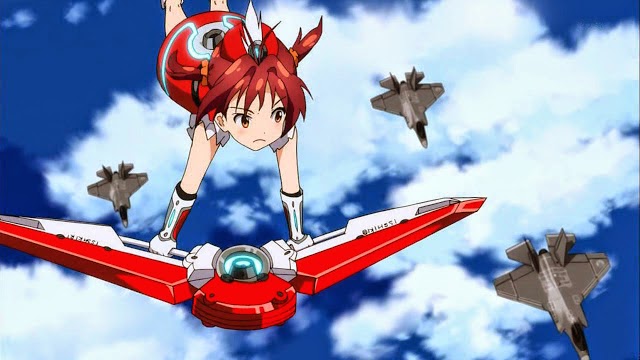 What I found most interesting is that the plot is told through the eyes of girls, and so a full 90 per cent of the anime is occupied with a carefree spirit. Do the girls fight horrible monsters? Sure. But most of the time it feels more like play than the threat to the world that it is.

But the other 10 per cent of the show shows snippets of what happens in the background; the world’s adults, engaged in very serious work that the girls are largely naive of. It’s fascinating to watch these two settings contrast with one another.

Vividred Operation is nothing if not energetic. The characters are bright and, for the most, incredibly happy. The plot bubbles along, touching on a few serious themes, but generally burying them right under the surface. For the most part, this is a show about friends and friendships, and it’s quite sweet.

This anime is available at Madman Australia

Last chance to register your score in the DDNet Mario Golf championship!