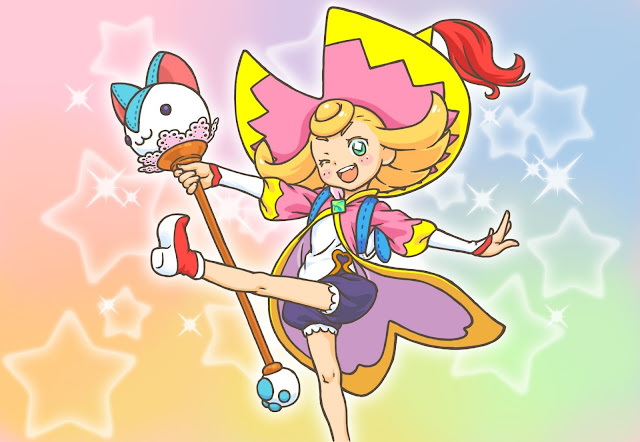 There are plenty of games out there that share the defining mechanics Pokémon has perfected over the years; collecting, training, and battling monsters. With the likes of Yo-Kai Watch putting a uniquely Japanese spin on the little JRPG subgenre, Moco Moco Friends feels like the logical extension of that motif (albeit, a niche one for western markets). Its “magical girl” theme governs all facets of the game design from narrative through to presentation and proves that a change of theme and pace can uplift fairly standard execution elsewhere.

Related reading: Yo-Kai Watch is the other current competitor to the Pokemon throne. Matt’s full review of the first game to be localised into English here.

As the protagonist of a magical girl game, the eponymous Moco, looks the part with her classical pink witch outfit. Her characterisation takes pages out of Sailor Moon’s book with her naïve, trusting nature but trades Usagi’s crybaby tendencies for a downright infectious level of optimism. She’s even decked out with a cat wand appropriately named Neko, who plays the equivalent role of Kero from Cardcaptor Sakura as the heroine’s snide but caring companion.

The dynamic between them results in some wonderfully cheeky script writing that is a definite highlight of the entire experience. Moco’s blindly cheerful disposition works brilliantly when juxtaposed against the judgmental Neko and her mentor. Although the cast is reasonably small, even side characters such as a giant blue dog manage to breathe life into exposition-heavy sequences with gags about doggy hair loss from vigorous petting. As the genre is wont to do, this pleasantly light-hearted fluff winds up being the ambassador of a greater a coming of age story centred on Moco’s growth (which does justify her stereotypically ditzy behaviour a tad). As a side note, I have to give props to Aksys Games for providing a localisation that, although designed for the kids, acknowledges the otaku appeal this game has by respecting the original character names working in clever nods youngsters will likely scratch their heads at. 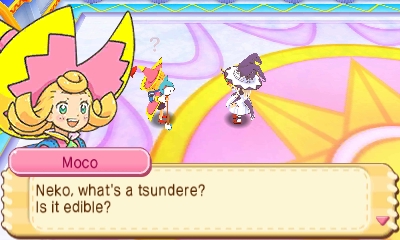 As for the breed of creature game tasks players with collecting, that would be Plushkins; cutesy animals with inexplicably aggressive tendencies that professional witches such as Moco must rescue from negativity. Whenever there’s a lecture on how Plushkins and witches operate, there’s an underlying sense of mystery to keep players engaged. This is no Madoka Magica, to be sure, but unearthing and analysing the more disquieting undertones to this game’s jolly world should provide older players ample reasoning to press forward.
And that’s a good thing because the RPG elements might not pull that off on their own merits. As far as actual mechanics go, Moco Moco won’t be rivalling the aforementioned Yo-Kai Watch or Pokémon as its gameplay lacks the same depth, scope, and polish offered by either title. Although Moco Moco’s world is a heavily stylish wonderland conceptually and based on the musings of NPCs, there aren’t particularly memorable locales since the traversable world is almost nonexistent. Not every JRPG needs a bustling overworld, but I do believe greater exploration would have enhanced the atmosphere the game tries to achieve and, by extension, the effectiveness of its narrative.
The lack of excitement on the overworld front would be negligible if dungeons were able to create the sense of wonder that punctuates the magical girl theme, but that’s sadly not the case. Said dungeons play out similarly to roguelikes… if those commonly featured seatbelts, training wheels and parental supervision, that is. The vast majority of them are hyper-speed affairs with a handful of floors sprawling a fraction of the estate you’d expect. Things do eventually pick up towards the game’s climax, but by then it’s too little too late. Streamlining a potentially treacherous pastime for a youth audience is one thing, but I suspect any child that can fully parse the script will hunger for a more satisfying meal. 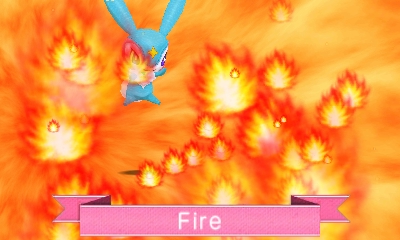 I will give Moco Moco Friends credit for providing a coherent approach to item crafting. As someone who tends to dodge said mechanic in RPGs as much as humanly possible, its systems are reasonably deep and well-explained. You might not need to use them a whole lot, but they’re certainly accessible and worth tinkering with.
Finding and battling the cutest Plushkin within each dungeon is infinitely more entertaining than enhancing your trinkets, however. The name “Plushkin” speaks volumes about the inherent cuteness of the race, but it’s worth noting that the many varieties of them are reasonably well thought out takes on mythology and the like. The worst that can be said is that you’ll wish they were all unique; some monster designs are slapdash re-colours with different types assigned to them.
Plushkin skirmishes are typically three on three affairs remarkably similar to Pokémon’s triple battles in that you’re commanding your pals in turn-based style, taking advantage of your opponent’s type weaknesses, and picking attacks based on how many opponents you can strike at once. You’ll even have opportunities to evolve your adorable animals and teach them more potent attacks as you go. Although it’s easy enough to progress the story by mashing attacks willy nilly or through the handy auto-fight command, the battles are high-octane and oozing excitement. Expect them to go down with children splendidly. 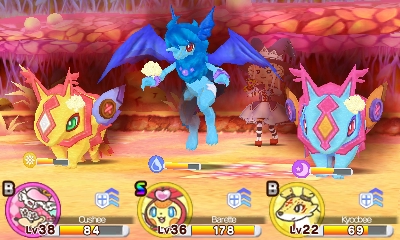 As a whole, the game features immaculate presentation and boisterous colour schemes that make each dungeon feel like an adventure of its own. Heck, every last menu reeks an aura of extravagance through choice colour palettes and dazzling patterns that sometimes border on kaleidoscopic. Perhaps that’s why Moco Moco Friends is able to remain entertaining for the entirety of its campaign despite its many technical shortcomings.
Related reading: To get into the most recent of the actual Pokemon series, Clark’s review of Omega Ruby and Alpha Sapphire is a good place to start.
Moco Moco Friends is geared firmly toward young children, but the magical girl aesthetics and witty script allow it to transcend an otherwise middling JRPG. It wouldn’t have hurt to take a couple more cues from the collect-and-battle RPG greats and, with a sequel, Moco Moco Friends could be elevated substantially. As is, there’s something to be said for the pure, clean fun Moco delivers in spades.

You can grab this from Amazon here:
Share this