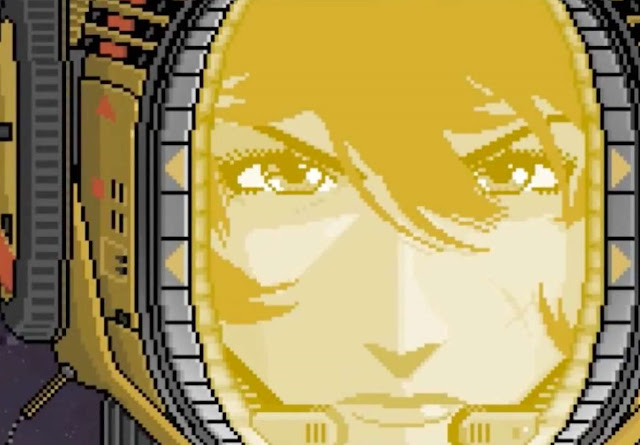 Stardust Vanguards is another entry into the recent deluge of local multiplayer games that try to capture the retro-style couch fun nostalgia. Games such as Towerfall Ascension and now this focus closely on pixel graphics, catchy music and some fast and furious multiplayer action. Stardust Vanguards manages to check all of these boxes, but still comes up a short unless you fall into a very specific audience.

There is almost no value to this game except in the specific circumstances that you’ve got a bunch of people together on a couch to play with. These days, I find myself taking games to task for leaving out local multiplayer in favour of online only modes, but Stardust Vanguards suffers the same problem flipped on its head. It offers a handful of fun and engaging modes if you have someone to play with on your PlayStation 4, but the title’s longevity would have greatly benefited from online multiplayer.

The premise is pretty thin, as you assume the role of one of four Mighty Morphine Power Ra-okay, well, one of four differently coloured soldiers in space armour. With about a dozen different battlefields that play out on a single still screen and a few different modes (Deathmatch, Team Battles, King of the Hill/Conquest and Capture the Flag/Space Ball), there are also numerous options for building your own preferred battles. These little tweaks are actually a good deal of fun should you be playing with three or four friends, because they give you control over all sorts of different switches such as weapons you can use and enemy parameters. 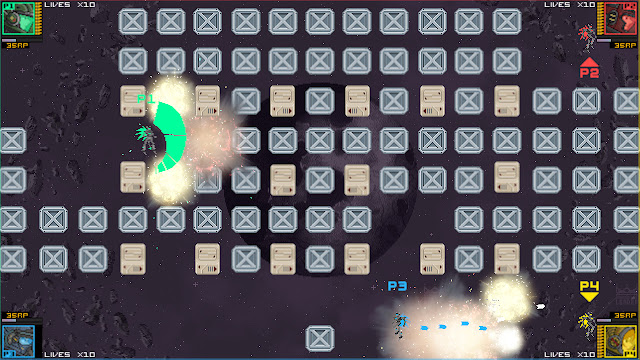 The gameplay itself is simple but effective as you have a gun with limited ammunition, a sword that can be used for powerful melee attacks (and can even deflect bullets back at enemies) and the ability to call in AI reinforcements when you build up enough action points to do so. The more basic modes deal with waves of enemies coming at you, and this is the only real single player mode of the game. You pick a new location, fighting off nine waves of bad guys/pirates that come in from the edges of the screen. There are different difficulty levels, and beating the nine waves unlocks the next one in the list.

The first couple of levels are wide open, while later ones have more obstacles that get in the way of movement and bullets. However, by and large these levels all play out in similar fashion. Your enemies will spawn near the edges of the screen and slowly drift towards you, firing round and round of bullets. You can duck behind structures to obscure those bullets or swing your sword at them to deflect them. You might shoot at some with your gun while trying to sneak up on the bad guys and finish them off with your sword. Seldom are you going to be able to beat them with only your ammunition, on account on how limited it is as a resource. Of course, shooting from a distance is safer, as it requires less precise timing than swinging your laser sword.

You can play through this wave mode with friends, and boy it is a whole lot easier on the later stages/higher levels of difficulty. Going it alone eventually means you get cornered and overwhelmed. However, to get the most out of the experience, you really have to be playing against your pals. Deflecting a shot with your sword and causing it to kill your opponent with their own bullet is a lot more fun when you get to taunt the person. There are competitive and cooperative modes, depending on your preferences. 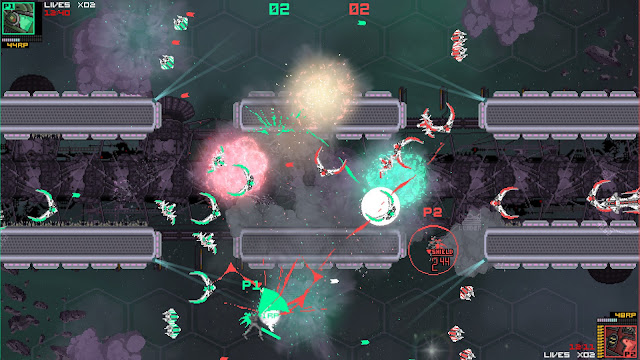 The music is catchy enough, and the retro graphics are more or less what you would expect from an indie team making this kind of game. They are clean, bright against the black/dark backdrop and everything moves smoothly. The lack of slowdown is probably the best part about the visuals, because it leaves the player with no excuses – it’s just about skill and precision timing at that point. However, this is by no means what I would consider a pretty game, it’s not a technical marvel by any means and after a fairly short time, the lack of visual variety means that you have seen just about everything there is to be seen.

But the game’s real killer is just how limited that content is. I certainly understand where the developer is coming from with its focus on local couch multiplayer, and I am glad to see smaller titles like this coming out into the marketplace. But even then, there is not a lot of levels or modes to keep you coming back for more, and the game simply lacks the replay value that makes something like Towerfall so endlessly replayable.

There is plenty of fun to be had here with friends, but just make sure your expectations are in line with what you will be getting here. It is fun for a while, and well made for what it is, but for a game that relies so intensely on the multiplayer action, it’s just not quite up there with the best in the genre.