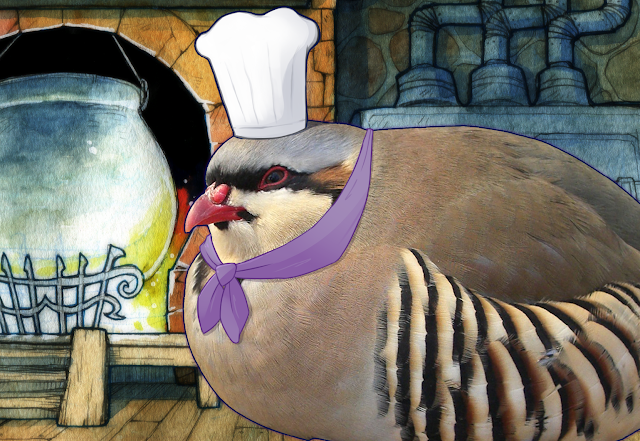 When I played Hatoful Boyfriend last year, I didn’t really expect to get attached to the characters because it was marketed as a light hearted visual novel. But it wasn’t that at all. Hatful Boyfriend dealt with dark themes and emotions once you got past the initial silliness and delved into the “true” narrative path and end. The sequel, Holiday Star, is a new game set in the same world in which the events of that true ending do not take place.

Related reading: You can check out Matt’s review of the original game here.

Hatoful Boyfriend: Holiday Star does a great job of reminding me why I enjoyed the original so much and introducing a few new characters and giving others more back story. As a visual novel, Holiday Star’s main story is split up into four chapters. Each of these chapters varies in length and I managed completing the main story in around eight hours going through every ending, which is not bad for a visual novel.

In the game, you’re still playing as a human, Hiyoko Tosaka, who is at St. Pigeonation’s Institute; a school designed to bring people and birds together into a harmonious community. While the story is not of the same quality as the true ending route of the original, I enjoyed it a lot as a fan of the original. There is light hearted, comedic moments, but at the same time, there is also that dark edge that made the original game such a delightful surprise. There are also some nice references to other games and franchises (notably for me, Ace Attorney) thrown in as well. But for the darker edge it sometimes takes, one of the things I enjoyed most about Hatoful Boyfriend Holiday Star is how little the game takes itself seriously even in those moments. 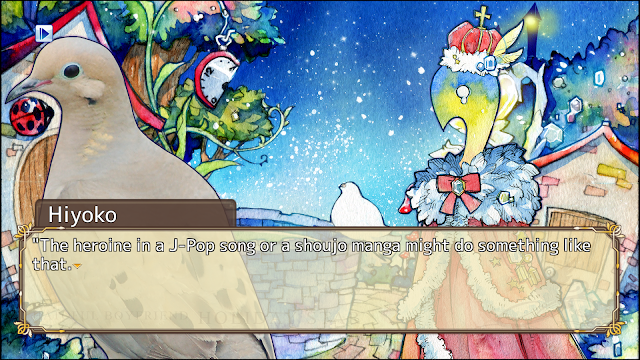 The content does not end there though. Beyond the game you’ll also unlock six short stories and have access to six radio episodes as well. The radio episodes deal with questions and answers for characters giving you more back story and I’d recommend this after completing the main story. The short stories are fairly long as well and to go through, and it’s impressive that these “extras” come in to about half the total content offered in the main game.

For all its sense of fun, Holiday Star is also fairly linear for a visual novel and this is quite disappointing coming from the original. One of my other big complaints with it is the lack of background music during many scenes. Hatoful Boyfriend is not voiced and the character music or background music in scenes play an important job in developing the characters personalities as a result. There are many sections in Holiday Star with absolutely no audio at all. I’m not sure if this is a bug or intentional but I do not like it at all. There’s also a bug I ran into where the screen goes blank whenever I got a Steam alert. This second bug was present in the original as well and it baffles me that it has made its way to the sequel. I hope MediaTonic patches out the music issues and the bugs because this series deserves better than to be criticised for something so fixable.

The visuals are great across the board with beautiful hand painted visuals in some of the scenes. Without spoiling the story locations, it really feels like the production values for the art have gone up here. Barring the issue I had with the music or lack thereof, hearing Christmassy tunes with everybirdie was great. 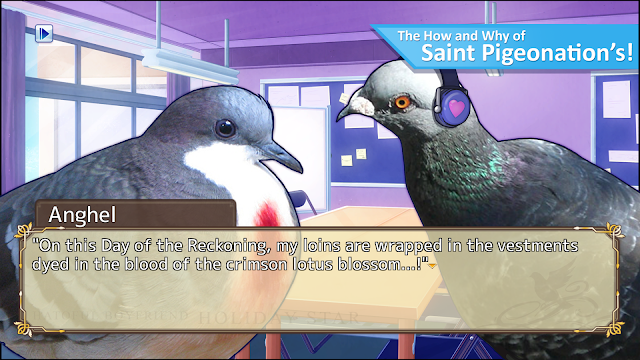 Related reading: And if you’d like to take a crack at making your own visual novel, then you should consider picking up Tyranobuilder. Matt’s review here.

Overall I enjoyed Hatoful Boyfriend Holiday Star as a fan of the original. It was great getting more back story for several characters that were underdone in the original, as well as meeting new characters all in the holiday mood.

The key games of January 2016: Forget catching up on that backlog