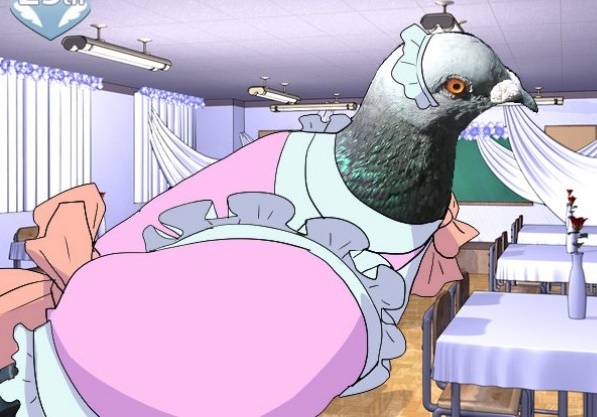 Hatoful Boyfriend is a visual novel/ dating game where you play as a human girl who goes to a school for the gifted. Gifted birds. Literally. Your classmates are pigeons and doves, and your job is to say the right things so that your chosen birdie falls in love with you. Otherwise the game ends suddenly with your character’s death.

The truth is that I’m not even sure I can write any more about the game than that. It’s as completely balls insane as it sounds. This isn’t a Kafka-style story. It’s not Metamorphosis-like with humans becoming animals to make some grand, twisted, point about humanity. It’s not meant to be taken seriously, other than perhaps as a complete tear down of every cliche that has ever been thrown into a visual novel or dating game. I mean, if you go to work on Monday, and your co-workers asked you what you did over the weekend, and you said “Hatoful Boyfriend” and then described the game to them, you’d probably lose the job. Or at least they’d stick you in the corner far out of sight of anyone normal (it was okay for me, my collection of Miku toys already had me in that corner…).

Complete insanity inside, though, no game has quite managed to make me proverbially (and in one or two cases literally) shoot my drink out my nose. Every second line of Hatoful Boyfrind is weird humour in its most pure form, or some kind of devastating teardown of the aforementioned cliches. Take, for example, the inevitable pool scene. Now we know that in visual novels and dating games that the pool scene means only one thing – hot bodies in swimwear. It’s totally exploitative. But let’s see how Hatoful Boyfriend handles this: 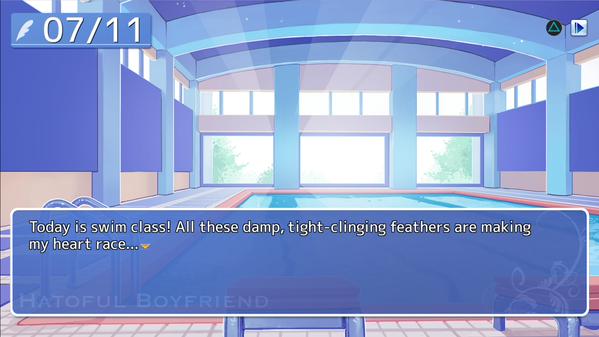 Brilliant. You can almost hear the development team high fiving one another for the takedown through the thick haze of whatever the hell they were smoking to come up with this game.

Mind you, the humour isn’t always fingers poking fun at the genre. Let’s go through just a fraction of some of the other examples of humour that Hatoful Boyfrind pulls off with style. 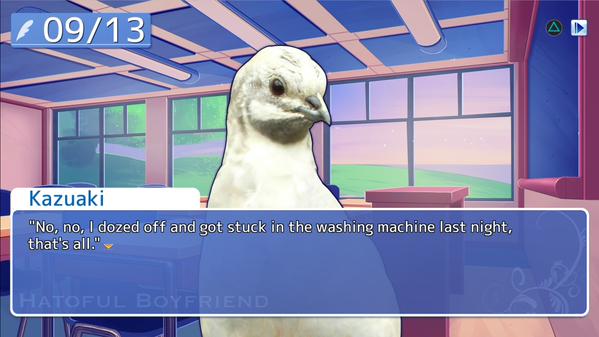 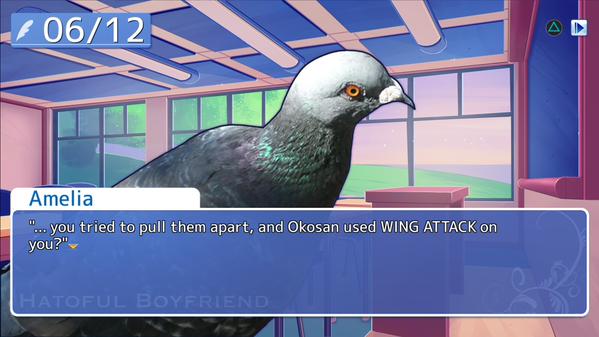 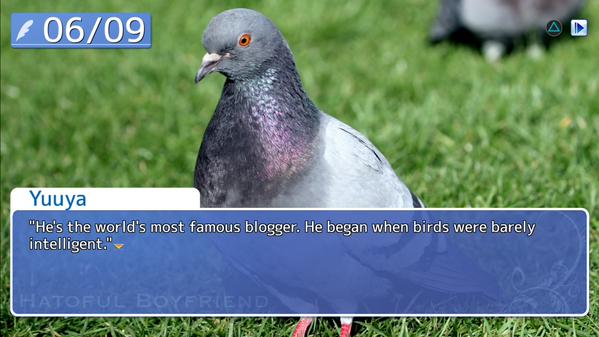 And then an ending that turns the world into pudding just because (relax, while this is something of a spoiler, there are a load of different endings and I promise I won’t give away any more of them): 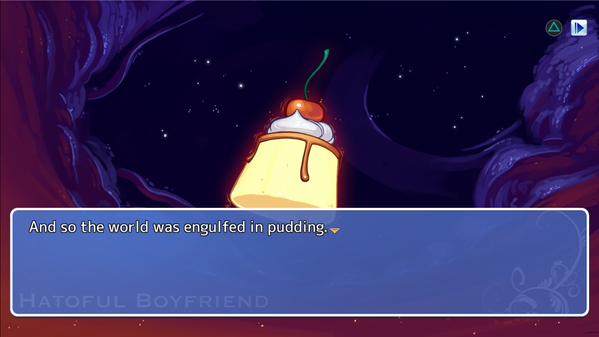 What is so incredibly funny about Hatoful Boyfriend is that it plays all this humour with an oddly straight bat. Characters don’t actually do crazy things (well, okay, one does, but the rest don’t). They’re just static images of birds and almost perfectly normal lines of text representing dialogue. Aside from the bits where, instead of saying “everybody”, characters say “everybirdy”, you would almost be able to read this game out to someone (who wasn’t looking at the screen, or was blind), and they’d assume you were playing a relatively normal game. The game constantly resists the temptation to point at itself and go “HAHAHA! Aren’t I funny because birdies?!?” Rather, it plays itself out more-or-less like a normal visual novel would… and then sticks pigeons and puddings in with a deadpan sense of comic timing for surreal kicks.

So unpredictable as the humour is that I found myself constantly surprised with the narrative that would pop up in response to the choices that I made in the game took me down a different narrative path towards a different ending, each more weird and wonderful than the last. Compared with many visual novels there are actually a lot of decisions to make in this game (though not quite as many as you might see in a proper dating sim), but it’s generally quite easy to tell what conversation path you need to take to end up with a certain bird’s ending. Each play through is surprisingly short, but with so many different endings, and with the knowledge of just how weird those endings can be, I found the replay value to be spectacular.

The art is so inconsistent that I gave up trying to understand it at about the same point I gave up trying to understand the narrative (almost instantly after starting to play). You’ve got these weird pictures of birds that fill the screen during dialogue, and then the occasional cut to an actual photo of a bird for other, non-dialogue bits of narrative explanation. Each character has a different musical tune for their theme song, and some of the classics pieces that accompany some of the birds are laugh-out-loud funny in their own right, though the quality of the recording is like someone got some random instruments together in their bedroom and recorded on a cheap computer mic… an idea that does actually fit with the tone and aesthetic of the rest of the game, so I assume that’s exactly how it played out. 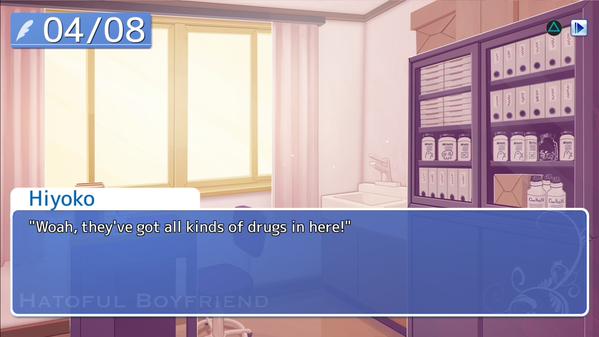 Of course, after all this I have absolutely no idea what to do about scoring the game. I can’t, in good conscience, actually recommend it to people. Not because I don’t love it (because I really, really do), but because I belong to a special crew of people that, firstly, like visual novels, and then secondly, have a taste for the surreal that is just enough so that I can appreciate balls insane games about dating pigeons. Moreso that that, my enjoyment of these things is enough that I can happily overlook the amateur production values and complete absence of logic about the entire experience.

You’re not getting a refined game in Hatoful Boyfriend. Surely you already knew that, right? If you were looking for a refined game, please ignore my score below. Otherwise, I’ll just let this scene from Friends starring my good friend Chandler do the talking, because, amazingly enough, it actually mirrors the experience I had playing Hatoful Boyfriend:

Digitally Downloaded is headed to SMASH! (With free stuff!)