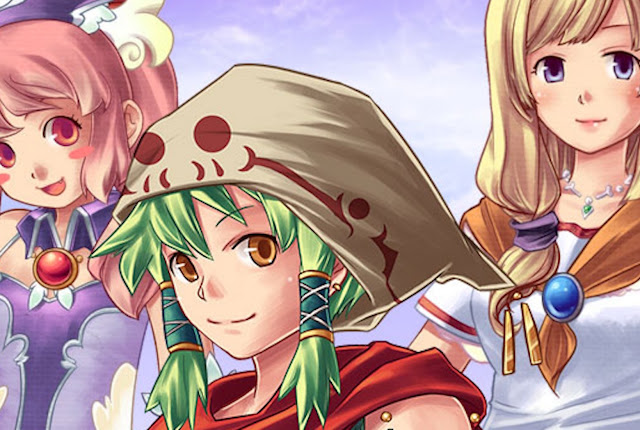 It’s always a good idea to play the worst games in your favourite genres. That way you can appreciate the good ones. Chronus Arc is one of the worst JRPGs I’ve ever played. In theory it wants to be a glorious throwback to the SNES JRPG tradition, but in practice it’s derivative, uninteresting and ultimately dull.

Related reading: Bravely Default would have to be the best “throwback” JRPG on the 3DS to date. Matt’s full review.

Billing itself as a “puzzle-based” JRPG was the first mistake the developers made in a very long list of mistakes. Chronus Arc does indeed include puzzles. Every dungeon environment that you’ll explore will have progress inhibited by at least a couple of puzzles. However, they are also the kind of puzzles that can be solved by a monkey, with almost all of them requiring players to simply slide blocks or carry pots around until every pressure switch in an area has a block on it. That opens a door or makes a staircase magically appear from nowhere, allowing your party of heroes to progress to the next area.

Almost no thought has gone into creating puzzles with a sense of environmental cohesion; they are simply in the dungeon for the sake of having a puzzle in the dungeon. Furthermore, the solutions to each puzzle is immediately evident. The game provides a quick reset option if you should get stuck to allow you to start a puzzle over again from scratch, and by the time I actually needed it (right at the end of the game, and because of a careless mistake on my part rather than struggling to figure it out), I had forgotten how to actually activate that reset command.

In other words; the key feature that Chronus Arc talks itself up with is an irredeemably flawed one. It’s a game about puzzles that fails to be remotely puzzling. And this lack of standards only becomes more extreme when you look at the stuff that the developers weren’t so focused on.

The combat is the most generic pile of trash I’ve experienced in some time, for example. Players have minimal control over character development, with each character being typecast from the outset (the healer, the one that does positive buffs, the one that debuffs enemies), and there’s almost no room to have those characters perform a different role in combat. Skills are generic, enemies lack any kind of visual impact, and attack and ability animations play out so slowly that the developers included a button to double the speed of everything playing out (why not just balance the animation speeds in the first place?).

There’s also a real love of difficulty spikes in Chronus Arc that mandates exposing yourself to even more of this unpleasant and dull combat system in the name of grinding. Each new dungeon makes for hard going at first, only to flip to become ridiculously easy once the characters have grabbed an additional experience level or two. 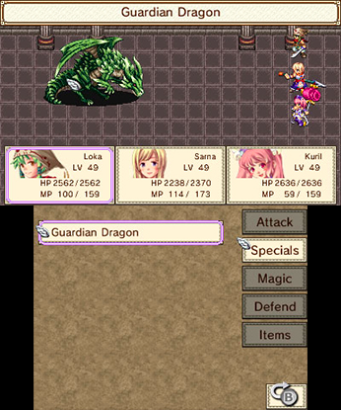 And none of this clunky pacing is in any way assisted by the narrative, which is an amateurish mess. Character development and motivations make no sense whatsoever; for example, for some reason an idol girl joins a princess and royal knight-in-training on their quest (standard ‘save the world’ stuff) because they agree to find her oversized hammer (?) for her. In theory I could accept that this could work as a way of introducing a character, albeit a fairly quirky one, but it needs to be written far better than it has been here, with overly truncated conversations giving no real sense of personality.

Related reading: Alphadia Genesis, also published by Kemco, shows that the publisher can back some decent retro-JRPG throwbacks. Matt’s review of the Wii U release.

That’s not to say you can’t do miracles in character development with minimalist dialogue; many of the SNES JRPGs that Chronus Arc so desperately wants to be are brilliant examples of that. Kefka from Final Fantasy VI managed to be a remarkably complex and nuanced villain, despite having precious few words to say. But to achieve that, every word needs to be carefully and deliberately chosen by the storytellers to have gravitas and meaning, whereas here the storytellers are really just slapping random words together.

The scale of the world is also artificial and limited. When the party leaves the first town, the minimap on the bottom screen suggests a vast world to explore. Once you goad the heroes into moving, however, it quickly becomes evident that the environment is actually tiny. Characters move around continents like they’re human bullet trains, and while all classic JRPGs are more linear experiences than anyone cares to admit, Chronus Arc takes this to a ridiculous degree. You’ll be spending this entire game heading in a single, clearly signposted, direction across the world, and, conveniently, towns and dungeons are placed just right around the space to keep you constantly focused on the next objective. 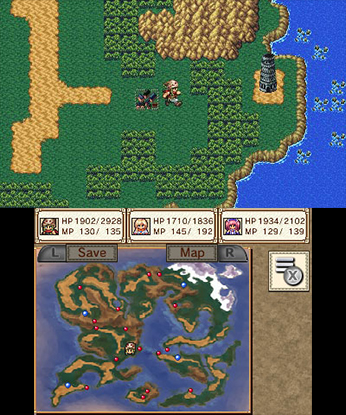 Compare this to the masterful environment design of even the earliest classic JRPGs. The original Final Fantasy, for example, had an environment that felt real. After acquiring the boat in the early stage of the game, and with only a vague notion that you needed to head south to find the elves, you would naturally find yourself docking at the most southerly point you could find, and then having to move inland a little, into a thick forest, to find the elves. You were provided with enough information to figure out what to do next, but at the same time you were provided with a sense of character, culture, and history in the world; i.e. the elves did live in a forest. It sounds simple, but it’s that cohesiveness to the environment that helps to set a stage for the broader narrative, and helps to draw the players into the world they’re being presented with.

That’s a simple example from one of the earliest of JRPGs, but it shows the attention to detail that Square put into its work to come up with worlds that made some kind of logical sense, and use the world as an integral part of the storytelling. Later efforts, most notably Final Fantasy IV and VI, would really refine the world building to the point where all RPG and JRPG developers really need to make a close analysis of the level design of those games to learn how to use them to become part of the broader narrative. But with Chronus Arc, towns are stuck smack bang in the middle of nowhere, with no logical reason to be there. In practice they are there because the developer felt the need to put a checkpoint and rest stops exclusively for the benefit of the player’s characters in that specific spot, and this contrivance makes the world feel incredibly artificial and uninteresting as a consequence.

Chronus Arc has some nice aesthetics going for it, I’ll give it that. Character portraits are nice – the princess, Sarna, is especially pretty – but it doesn’t do a whole lot with the art, instead backgrounding it in favour of the 16-bit style sprites, which themselves are nicely animated. The environments don’t push far beyond what you see in RPG Maker games, but at least they’re consistent. There’s a distinct lack of life about the world, though, with villages and cities filled with people content to stand in the one spot, simply waiting for the player to interact with them (another contrivance that adds to the artificiality of the experience), and enemy designs in battles are largely disappointingly generic. 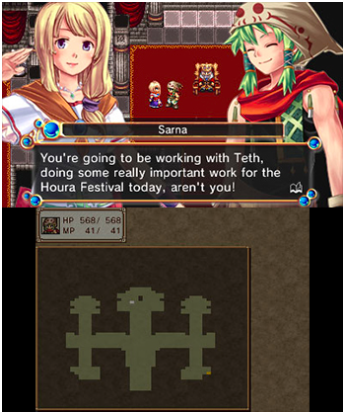 There’s nothing to actually recommend about Chronus Arc. Fans of 16-bit and earlier JRPGs won’t get the nostalgic rush they might hope for from this game because it’s so artificially put together it feels more like an insult to the memory of those games than a celebration of them. People looking for a good, simple JRPG will also be disappointed by the complete misfire by the developers in focusing the adventure on puzzle solving, only to throw puzzles at them that have no thought or effort put into them.

Related reading: On the plus side, it’s still better than Excave II. Matt’s full review.

The 3DS has one genre that it excels in beyond all measure, and that’s the JRPG. Chronus Arc sits behind, literally, dozens of other games that are much more worthy.