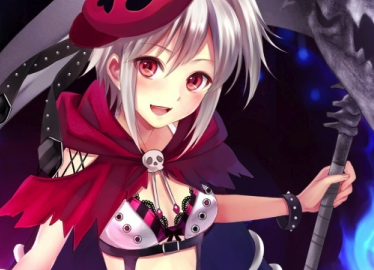 The good people over at Gematsu spotted for us a juicy bit of news in the leadup to the weekend. Compile Heart/ Idea Factory, the specialists in ultra-niche Japanese games, have launched a countdown website that strongly implies that a sequel to card battling JRPG, Monster Monpiece, will be announced in a week.

This is great news, because by all accounts, Monster Monpiece is actually a lot of fun. The original release was a Playstation Vita exclusive card-battling game that featured a unique mechanic; to power up a character, you needed to turn the Vita on its side, and vigorously rub in a motion that… well, let’s just say fits with the many very underdressed girls that the game features. Do that well enough and she’ll become more powerful and lose some of her clothing (yep, fan service abound in this one).

I say “by all accounts,” because I have yet to have the opportunity to play the game. Released as a digital-only title in the US, it never made its way to Australia, meaning that if I wanted to play it I would need to either go through the ridiculous process of switching accounts on my PlayStation Vita, or buy a second PlayStation Vita to set to the US region. While the Vita is region free (which I have taken advantage of to play a lot of retail games from Japan), the PlayStation Network itself is not, so I’ve had to go without playing this particular title.

But now it’s looking like everything’s coming up Matt. The original Monster Monpiece will be released on Steam soon enough (and hopefully it’s light enough that my inferior laptop will be able to run that one), and there’s a sequel on the way into English too.

But now I’m imagining the fan servicey goodness of Monster Monpiece mixed with something like Chain Chronicle, and I’m very excited indeed!

The Friday Ten: Ten of the best gaming collectables in 2015