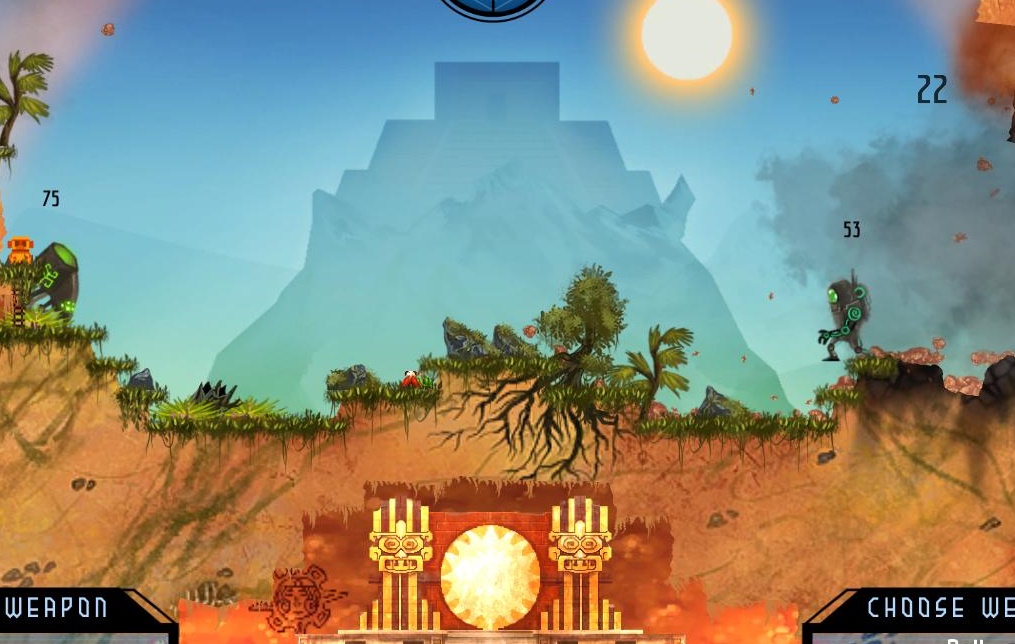 A few months back, I decided to hop by a games convention in the historic city of Antwerp to see what my fellow Belgians were up to in terms of game design. Despite my love for video games and my immersion in its community, I was ashamed to admit I wasn’t really up-to-speed on the local industry. While Belgian developers like Larian Studios have been standing in the limelight lately with the success of Divinity: Original Sin, my feelings of shame grew exponentially once I was presented with a collection of utterly engrossing games from a few Flemish developers.

My favorite amongst them was undoubtedly Mayan Death Robots, a recently released game by Sileni Studios, and I was lucky to get some questions answered by founder, lead designer, and programmer Karel Crombecq.

Related reading: You can check out Nick’s review of Mayan Death Robots here.

Digitally Downloaded (DD): Could you start by giving us a short introduction to Sileni Studios?
Karel Crombecq (KC): Sileni Studios was founded in 2012 as a two-man indie team. When I left my job at the University of Antwerp, I decided to pursue my childhood dream of making video games, and started my own company to do so. We first worked on a game called Castle Quest, but we abandoned the project after two years to work on Mayan Death Robots. This is our first big release.

DD: You acknowledge the influence of Worms on Mayan Death Robots on your website, but are there any other games that had a (strong) influence on it in terms of game mechanics?
KC: There are several games. Actually, the biggest inspiration was not Worms, but rather Scorched Earth, or Tanks, or even the old Gorillas game in which you threw bananas to each other. In Worms, you control a squad of fighters, while in MDR and Scorched Earth you only control one character.

There are several other influences as well. First, the idea of placing blocks in Tetris shapes came from the old Amiga game Rampart, in which you build a fort with Tetris blocks. Also, we took a lot of inspiration from fighting games, which shows in the character selection screen and the fact that each character has different attacks and a different playstyle.

DD: Perhaps the first thing I asked myself when I came across your game was: “Why Mayans?!” Not that there’s anything wrong with that of course, quite the contrary! What inspired this choice of setting and art design?
KC: There’s two reasons. Firstly, there’s a conspiracy theory called “Ancient Astronauts”. These people believe that the Mayas were visited by aliens, and say they recognise UFO’s etc in their carvings. We thought it would be funny to imagine if this was actually true, and build on that.

Secondly, there’s a practical reason. Our game is tile-based, and so is typical Mayan architecture. Both their statues and temples tend to have very square shapes, which makes them ideal for tile-based destructible terrain. It was a match made in heaven.

DD: Rather than destroying each other’s titular Mayan death robot, players are tasked with destroying the opponent’s detached power core, resulting in a fairly different dynamic than that of Worms. What was the reasoning behind this mechanic?
KC: Early on we added the construction gun as a big fixture of the game. The construction gun allows you to place blocks of ground on the level. However, if killing the robot is your objective, building in front of yourself would be the best use of the construction gun. But then you wouldn’t be able to shoot yourself! Having a separate objective to destroy makes the construction gun possible. 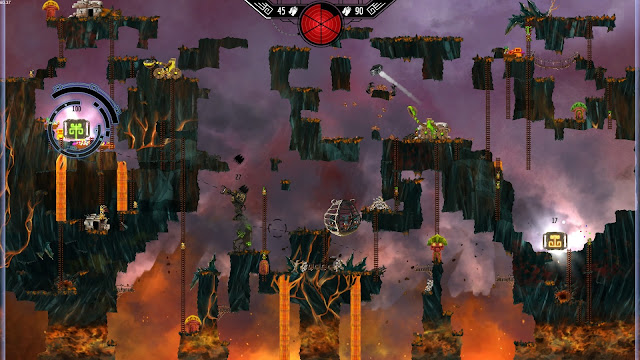 DD: What about the simultaneous-turn-based-combat?
The initial premise of the game was to make a much more fast-paced, modern version of Worms without all the waiting. The simultaneous turn-based system is the first logical step towards this goal.

DD: Do you have any plans concerning additional, post-release content (new bots, maps, weapons, etc)?
KC: Definitely! We are now working on the console release of the game, and we’ll be adding quite a few bits of content before we release on console. Of course, all content will also be freely made available to Steam owners.

One thing we’re looking at is a four-player mode, as this is a popular request from players. We’re also adding a tournament mode, in which you can upgrade and customise your robot in between matches. This mode was available in the beta of the game, but we had to cut it for release because we didn’t have enough time to do it properly. We’ll definitely be adding that back in the game in a few months!

DD: How was your experience founding your own game studio in Belgium/Europe? Were there organizations and initiatives that helped you with your endeavor? (VAF, FLEGA, etc)
KC: All these organisations didn’t exist yet (or weren’t doing anything in games) in 2012, when Sileni Studios was founded. We did get help building a business plan from iMinds, and we are funded by Cronos, which is a big IT company in Belgium.

DD: Was any of that help of a financial kind? e.g. subsidies, tax advantages, etc.
KC: We did apply for subsidies with VAF for another project, and we received the grant. The VAF Gamefonds is a very valuable tool for new developers, and it really helps a lot of smaller companies to get started. In the meantime FLEGA is lobbying for tax advantages, but at this moment there are none. 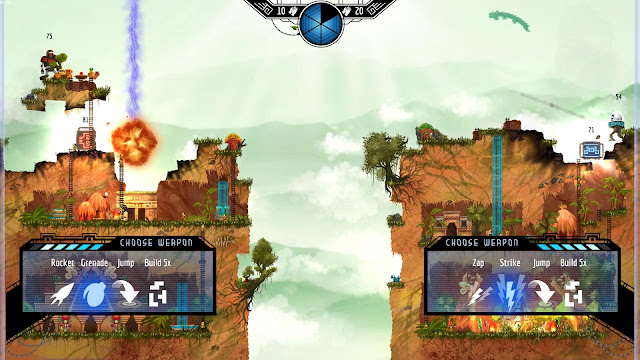 DD: Are there any measures/initiatives you would like to see in Belgium/Europe to stimulate small studios and indie devs?
KC: A tax shelter would be a big start. In other countries, a tax shelter really helped take off the fledgling indie game dev scene, and I’m sure that it will do the same in Belgium! Fortunately, FLEGA is working on this as we speak.

DD: Do you perhaps have some words of advice for game dev hopefuls in Belgium/Europe?
KC: Just start making games! Getting experience making (and finishing) games is the first step. All the rest comes after. Do game jams! Go to local events (Indie Game Salon, Brotaru) and share your game with people from the get-go.

DD: Any hints on what we can expect from you in the future?
KC: Right now we’re still hard at work at improving and porting Mayan Death Robots, so we haven’t yet decided on a new project. Nothing more I can tell you, sorry!

DD: And a final question: what games are you enjoying right now?
KC: I’m hooked to The Binding of Isaac Rebirth again with the release of the Afterbirth expansion. I also played a LOT of Metal Gear Solid 5, which I think is the best game of the year. Other games I played and enjoyed recently are Kingdom, SpeedRunners and Broforce.