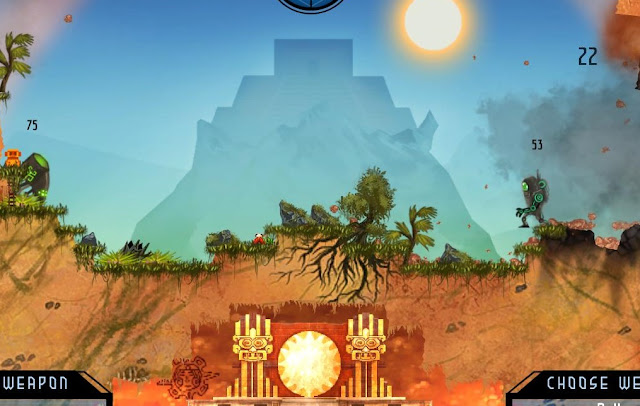 Mayan Death Robots quite clearly deserves to have comparisons made to Team-17’s Worms series. With that being said, there are a handful of twists beyond its unique theme that makes it worthwhile fun and help it to stand out just enough to avoid any claims of plagiarism.

Related reading: You can check out Nick’s review of Worms: Battlegrounds, one of the latest in the series that clearly inspired Mayan Death Robots, here.

Outside of the Worms titles, I have not played a lot games in which artillery fire back and forth is the focus, at least not in recent years. But I’m a fan of the genre; I recall spending far more time than I probably should have back in my high school library playing Scorched Earth with some classmates during study hall. That was my first taste of this kind of game, one that blends some physiques with some competitive fire and well… explosive fires as well.

So I went into Mayan Death Robots with a good frame of mind, and immediately found it to be delightfully weird and kooky, with the concept powering it being an alien race kicking off another season of their over-the-top television show: Mayan Death Robots. This “year”, the season has chosen Earth as the lucky planet to host the contest, and upon arrival, the Mayan people inhabiting Earth understandably and quickly mistake these robots for gods. It is then only a matter of time until the Mayan community attempts to support their own preferred god, as they do battle with one another for supremacy. 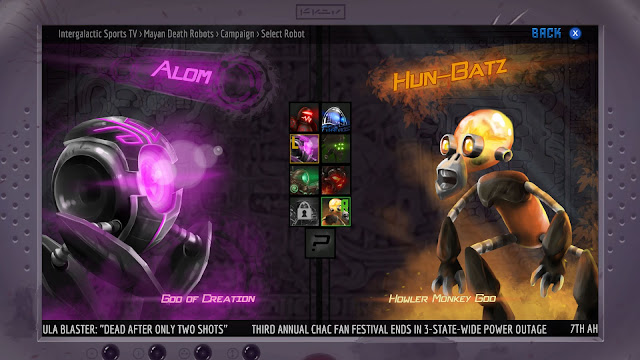 If that all sounds just a little weird, then I likely undersold it, because it really is incredibly goofy. Initially you start the game with six robots to choose between (though four more can be unlocked during gameplay). In each match, two of those robots are placed around a 2D arena, just as the worms are from the Worms series. However, where Worms was a battle to the entire annihilation of the other team, in this game the victory condition is not in destroying the other bots, but rather the power core that each one is defending.

Rounds play out differently as well. Instead of taking turns shooting at one another, the two combatants queue up their moves for simultaneous execution. That is a cool mechanic that forces played to think differently about their strategy; when they’re not sure what their opponent is going to do, the strategy of the game requires a bit more foresight than is typical under a true turn-based strategy system. A turn can consist of moving around, taking a shot or trying to improve one’s defensive situation. On the surface, it is all pretty cut and dry, but the experience becomes very tactical as players try and guess what they’re opponents are going to do, and then make those opponents second guess what they are doing.

Now when it comes to gameplay modes, you are basically looking at two. You can play a match against another person, or trek out on your own. Each one breaks down into a couple of different types as well. You can do a quick match or the campaign. Quick match is pretty basic stuff: robot versus robot to try and destroy the other power core. The campaign is the more accurate emulation of what you would have thought the television show concept would enable, with tougher objectives and more varied environments across a number of battles. That environment is rendered in a bright and colourful art style that is highly destructible. The gameplay is more varied, too; even the ‘kill the core’ mechanic gets shelved during campaign mode when bosses turn up. These fights seem cool at first, and I appreciate that they mix up the gameplay some, but their encounters are not as good as the rest of the campaign and I found myself disinterested in them by the time I reached the game’s later stages. 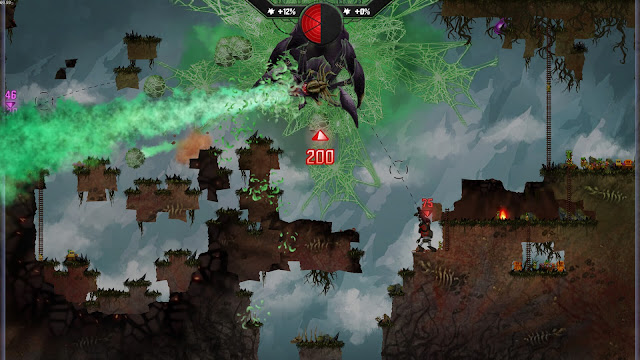 The biggest misstep was in only offering local multiplayer. This is a game that practically begs for online multiplayer. I used to play Scorched Earth and Worms with a couple of my buddies online, and it was a great way to pass the time, and the online was convenient when people weren’t around for some local gameplay. But here, unless you have someone handy in your place to play against, Mayan Death Robots will force you to miss out on its best mode and features, and that is a shame. A few other small setbacks keep this otherwise fun game from completely resonating with me. Customisations are pretty limited, and the keyboard and controller options (there is no mouse option) are incredibly fickle. There is sometimes a need for fine tuned aiming and the controls here simply do not cooperate as much as I would have liked.

Related reading: And for a different take on Worms from another of the DDNet team, check out Matt’s review of Worms Revolution Extreme on the PlayStation Vita.

The base gameplay in Mayan Death Robots is quite entertaining. I certainly enjoyed the pacing, and could appreciate some of the tactical depth lurking beneath its humorous, brightly coloured surface. But lacking online multiplayer as it does, this is going to come across as a severely limited game to too many people for its own good.