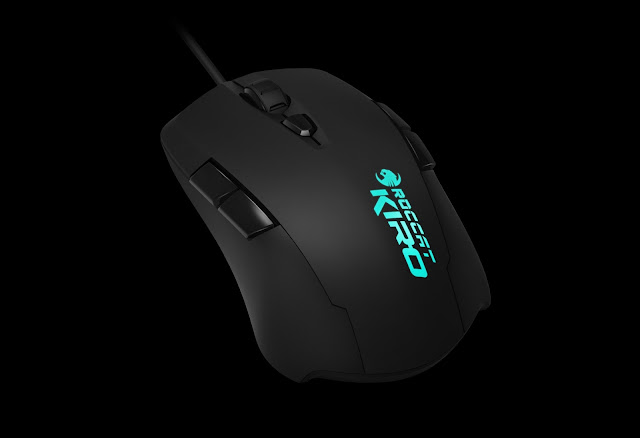 If you’re familiar with the Roccat brand then you’ll be expecting this review to contain words like innovation, quality and customisability. You’ll be expecting quirkiness, some cutting-edge features, and the best driver software in the business. What you won’t expect is an affordable, entry-level gaming mouse that appeals to just about everybody. Ladies and gentlemen, it’s time to put away your preconceptions. It’s time to take a look at the Roccat Kiro.

The Kiro feels like a radical departure for Roccat. In recent years, the company has pushed for ever-higher sensitivities – I remember reviewing the Savu, the world’s first 4000 dpi optical mouse – and it has introduced some weird and wonderful devices that cater for ever-more-niche segments of the PC gaming community. The Kiro throws all that out of the window. Not only does it have a modest optical sensor, but it also comes with a conventional ambidextrous shape. This, then, is a mouse for lefties, righties, casual gamers, and those who want Roccat quality at an affordable price.

Let’s start with the shape. If you’ve ever used a bog-standard office mouse then you’ll be fine with the Kiro. It’s maybe a little wider around the rump, but the overall shape is remarkably similar to everyday mice from the likes of Dell and Lenovo. That’s a good thing; office mice are designed to be used all day, every day, by a wide range of different users. By parroting this basic form, Roccat has ensured that most people will be able to adapt to the Kiro with very little effort. 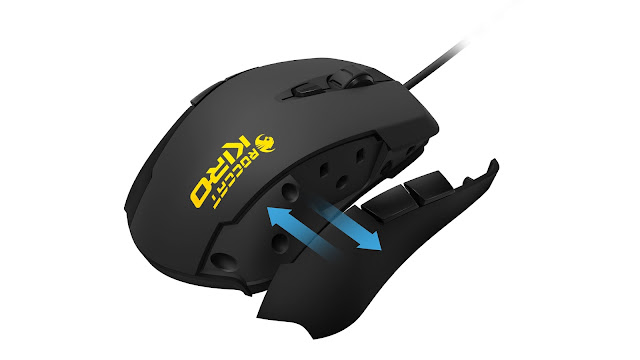 That’s not to say that the Kiro looks cheap or conventional. While you won’t find high-end features such as a gold-plated USB connector or a braided cable, the rest of the chassis is of top-notch quality. The mouse features industry-leading Omron switches, Roccat’s dependable 2D Titan wheel, a pleasant non-slip coating for the upper surface, and a pleasingly grippy finish to the sides. Remarkably, it’s also possible to customise the chassis to your liking. The mouse features four side buttons – two on each flank – but if you don’t want those then you can simply replace them with the button-free sidewalls supplied in the box. Roccat have promised that it will make additional schematics available in the near future, so there’s a strong possibility that you’ll soon be able to customize your mouse even further via the miracle of 3D printing.

The Kiro’s specifications are a step down from Roccat’s usual Pro Gamer offerings, but they’re still more than adequate for everyday use. The native 2000 dpi sensor can be boosted via software to a maximum of 4000 dpi but, as we’ve seen with similar technology from Steelseries, the very highest settings can feel a little jittery. Nevertheless, I thoroughly enjoyed using it for twitch shooters, as long as I didn’t push the mouse’s sensitivity too far into the overdrive zone.

No Roccat review is complete without mention of their excellent driver software. In the Kiro’s case, the control panel allows the basic tweaks that are possible for many of their mice – things like lighting, sensitivity, lift-off distance and so on – as well as brand-loyalist exotica such as Roccat Talk and Alien FX. However, the driver ditches things like programmable macros and multiple gaming profiles, reinforcing the impression that the Kiro is meant for the less hardcore crowd. 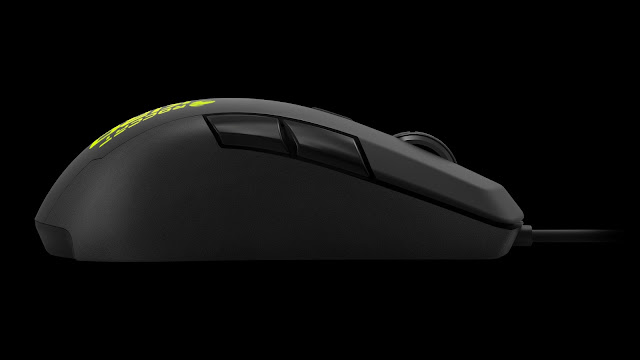 Related reading: All of our Roccat gaming hardware reviews.

There’s plenty to like about Roccat’s latest offering. If you can look past the low native dpi and pared-down software, you’ll find an extremely comfortable device that’s packed with fun and innovative features. As a reasonably-priced, entry-level mouse for casual gaming, the Kiro is something of a triumph.

You can grab this mouse from Amazon:
Share this

On King’s Quest – Episode 2: Rubble Without a Cause: Life is filled with difficult choices