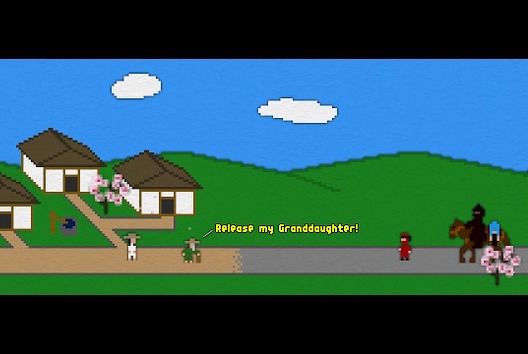 Here’s a free lesson to all game developers out there: making a game’s visuals pixelated and calling it “retro” isn’t going to hide a staggering, insulting lack of depth. People are smarter than that.

Related reading: For an example of a developer that at least tried to do something interesting with the runner genre, check out Matt’s review of Infinity Runner.

And yet that’s exactly what Kung Fu Fight! is; a staggeringly shallow runner platformer that makes use of 8-bit style sprites and background exclusively because, I believe, the development team lacked the talent to do anything else. Except they didn’t even do the art particularly well; if we were back in 1983 or whatever, this pile of tripe would still be called ugly, and only thing going for it – the nostalgia of such a primitive art style – wasn’t even a thing back then so critics really would not have had any patience for it.

There’s an evil warlord. He’s captured a woman, strapped her on to the back of his horse, and sped off. You’re playing a kung fu master that needs to chase him down and rescue the girl. For a game that has about five lines of dialogue, for it to manage to load so many offensive clichés into one “story” is, in a way, impressive, but not in a positive sense of the word. Hell, the opening line is “a long time ago in China, or was it Japan? I always get the two mixed up.” It’s not even slightly funny (and if you did laugh at that, grow up). Worse, it’s utterly culturally insensitive. I assume the development team simple didn’t realise what they were doing, but both the Chinese and Japanese would find that “joke” deeply offensive. 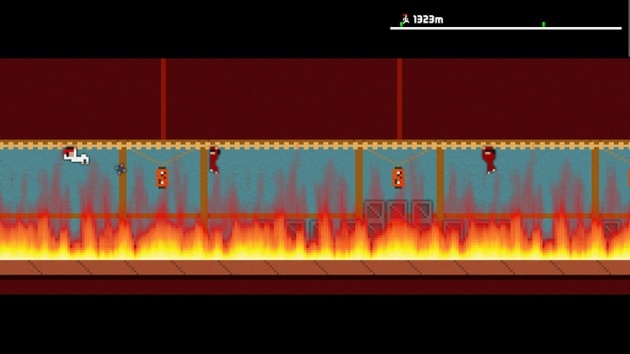 Supporting that complete lack of cultural research (because why would you research Japan and/ or China before setting a game there?) is a setting ripped from every bad B-grade kung fu film you’ve ever seen, pixelated down into an ugly, blurry mess, minus any kind of cultural context. You’ll be pelting through buildings and environments that have homogenised Chinese and Japanese architecture, landscapes, and people in the most spectacularly ignorant manner I have ever seen.

The game is also quite sexist, which is, again, incredible, since they managed to do so in literally three lines of dialogue. In concept the game’s meant to be one of those “rescue the princess” deals, which is old school sexism enough, but then the evil warlord that you’re chasing down comes out with this pearl of a comment; “You have failed to pay your tribute, so I am taking her as payment.” Not only is she a damsel in distress, but she is literally commoditised as a possession, and that is about as far as character development goes for either her or the warlord.

Of course, the developers will no doubt try and argue that the narrative is inconsequential and the point of this was to make a retro-styled game that is fun to play. That being the case, the first thing they should have done is not bothered with a “story” at all – if you can’t do something well, focus on what you can do. The other issue is that it’s not fun to play in the slightest. As a runner, your little fellow bolts, slides under tables, smashes pots that are just sitting in the middle of the floor, punches shuriken-tossing enemies in the face and then bounces across boxes that have conveniently been placed to create dangerous gaps to jump across. He’s on auto pilot in terms of his movement, but you’ve got control over when he jumps, slides, or punches. 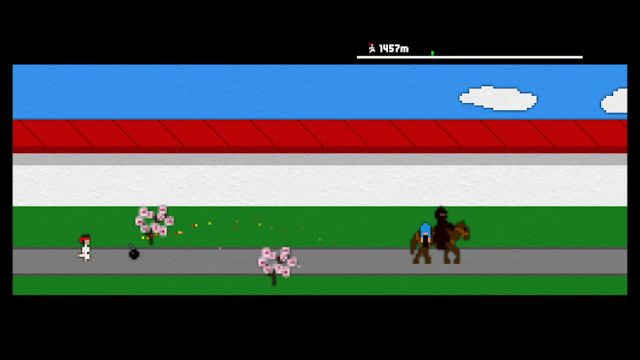 Apparently no one told the developer that game design has grown up since the heady early days of the 80s and environmental believability now counts for something. If you go sticking a room that is on fire just because you can, when the rooms on either side of it are somehow fireproof then your audience is going to tune out and not even try to suspend disbelief. If you’re sticking pots on the floor in the middle of a room without any other decorations (or reason for the pot to be there), then you’re making for arbitrary, and therefore dull, level design.

Other games might make a joke of this all, with a nudge and a wink to the audience to let them know that, yes, this is all arbitrary nonsense left in the 80’s for good reason, but it’s okay because that’s part of the joke. Not Kung Fu Fight!, though. Oh no. Because the narrative is so incredibly thin and there is nothing to properly define or identify characters, there is also no time for the developer to establish any sense of humour that they might have had in mind when starting out. If this game is indeed satirical, all the jokes are insider comedy, and from an outsider looking in, I certainly wasn’t laughing along.

Aside from the “story” mode, there’s an infinite runner mode, which simply removes the five lines of woefully offensive “narrative” and allows you to keep on running until something finally downs your hero. If you’re anything like me that will happen quickly, because you’re so deathly bored about the whole thing. That infinite mode showed the best potential that the game has, in focusing on the running part, which does function well enough. But of course with no online leaderboards, gunning for a high score isn’t exactly the most inspiring use of a person’s time. 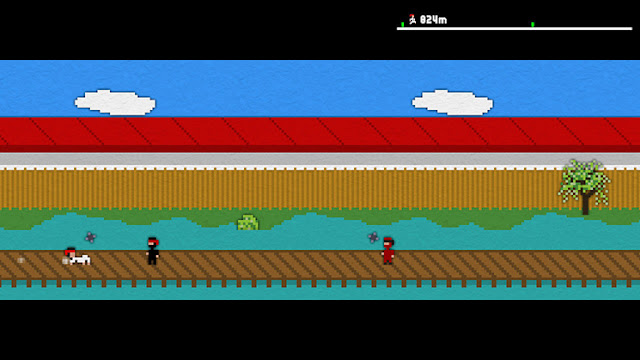 Related reading: The Rayman runners on iOS, however, are excellent examples of the genre.

I was tempted not to review Kung Fu Fight!. It’s a terrible little game, but given it had no profile whatsoever, it’s just going to disappear and be forgotten about in a couple of weeks. But it is so purely irritating that I felt like I needed to get this review out there, because there are a lot of indie games that, while better than this, follow many of the same issues. They hide behind nostalgic pixilated visuals, stick safely to existing game tropes, and are really quite culturally tone-deaf. While I love that digital distribution has allowed indie developers to create some genuine masterpieces that would never have had a chance otherwise, games like Kung Fu Fight! are the other side of that particular coin. If we didn’t have digital distribution there is no way a game like this would have ever been inflicted on us, and that wouldn’t have been a bad thing at all.

Game Theory: On pin-up art, Dead or Alive, and why it’s not objectification