I am a huge fan of the Dragon Ball universe. I was first introduced to it via a children’s breakfast show in Australia called Cheez TV. Through the show, I was able to watch Pokémon, Earthworm Jim and Dragon Ball Z on a daily basis, it almost became a religion. Needless to say, I was excited for Dragon Ball Z: Extreme Butoden for the 3DS, as I very much wanted to revisit the universe I spent so much of my teenage days dreaming about.

Related reading: Fans of Dragon Ball should check out the recent movie, Resurrection ‘F’, if they haven’t already.

To say that the final product is possibly one of the most disappointing games I’ve ever experienced is not an exaggeration, this is coming from a guy who has had to review some pretty disappointing ones over the years.

Dragon Ball Z: Extreme Butoden is a 2D sprite based fighter not too dissimilar to the X-Men Vs Street Fighter games, complete with a tag team system in place. What the game does is take these elements and executes them poorly, and adds in an abridged version of the storyline from Dragon Ball Z which won’t actually make sense to those who haven’t already viewed the anime. The game feels like it was rushed, and the longer I played, the more I wanted to destroy any evidence that I have ever played any of it. 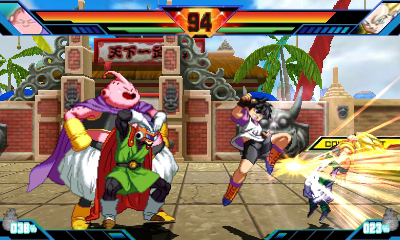 The game forces Story Mode onto unsuspecting players, as completing the first ten battles is required to unlock the adventure mode. Everything was fine at the beginning, upon checking Goku’s moves, he was able to defeat opponents rather easily, then came the first indication that this game was nothing more than a cash grab. Vegeta, Gohan, Krillin, and just about anybody else in the game all functionally behave the same way, with some visual differences in the attacks working to mask was is a very limited variety in gameplay. Every character in the game moves, reacts and fights far too similar to one another, and as a result, there’s never the sensation that you’re in control of unique characters with unique fighting styles. All of the special moves and combos are all executed with the same button inputs, all the game does is reskin the attack to suit the character, so Vegeta will do his Big Bang Attack, whereas Goku will execute the Kamehameha. The game quickly becomes incredibly repetitive as a consequence.

The Story Mode, from a narrative point of view, tries to retell the entirety of Dragon Ball Z in roughly fifteen minutes. Yeah, it’s works as well as can be expected there. Each cut scene is represented with images of the characters and a dialogue box at the bottom. Once the main narrative has been completed, the game presents a range of characters in what it calls “what if” scenarios, except the scenarios are not actually “what if” scenarios at all, as they are the exact same Dragon Ball Z story, except told from a different character’s perspective. Very disappointing.

Once the Story Mode is finished, Adventure Mode is unlocked, which at least offers an original story to play through. Basically something happened with the time/space continuum, and every bad guy that died has come back, as well as characters from the original Dragon Ball and GT. It’s just an excuse to have a mode that incorporates all characters beating up on one another, and as you can probably guess, that’s hardly classic literature material. Despite Goku being the central character, the game allowed me to choose to play as anyone from Krillin to Perfect Cell in order to take on the opponent in the battle, then the game carries on as if Goku was the one who was victorious. 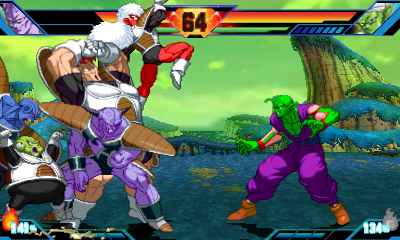 In terms of the playing roster, it’s pretty much only the main players from the Dragon Ball Z television series. So there is no ability to play as any original Dragon Ball, Dragon Ball GT or Dragon Ball Z Movie characters. Even Z fighters like Goten, Tien and Yamcha are completely unplayable, and prominent henchmen like Jeice, Androids 16 & 17 and Dabura, who really should be playable themselves, are relegated to ‘assist characters’, where a tap on their face on the touch screen brings them briefly into the fight to execute one move, before they leave again. Most of these characters were the most unique fighters in Dragon Ball Z, so I guess it isn’t a surprise that they weren’t included, as it would have taken some actual effort to incorporate a second fighting style.

Related reading: The Dragon Ball games are faring far better on console, however, as Nick’s review of the recent Xbox One title shows.

Generally, kids are told “if you can’t say something nice, then don’t say anything at all”, so, yeah. I might stop now before I let myself really go on how disappointing this whole experience has been to me, the very target audience for it.

On Life Is Strange: Part 5: All good things come to an end