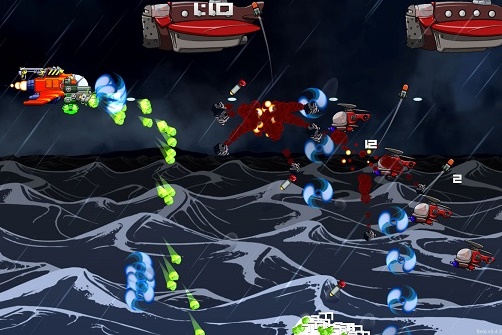 Despite what other reviews are saying, Reign of Bullets is more Metal Slug than Borderlands. To describe the game in the most blunt fashion as possible: it gets right what most scrolling shooters struggle at, with light-hearted humour, cartoony graphics, simple yet addictive upgrading system, and excellent production values. This game feels like an over-enthusiastic friend at a party who’s more dedicated to making the occasion more exciting and memorable for you than himself. Said friend wants you to enjoy to the max – which is pretty much what Reign of Bullets shoots for and ultimately succeeds in.

Developed by Critical Bit, Reign of Bullets is a horizontally scrolling shooter that follows the template of danmaku, or bullet hell shooters. The presentation is cartoony that does bring into mind Borderlands, but this is where the comparison starts and ends. The game also features a solid upgrading and customisation feature that is far better implemented than two similarly veined games I played (and reviewed) this year, Armed Seven and Ironcast. Not only it is intuitive but extremely fun to get into and navigate your way around it. I usually spend as little time as possible on things like these in other games, but here I went the extra mile to learn and understand all the quirks necessary to bring up my ship to the appropriate pace. 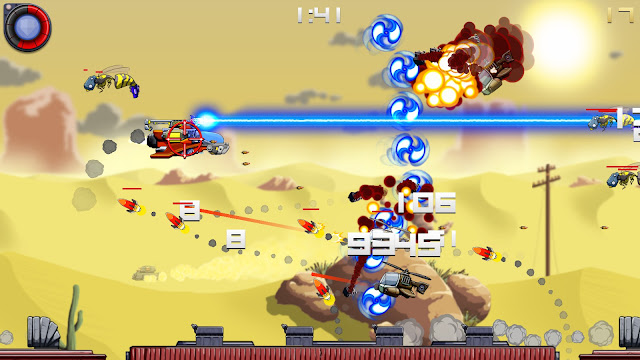 Being a shooter, it is understandable that the story is minimalist, but what little it employs has charm and humour. Not too many scrolling shooters have strong narratives, and there have been only a handful of such examples – Ikaruga, Radiant Silvergun and Sine Mora, to name the highlight narratives of the genre. The story of Reign of Bullets goes that evil corporation, Titan, has destroyed the garage of small-time mechanic, Troy. Now you must fight wave after wave of Titan’s superships and reclaim back what is yours. Ordinarily, a story this simple should not win any awards or even a mention, but what makes it stay in your head is the way it plays out. Using a style very similar to Twitter, every mission is precedented with a hilarious Tweet battle between Troy and Titan – with the occasional bit of advice or two thrown in for good measure. Because the “Tweets” are random generated, you will get a new one every time, and they’re all fun to read. I for one really enjoyed the humour and wish more scrolling shooters would deviate themselves away from attempting serious philosophical tones that, frankly, most are not up for, to a much lighter one like this.

The music is pretty solid too – the main menu theme is among my favourites now. All in all, Reign of Bullets is a nicely packaged shooter that is at once enjoyable and memorable. It doesn’t take itself seriously and gives you plenty of elbow room to customize your ship and just go ape-crazy with your creation. Do you find comfort in heat-seeking drones? Well, you can pretty much equip your ship with just those and nothing else. Lasers your thing? No problem, you can finish the whole game with seven or eight of those. And you know something, it doesn’t stop there. Reign of Bullets, as far as scrolling shooters go, is a fresh breath of spearmint air and could very well be a champion of the modern shooter. If you haven’t played it, do yourself a favor and give it a go.