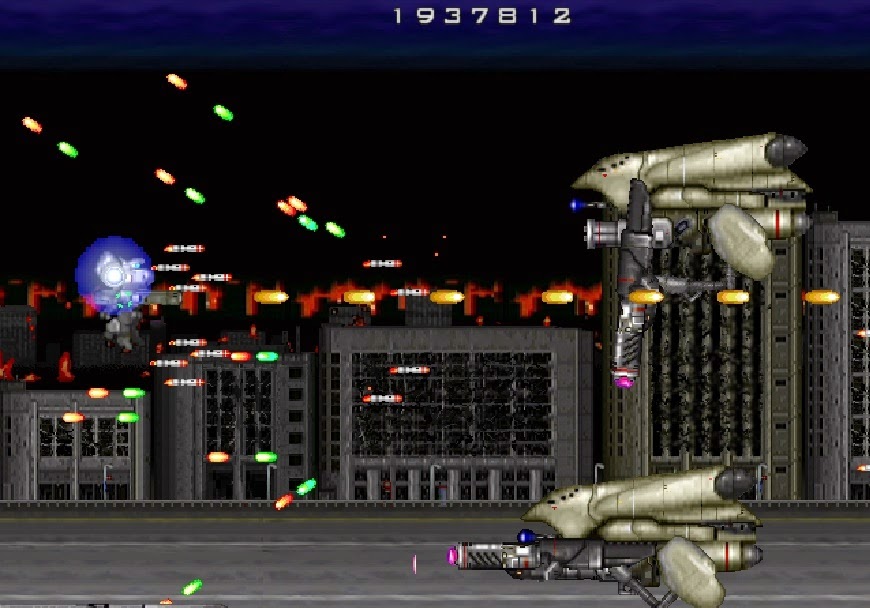 Playing Armed Seven is a lot like watching a movie that has an actor whom you vaguely remember from another flick, but for the life of you cannot seem to recall where. It is only when you pause the film and stare into the middle distance that the fog surrounding your memory starts to diminish. It’s the same with this game: Armed Seven’s similarities to scrolling shooters of old is so severe that you will be hard-pressed to acknowledge and recall all of them.

But this doesn’t mean this game is a bad one. Far from it. Despite taking obvious cues from classic arcade and console shooters like AxeLay, Cybernator, Bio-Hazard Battle and Forgotten Worlds, this game has in it a Dark Souls-type approach to memorising enemy movement and attack patterns that adds a good level of strategy into the mix. Armed Seven is a challenging game, even on a lower difficulty setting; that means you will die often, but thanks to the weapon customisation option, you can rectify your numerous failures through the combined firepower of SRI-T8 Riot Gun and GDW-54 Beam Cannon (or if you prefer a more Gunstar Heroes-like approach, an AO-06 Missile Pod, which shoots out a volley of heat-seeking missiles).

The weapons are categorised into three types: main, sub, and charge. Any combination from the first two greatly influences the recharging time of the charge. Suppose if you select semi-powerful weapons as both your main and sub, your chosen charge (any) will have a slow recharge time. For the more experienced player, this approach is the most recommended – as you can rely on your primary and secondary weapons to dish out damage and/or weaken an enemy until the special finishes recharging. But for beginners, I suggest the combination of the MJ-04 Machine Gun as your main; TB-02 Rocket Launcher as your sub; and AO-06 Missile Pod as your charge weapon. This setup significantly reduces the recharging time of the Missile Pod, and you can use this to your advantage to dish out some serious damage. The only downside to activating the special is you cannot fire your main and sub in the duration that it lasts. 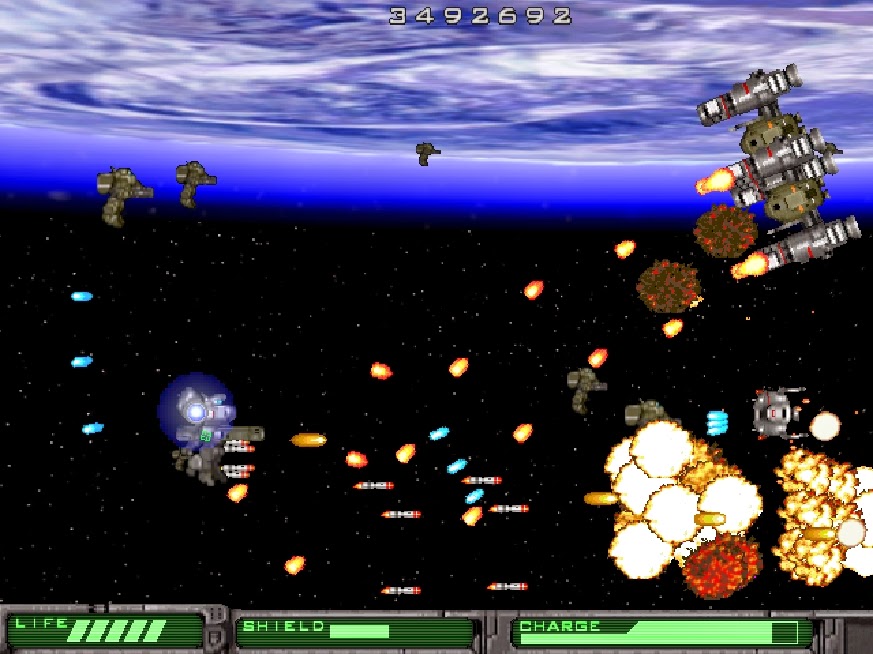 The story of Armed Seven is nothing short of the save-the-planet-from-alien-invasion cliche; only this time it adds more absurd names like “Neo Loran” and “Gorgoh” into the mix. Seriously though, the story is nondescript and arguably one of the weakest I’ve seen in a scrolling shooter. Classic games from the genre, like Ikaruga, added philosophical themes to add more spice to flavor; but Armed Seven does nothing of that sort. The music on the other hand is surprisingly well done and really compliments the frenetic pace of the game. The metallic, hollow music that greets you at the menu really captures and sets in tone the unforgiving nature of the game.

Speaking of which, Armed Seven is unabashedly brutal. It practically grins from the cruel deaths you meet at the mecha-hands of enemy hordes. While the recurring enemies can be fairly easily dispatched, the bosses are plain unforgivable. If you find yourself playing a certain stage all over again in a lower difficulty out of sheer frustration, then you’re forgiven – I certainly did. The boss battles are everything you’ve come to expect from scrolling shooters: big, loud, nasty and, at first, seemingly impregnable. At least they didn’t go the whole cliche and come with glowing weak spots.

Related reading: This game is available on Steam now, but we also reviewed the original release of it on PC a couple of years ago here.

In conclusion, Armed Seven is a worthy genre piece. It is an easy recommend for any shmup fan out there, and though its short length may turn some off (it only has six levels), the brutal, merciless nature of the game, and the robust controls should be more than entertaining enough to encourage you to come back to try to master at least one combination of weapons.

Interview: The man that killed a chocobo to make a Final Fantasy game