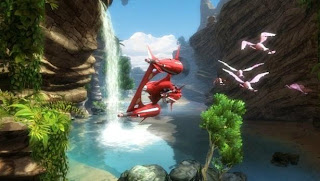 Grasshopper Manufacture’s Sine Mora has done the rounds for a while now – it’s on PS3, Xbox 360, PC and was even a PS Plus “freebie” on the Vita. And now, it joins Liberation Maiden as a Goichi Suda production to hit the iPad.

If we’re being brutally honest though, Sine Mora doesn’t belong on the iPad. As a device, the iPad does do games well – especially in genres such as the board game, strategy, casual games and puzzlers. There are great RPGs and even some quality platformers that use the touch-only controls to good use. But there are genres that struggle on iOS. Any game that demands fast and precise movements in an action setting have trouble. I’ve yet to find a FPSer game that I’ve been really comfortable playing, for instance. Bullet hells and shmups are another example, and so Sine Mora struggles.

That’s not to say it controls badly. Just like Liberation Maiden, the port is handled expertly, with an ergonomic layout of the virtual buttons ensuring that players have solid control over what they’re doing. On top of that, compared to playing the game on a small screen, such as the PlayStation Vita’s, the extra real-estate of the iPad makes the vibrant visuals and great enemy designs much more pleasing on the eye. 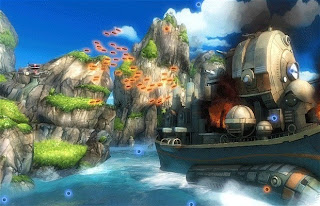 This is important, because Sine Mora’s greatest selling point is the fact you’ll want to play it on the best screen you can access. This game is unbelievably beautiful, with vibrant backgrounds filled with bright colours and slick animation highlighting the spectacular boss designs.

However, while the iPad’s retina screen is by far the best portable screen you could access, more than any other genre, the bullet hell genre requires players to be intimately familiar with their controllers. There’s no room for imprecision, and as every fan of the genre will be more than happy to confirm; these games are just too challenging and intense for even the slightest frustration with the controls.

It’s difficult to become so familiar with virtual controls that they fit like a second glove. Even I as an advocate of iPad gaming, in no small part because I’m a fan of board games, strategy games and RPGs, none of which require fast controls, must admit that. With Sine Mora I do think we’ve hit the ceiling in terms of what the iPad can do as a gaming device. 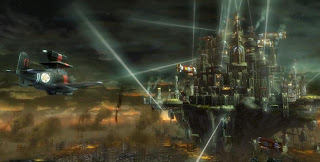 Having thoroughly devoured the Vita version, I found myself slipping into to the path of an enemy bullet one too many times. I found some bosses just slightly too difficult for their own good this time. I still love the game, but I’m going back to the superior Vita version. I wouldn’t even want to try the iPhone version.

Goichi Suda’s got a catalogue of games that would be perfect for the iPad. Flower, Sun and Rain, for instance. Or Contact, that brilliantly quirky DS game. Even Fatal Frame IV (of which he was director/ writer) or Killer 7 – the iPad is becoming a go-to device for PS2/ Gamecube/ Xbox/ Wii era ports, and those games are games we’d love to see ported in some fashion.

But of all Suda’s catalogue, the bullet hell was always going to be the one least likely to succeed. Despite being ported so professionally, and despite looking so good on that iPad retina screen, the genre just doesn’t mesh with the gameplay. Fingers crossed that an update comes once the officially-supported Apple game controllers come.

An early look at the creatures of Monster Hunter 4