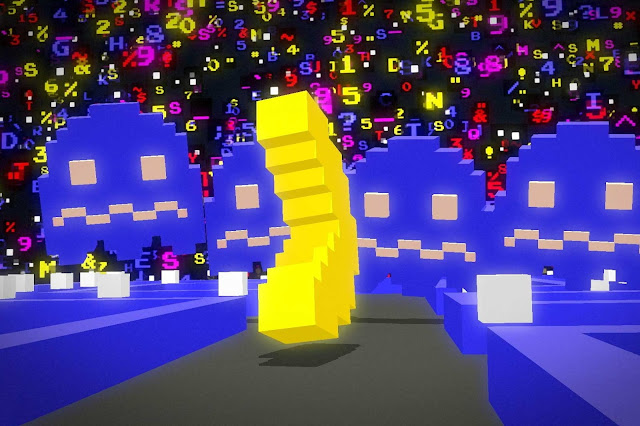 Damn it. Just as I was getting over my ridiculous obsession with Crossy Road, along comes Hipster Whale’s follow-up. Pac-Mac 256 is proof of the impact that the tiny Aussie developer had on the industry, as Namco Bandai would allow it access to one of its most valuable franchise to essentially skin over as a sequel to Crossy Road. Unfortunately (for me), Pac-Man 256 is every bit as addictive as Crossy Road. There goes any hope I might have had to be productive in some way on every train trip I’ll be taking for the next couple of months.

Related reading: For another attempt to modernise Pac-Man, check out Pac-Man and the Ghostly Adventures 2. Nick’s full review.

Effectively, Pac-Man 256 gives players an endless, randomly generated Pac-Man level to progress through. As with Crossy Road, the goal is to move your character from the bottom of the screen ever northwards, avoiding obstacles while gaining points. Unless Crossy Road (where points are earned simply by moving forwards through the game space), in Pac-Man 256 you’ll need to direct the yellow circle to eat dots to score points, and rather than avoiding trucks and cars as you do in Crossy Road, here you avoid Pac-Man’s ghosts.

To get really good scores there are Pac-Man’s power pellets which, once munched on, allow you to attack the ghosts. There are also Pac-Man’s fruits to collect which act as a score multiplier, and are essential to really get the scores going. Other than that, you’ll continue playing until a ghost finally catches you, and which point you’ll either earn a new high score, or start again to try and earn a new high score. It’s that simple. 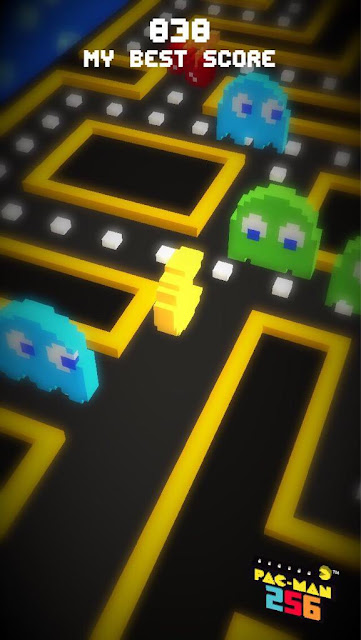 Unlike the original Pac-Man, though, these ghosts have slightly a slightly greater range of brains driving them. Each colour of ghost has its own attack patterns. One will remain stationary until it senses Pac-Man moving past it, at which point it will “activate” and move like crazy. Another will typically appear in groups, which makes avoiding them difficult. Individually none of these ghosts are particularly hard to avoid, but in groups, and as the speed of the overall game picks up, staying “alive” becomes really quite challenging.
Because levels are randomly generated, there are times when some truly unfair combinations of mazes and enemies will ruin your game with skill offering virtually no way to avoid a game over. These come rarely, thankfully, and at the same time, Pac-Man 256 is never so frustrating as to stymie the “one more go” compulsion that the best arcade games tap into. Especially when the game makes it so easy to share top scores and screenshots on Twitter and Facebook. I don’t know about you all, but my friends and I tend to be competitive and this game is just the kind of game to stroke those fires and have us all hooked, all trying to one-up one another.
That’s Pac-Man 256 in a nutshell. It’s simple, and it’s glorious. The isometric art style, which is essentially Crossy Road in Pac-Man colours, is gorgeously addictive for a modern audience, and the classic music samples helps to scratch that nostalgic itch. Aside from pushing your way up through the online leaderboards, there is no actual reason to keep playing, but with each game over quickly (even if you’re really good, you’re only looking at a couple of minutes per game), there is no need for the game to offer more than this; its focus is its strength, and at a time where we’re seeing too many mobile game developers try and do too much (putting the audience off in the process), it’s refreshing to see Hipster Whale exercise restraint. 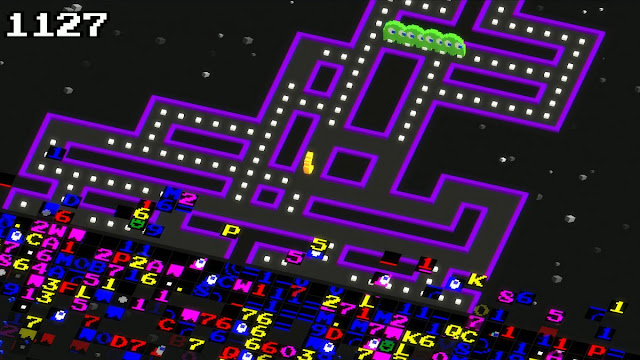 As with Crossy Road, Pac-Man 256 is a remarkably generous game for a modern take on the arcade coin-guzzler model. The base game is completely free to play as much as you’d like. As you play on you’ll earn special abilities that can be used to help you get a better score by pulling stunts like freezing the ghosts on the screen for a time. Using these abilities you get a limited number of plays (or “credits”), and once they have run out you can either opt to wait ten minutes or so to get a credit back. Or you can spend money on a couple of credits, or $Aus10 for unlimited credits. These powerups that you use credits to access can be upgraded with coins that can be acquired while playing, and the only other microtransaction that I even noticed was a $Aus6.50 one to double the value of coins that I acquired and make levelling up the special abilities more quickly.

That $6.50 microtransaction is a bit pointless, since you can play very deep into the game and earn very high scores without levelling up abilities, but after a day’s play I was happy to pay $10 for unlimited credits. That wasn’t even because I wanted to make my progress through the game quicker, because there is always the item-free version of the game that doesn’t feature items. No. I wanted to pay that tiny microtransaction because almost instantly I was struck with the raw quality of Pac-Man 256 and I simply wanted to support it. Namco Bandai was very smart to entrust its classic character and brand to this tiny team of Aussie mobile developers.