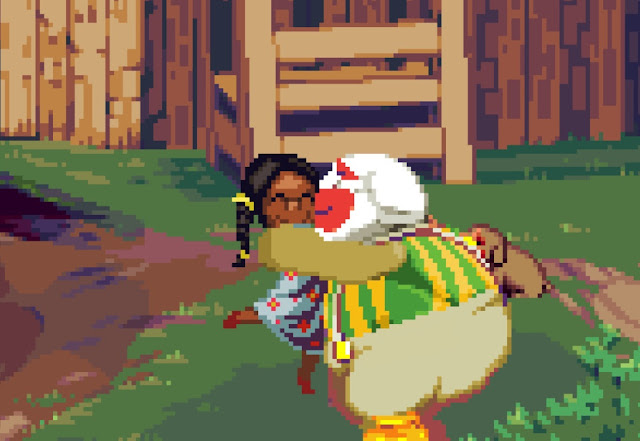 Devolver Digital’s games never cease to amaze me. From the perfectly casual (and yet, insanely difficult and hardcore) Luftrausers to the controversial Hotline Miami games to this year’s majestic The Talos Principle, I’ve been in constant awe of the publisher’s seemingly uncanny talent to pick and release only the best indie games they know people will play and enjoy for a long time.

Devolver’s repertoire is just impressive, and it doesn’t hurt that it also occasionally publishes a game that pushes towards AAA games territory too, such as the Shadow Warrior remake the Serious Sam games. Dropsy is one of the several upcoming games that, when fully released, will inevitably add another plus to Devolver Digital’s long and colourful banner of sweet indie games.

Developed by Jay Tholen and A Jolly Corpse, Dropsy is a point and click open world adventure game filled with surreal and disturbing images. And clowns. The game’s retro-style pixel-art graphics hearken back to the early LucasArts games, and the not-so-light story is evidently inspired by some of the more darker titles of the 90’s. It’s also filled with that uneasy atmosphere that’s usually reserved for true horror games, like Alien Isolation and Penumbra: you know, the uncomfortable and nasty feeling that you get with every step that you’re about to stumble upon something obscene or going to witness a very violent and disturbing act of aggressiveness. 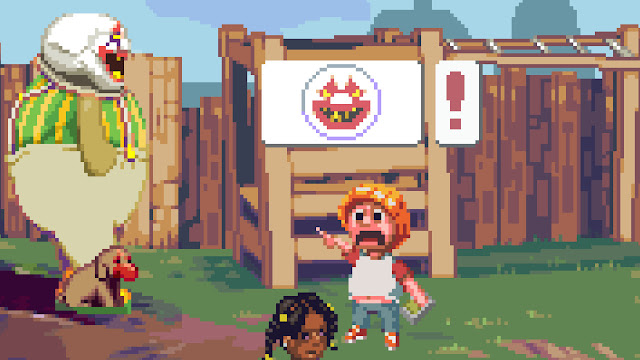 The sickeningly contrasting colour palettes, the creepy design of Dropsy the Clown, and the alien gibberish in which the characters communicate with each other, all only further reinforce that uneasy feeling and amplify the heavy, so-solid-you-can-taste-it dread that’s all around and over you. I’ve never felt so uneasy while playing a game, and that is ironic since Dropsy is supposed to be about a clown giving out free hugs and putting a smile on people’s faces.

Actually, I did not make that up. And I’m not so sure whether that’s the primary objective of the game. I did a little snooping around and learned that the actual story of Dropsy is that the titular clown’s family circus gets burned down and he is turned into an outcast. Now he has to solve puzzles, interact with people and occasionally hug the depressed person or animal (yes, you read that right) to uncover the truth behind the fire and subsequently clear his name. If none of that made any sense to you, you’re not alone in this, as Dropsy is still under development and this is a preview of a beta version. I’m sure the finished product will be a solid example of a modern point and click surreal adventure and perhaps rectify some of the odd glitches and hiccups. For example, anytime I make Dropsy wear the chicken headgear, the game freezes for about 10 seconds. Another problem I ran into at-least twice in which Dropsy failed to interpret my intended command and instead picked up his puppy. Which, amusing or creepy as it might be (depending on your perspective), is not always the most useful action to take.

Speaking of which, following Dropsy in his weird and offbeat adventure is his faithful puppy. There’s an option to play as him, but so far he has proved to be useless. He can’t interact with anything or anyone and cannot seem to exit a screen on his own accord. I’m sure the finished version might extend his movements to beyond sniffing and following the main characters around, but for now it’s just another tease of what Dropsy, the completed game, might be capable of. 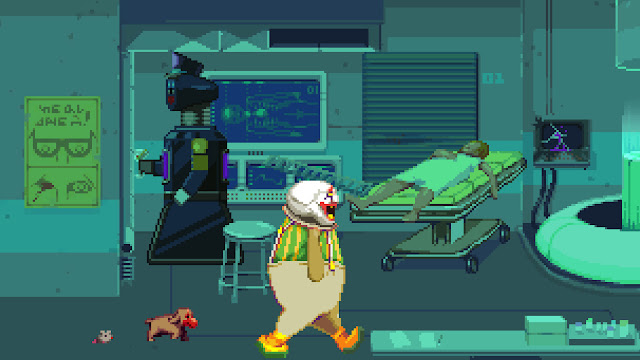 The title of the game is no mere coincidence. Dropsy is an old-fashioned term for oedema, an abnormal bodily condition. Without going into too much clinical details, symptoms of oedema include, but not limited to: sponge-like limbs, expansion of legs, and limited movements. Dropsy the Clown clearly shows quite a few symptoms of the disorder that he’s named after, and after doing some research I’ve come to this conclusion that our seemingly cheerful clown might be Grade ++ or even Grade +++ on the edema scale. Although the character may appear quite normal in appearance, his wiggly, abnormal arms are clear giveaways.

While it’s still got a ways to go, for now everything about Dropsy has my rapt attention: the disturbing imagery, the violent and uneasy atmosphere, the unconventional title, the eerie music… everything. I for one absolutely cannot wait to find out more about this clown and the dark, sinister secrets he uncovers. But don’t play it if you don’t like clowns. I can tell your right now that won’t be your game.