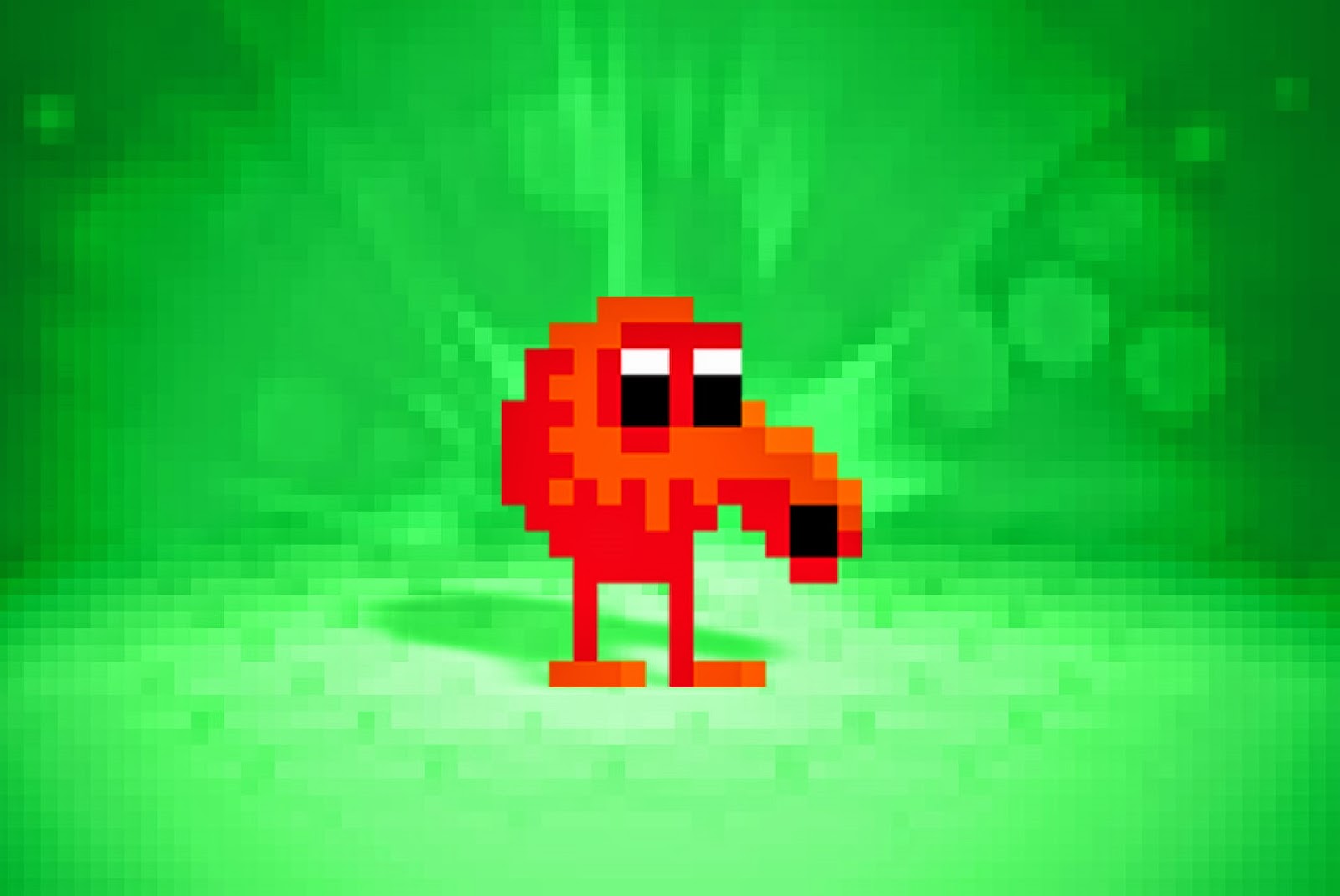 I realise that Q*Bert is not quite the iconic character from the old era of arcade games like Pac-Man or the Space Invaders are. But he deserves more respect than Q*Bert Rebooted, because this game is an embarrassment.

I grew up with Q*Bert, and actually wore out my Game Boy cartridge version of the game. As simple as its structure was, bouncing around a level made of boxes with a single minded determination to land on them, thereby colouring them in, it was an addictive formula. This is especially true when you considered the surprisingly wide range of enemies that would force you to adopt a new approach and strategy with almost every new level. In terms of sheer variety, Q*Bert was in many ways ahead of its contemporaries.

And Q*Bert himself was an appealing character, despite having an odd design and a nose that made no sense. Every time he lost a life to an enemy, he would utter a cute little @&$&!? swear, and in the mind of childhood me that would make me chuckle. And, while the franchise has declined over the years in popularity, there is still the occasional attempt to do it justice, as we saw with a PlayStation 3 release a few years ago that featured online leaderboards, which naturally brought out the competitor in me and other fans of the little critter the world over. 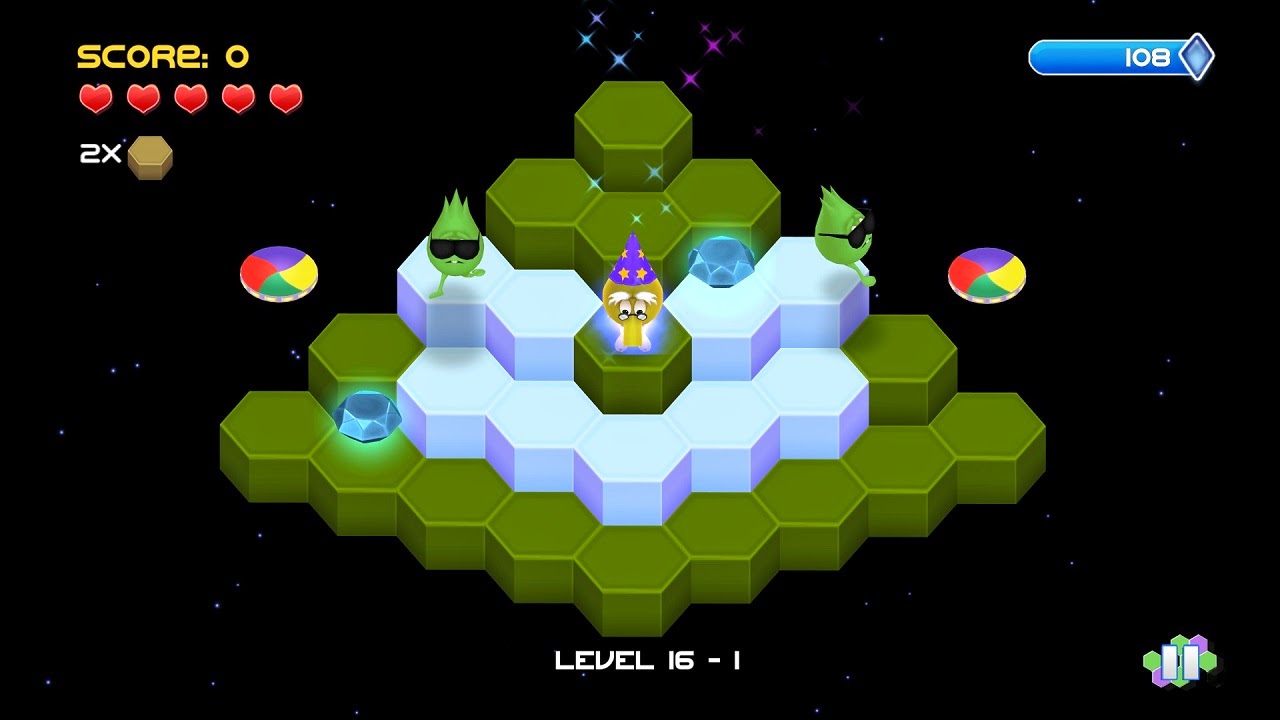 But just as Pac-Man and Space Invaders have been ‘reimagined’ for a modern audience by adding in faster and more furious action, now a developer has attempted to do the same with Q*Bert. The result is tragic. Taking clear inspiration from mobile gaming, this new Q*Bert is all about completing a couple of objectives in levels to earn stars, and then collecting gems along the way to unlock additional characters. To help facilitate speed, each level is broken down into a handful of tiny ‘stages’, and after the final stage stars are awarded and then it’s on to the next set of stages. This is no longer an arcade game and scores don’t count (other than earning a minimum score to be awarded a star from a set of levels), so the reward payoff is instead meant to be simply reaching the next set of stages.

Because stages are so tiny however, much of the challenge that marked the original game is lost. Q*Bert was structured around sustained challenge, where players would need to carefully conserve the spinning discs on the side of each stage, because they were the only way to escape some enemies. With large stages, however, there wasn’t enough discs to use at the first sign of danger, so players needed to instead rely on raw skill to escape enemies. It was done to artificially increase the game’s difficulty level of course, and con players into feeding the arcade cabinets more coins, but it worked. As with the best arcade games there was always the sense that with just a little more practice you would earn a new high score, and there was a real sense of achievement to beating your best score.

But in the new Q*Bert, though levels do become more difficult, it’s always only a few short stages away from making the next level and permanent progress through the game.. You’re not forced back to the start of the game if all the little guys lose their lives, just the start of the level, and a generous number of lives and spinning discs in each level means that complete failure is always unlikely, even if you only earn one star from the level. So, instead of relying on skill, Q*Bert Reboot is a game of grinding, and it’s an uninspiring slog at the best of times. 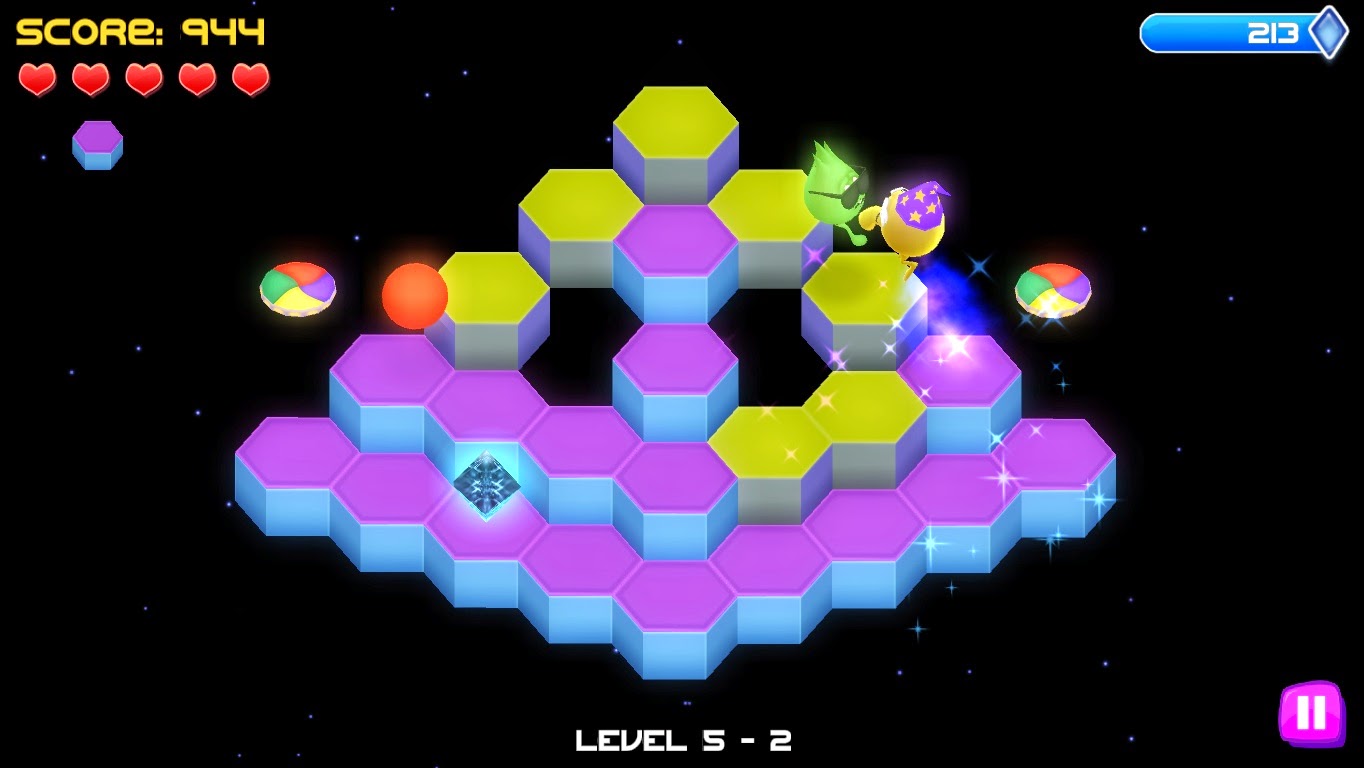 It doesn’t help that the game is the ugliest, most personality-deficient thing I have witnessed in years. The character models look like the kind of art assets that you’re given for tutorials in Unity or Game Maker. They are barely animated, too, rather sliding about the place like those old flash games moved. The developer has quite literally ruined the character in the game. I didn’t even laugh at Q*Bert’s swears.

But the greatest insult of all is the retro mode that has been thrown in. Classic Q*Bert remains as utterly entertaining as ever, but the fact the developer couldn’t put the effort in to include a leaderboard (even a local leaderboard) is beyond offensive. The best part of this game is actually the worst version of Q*Bert in many years.

Nothing redeems this game. It’s ugly as sin, it fails to understand what made the original classic compelling and though it includes the original classic, it is a neutered version of it. I love Q*Bert. I downloaded this thing without a second thought. I am angry at the injustice that has been inflicted on the cute lil guy.

You wouldn’t like me when I’m angry etc etc. Review score smash.