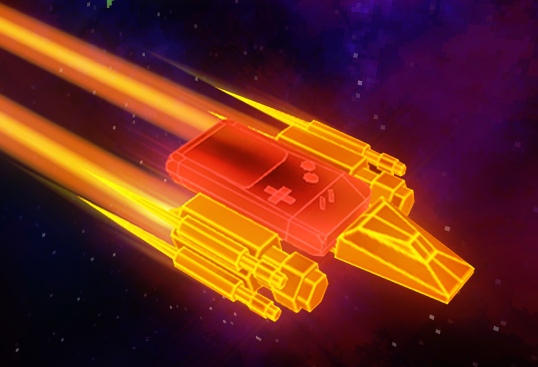 Spectra is a great throwback to the yesteryear of twitch racing games. Everything about the game rings solid, yet almost nothing gives the impression of spectacular. The end result is a fun game that will entertain in small doses, but does not provide enough depth to keep me coming back for more.

When I first fired up Spectra, it made a very good impression on me. The chiptune music is immediately catchy as the beats thumped out to create an auditory heartbeat for the game. More than just pleasing to the ear, the soundtrack is used as the foundation to generate procedural levels. This means that race track one will be similar in structure and difficulty each time you race it, but it will not be identical. This assures that Spectra will be about reflexes and not memorisation.

The visuals that accompany the music are more hit than miss, but there are elements of both. I actually dug the simplistic, neon drenched styling of the tracks. Shades of blue and purple create tracks that are vaguely reminiscent of Mario Kart Rainbow Road tracks are enhanced by the stars moving around in the background. The miss comes from a lack of visual variety. Even if the tracks had come in more colours and the backdrops included more than those stars (planets, moons, comets, asteroids – a bit of visual flair), it would have made a significant difference. Because of the sameness of the visuals throughout, the music becomes the only feature that truly distinguishes one level to another. 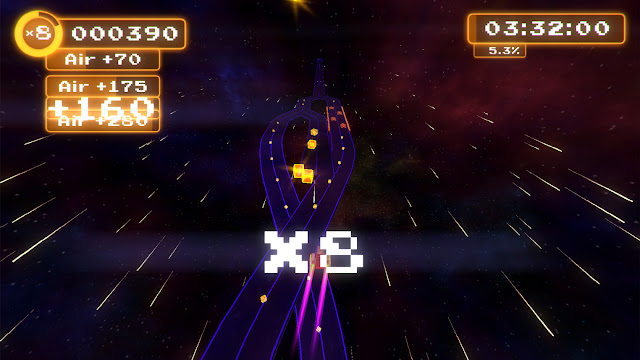 The controls are immediately accessible as the only thing you have to do is steer your ship, swaying it left and right to avoid obstacles and pick up points. There is an element of earning points through stunts that adds some addition risk/reward to the action as well. Fall off of the track and you have just a moment to recover and slip back on. Successfully doing so earns you some airtime bonus points. Failure to stay on the track results into your car plummeting into space and bringing the race to an end.

There are also quite a few barriers on the track. Ideally you want to avoid these. Hitting them destroys the barriers, docking points from your score. The impact also has the potential to knock you off of the track, and since this is a procedurally generate game, those barriers are not in the same place each time. However, sliding really close to a barrier can earn you some trick point bonuses. Tracks have a couple of other tricks as well, such as large jumps where the track disappears completely, giving you some serious hang time in open space. Additionally there are speed boosts that you can chain together for additional points – but at the cost of control, which increases your risk of falling off of the track.

All of these elements are well and good, and they make it easy to get into Spectra right out of the gates. The game controls really well – which is a must for a title like this. It only took a couple of tries to really get a feel for the floating race controls and on my third attempt I beat the first track. You are also rated on your score from zero to three stars. Getting a star or better on a track unlocks the next track (there are ten in total). You can then unlock hardcore versions of each level, essentially making for twenty total levels. 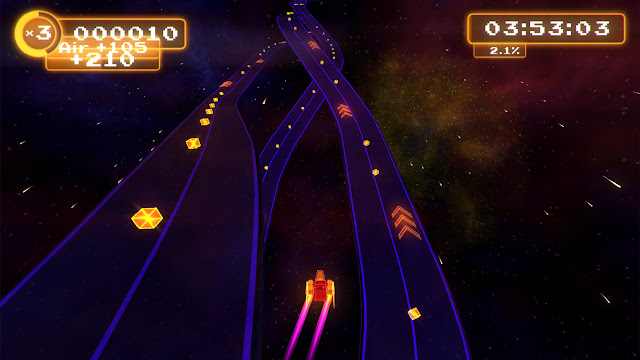 Spectra was easy to get into, and I played through all ten tracks in a sitting. This was in the span of about an hour or so. For those inclined to beat their prior best scores, there is ample reason to come back. However, despite the accessibility to Spectra, I found myself wishing there was just more to it. With so little to actually do other than swing back and forth, and no unlockables beyond the tracks and a lack of variety in the visuals between levels, Spectra was also an easy game to put down. Subsequent playthroughs prove that it remains easy to pick up again and have fun with, but only in short doses. This is the sort of format that would actually work better on the PlayStation Vita or Nintendo 3DS.

Spectra reminds me a great deal of Audiosurf, which is meant to be high praise as I have spent a lot of hours with both games in that franchise. However, while the soundtrack provided in Spectra is an excellent one, the inability to import more music of your own choosing and the lack of visual variety in the levels makes this title quite inferior.