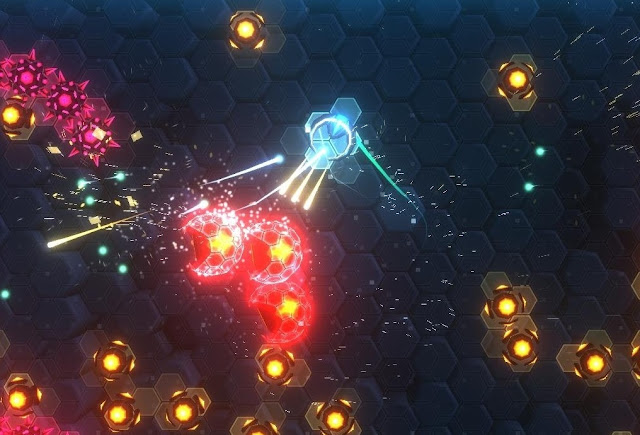 Given the popularity of dual stick arcade games like Geometry Wars and Super Stardust, it makes a lot of sense that we would see more twin stick shooters being made by indie developers. The genre is known for being accessible to a wide variety of gamers, yet also maddeningly difficult at times as it provides plenty of challenge. Tachyon Project feels like a natural evolution of the genre, and while calling it a Geometry Wars clone would be easy given their similarities, it would also be selling this new title short.

I loved what Geometry Wars 3: Dimensions brought to the table. The way it opened up the playing field was a breath of fresh air that the twin stick shooter genre was desperately in need of. At first I was concerned that Tachyon Project would prove to be a step back as I drifted around my first bordered level. The confines felt too restrictive, but I soon understood the purpose to the design and realised the nuance it would bring to the table.

Tachyon Project gets credit for trying to put together a storyline around its core game. The tale is a fairly simple one that spans ten stages. You assume the role of Ada, an AI that a couple of hackers turned loose on an unsuspecting network system. However, the hackers who created Ada are soon arrested and Ada is left all alone in the virtual world without her parents. While the story never really elevates itself as anything memorable, it does set the stage for Ada’s journey to try and figure out what happened to them by hacking into increasingly more sophisticated networks. 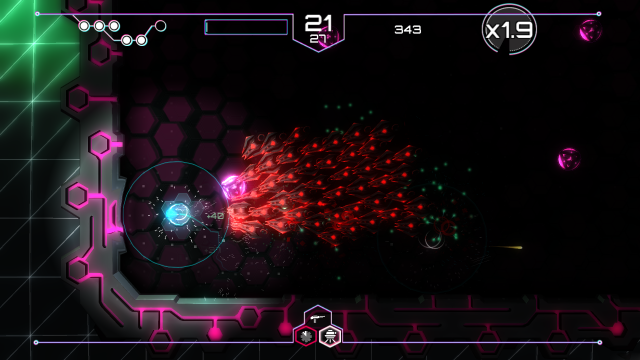 This story serves as the backdrop against which Tachyon Project’s action plays out. Enemies are defence mechanisms who are doing their job in attempting to eliminate the threat that is Ada. Things start off predictably enough as you navigate Ada around the first few enemy waves. The enemies work in similar patterns to other similar titles, either attempting to hone right in on Ada’s location or just moving in a mass entity that tries to overwhelm with sheer numbers.

However, the enemy design really begins to distinguish itself after a couple of stages. Mines begin to do more elaborate things, such a extending deadly needles. Enemies with hard front shells that move slowly lumber towards Ada, encouraging you to swing her around from behind to shoot at their more vulnerable sides. Some levels play out in fully lit, bright splashes of colour, while others are somewhat muted and considered ‘stealth’ levels – where the stages are often cloaked in darkness that might allow enemies to sneak up on Ada.

The enemy roster is an impressive thing, with incredible variety between the units. The walls, that initially felt so limiting were my friends early on. I managed to get through the first few levels or so by turtling in the lower left corner. If ships could not attack me from behind, it would be easier to manage the waves I reasoned. However, enemies began to come in new, deadly varieties. Some would hug the walls and launch themselves at high speeds from both the side and the top at the same time. Others would zip at Ada’s location with hard shells that were nearly indestructible – but once they hit the wall they seemed ‘dazed’ for a moment and left themselves open to easy counter attack. These enemies and more forced me out of my comfort zones. 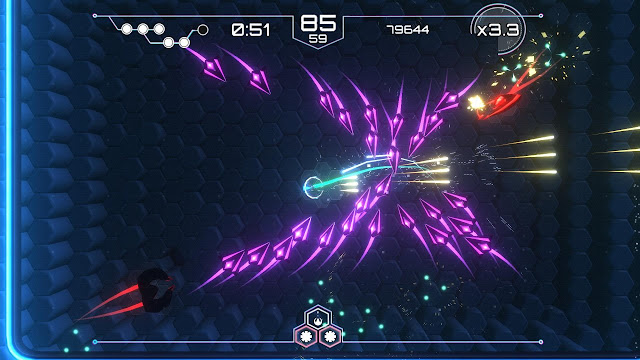 Waves come with a variety of objectives, ranging from killing a set number of specific enemy types, to surviving for a duration of time to simply racking up a certain number of enemy kills regardless of type. Some boss fights get sprinkled in as well, and each of them is maddening at first. One might play out like a typical shooter, with protective rings that protect a vulnerable centre. Another might create a minefield with moving walls that can do Ada in with just a couple of hits.

Ada is far from powerless however, as she not only has a standard shooter, but through completing levels in the storyline can unlock additional weapons, perks and secondary attacks. Primary weapons might range from shotgun spread, to more narrowly focused lasers and everything in between. Perks might include more health, homing functionality on shots fired and greater speed. Secondary abilities can include things such as shields and a radiating explosive around Ada that damages everything in her proximity. Each stage you can customise Ada to use the combination of unlockables as you see fit, with many of the Xbox Achievements tied to killing specific numbers of enemies with a particular weapon.

The variety in weapons and enemies certainly keeps the gameplay feeling fresh, but none of it would matter if Ada handled poorly. She does have a unique aspect to her gameplay, which is the recoil she suffers from firing a shot. It is a small thing, but one to take note of – especially if you are trying to carefully navigate her through a throng of enemies. Admittedly, this was one of the reasons I hung to the corner at first as well, because the recoil really did not cause me to move – but in later stages you simply have to in order to be successful. The life system is also unique in that it is tied to a timer when you start the stage. Killing an enemy adds to the timer, using your secondary weapon chips a small amount off of the time and getting struck forces the timer to decline by a more substantial amount. Of course, this being a timer, it is continually counting down as well, and should it ever reach zero, the match is over. There were several times I noticed my timer dwindling to the teens, and I got desperate and threw myself into a swarm of enemies and launched a proximity bomb in hopes that the carnage would buy me enough time to recover. Sometimes the strategy worked, and at other times it failed, but it was always exciting. 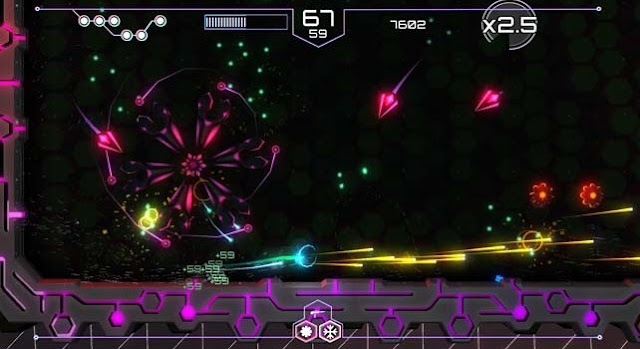 Tachyon Project does not reinvent the wheel for twin stick shooters, but it does add some creative new tread that allows it to feel familiar yet fresh at the same time. There are plenty of modes, challenges and customisations to try out, so fans of the genre should have plenty to keep them busy throughout their time with it.