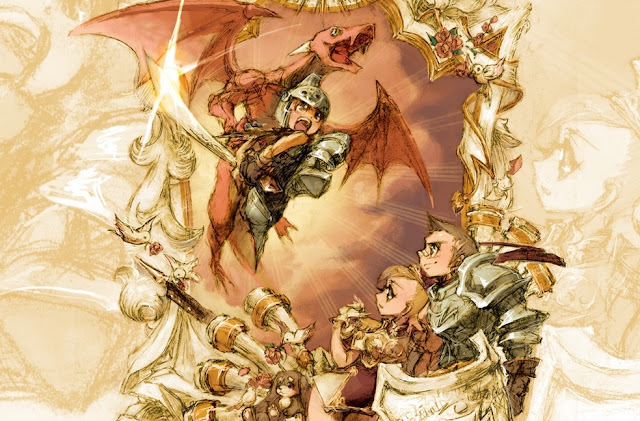 How many 2D fighters have we played this year?

Battle Fantasia is a somewhat simplistic approach to a 2D fighting game and clearly looks to similar games as inspiration. Like multiple games before it, Battle Fantasia offers a diverse range of characters that all have different fighting styles, with no two characters being a clone of another, so for all the sameness to the game there is at least a lot of ambition where it counts.

As you would have been able to predict arcade is one of the staple modes present, in addition to a time attack mode which focuses on finishing the arcade as quickly as possible, survival mode which sees you trying to beat as many foes as possible, with your health carrying over between each match, and a story mode, which is essentially arcade mode with a lot of text in between matches. Text that is completely pointless. In that story mode one of the justifications that set up a fight was one character asking where someone else had gone. It’s ridiculously absurd and honestly, unless you really care about unlocking stuff in the gallery you may as well stick to the arcade mode for your fighting game fix. We’ve seen in other fighting games, such as Persona 4 Arena and Blazblue that it is possible to have a fighting game with a good narrative, so there’s no excuse for Battle Fantasia’s story mode any longer. 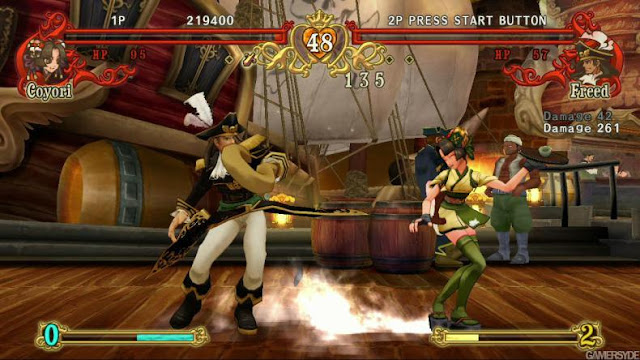 Controlling characters is a fairly standard affair too. There is a light and heavy alternative to punches and kicks, with a button used for grabbing opponents too. While the keyboard works, there is no substation for having an Xbox 360 controller. It really is the best standard for fighting games short of going all the way and getting yourself an arcade stick. Yet while the controls are responsive, Battle Fantasia suffers from floaty physics. Jumps take too long to land, and it’s hard to feel like the movements you’re inputting are having a real effect on your characters. Some attacks feel weak, and it’s only the special moves that feel like they hit hard.

And while there has been a big push to come up with something that will appeal to all fighting game fans, in doing so Battle Fantasia has developed some flaws that might let the aforementioned fans down. By focusing on combining ground, aerial and projective fighting styles many characters have combos that can be chained together, to allow the player to attack the opponent without giving them the chance to block or defend. This is poorly balanced and allows attack spamming that makes certain characters are popular online. This makes the online matches dull over the long term, which is disappointing since the netcode is quite smooth. Even when I was reporting a high ping rate (it’s Australia, it happens), I found the game to run smoothly and without noticeable input lag. But in addition to the disappointment of having to deal with spammers, it’s hard to get a match going. At the time of review, there were very few people online to play against at any time.

Battle Fantasia has some ambition. Character variety is strong, and one or two characters are designed in such a way that spam attacks don’t immediately overcome strategy, and are both fun to play with and against as a consequence. But there are too many negatives to encourage a purchase over other quality fighting games available now. The price might be whats appealing, but with a very small player pool, and inferior gameplay, it really is a case of getting what you paid for.