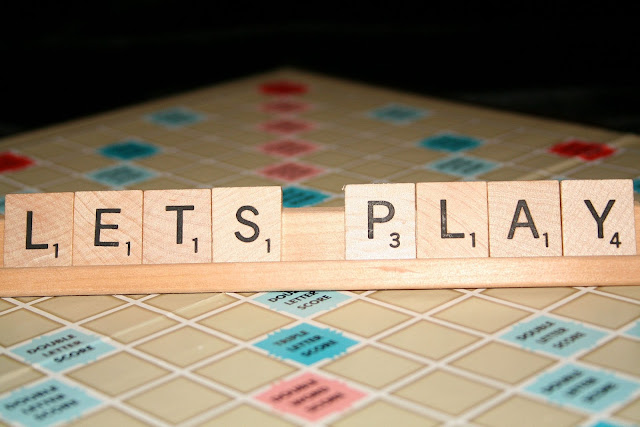 I love board games, from classics such as Monopoly and Risk to newer ones that release each and every year. Of the older games out there, Scrabble ranks among one of my favourites. It probably comes as no surprise that I enjoy writing and I like to think that my vocabulary is at least decent. Playing Scrabble against an AI opponent reminds me how much further I have to go.

Related reading: For a brilliant example of a modern board game on iOS, check out Ticket to Ride.

For those unfamiliar with the game itself, Scrabble plays out on a board that has some scattered bonus squares that have double and triple letter and word multipliers. Each player has a handful of tiles that they are given at random as well. Each tile has one letter on it with a point value. Common tiles like S, E and A are worth one, while slightly less common such as G and D have a score value of 2 and really zany letters like Z can be worth 8.

The idea is to use the letters in your hand to spell out words on the board in front of you. Most of the time players are spelling out common words that might have middling point values, but if they can cleverly put a high value letter on a bonus multiplier, those scores can quickly sky rocket. While longer words certainly give you more points, cleverly placement of a word with high value letters is often the key to success. There are two other strategies worth noting. 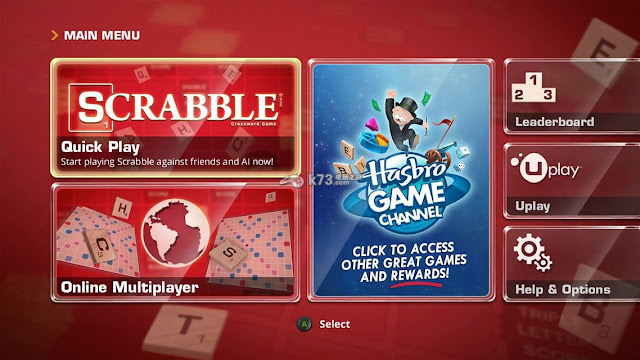 The first is how far in a particular direction to build out your words. Spread out a word too far, and you might make it easier for your opponent to land on the coveted triple word scores at the far bounds of the board. Also, as you choose higher difficulty AI opponents, you will see the computer often running words in parallel to yours. It is far easier to run perpendicular and create “T” shaped patterns on the board where only one letter intersects. Running two words side by side gives you credit for spelling multiple words right in a single turn, often leading to some insane point bonuses.

The video game version of Scrabble comes with its perks but also its drawbacks. The most obvious drawback is simply moving pieces around on the game board. I have also played Scrabble on the iPad, and the ability to drag and drop your pieces where you want them is by far the simplest way to input your words. It is a more natural feeling than using a controller. Not that the controller necessarily handles poorly. I think the team at Ubisoft has done a good job managing it as an input device, but there are some quirks in the behaviour such as pressing ‘B’ removes your last letter. Frustrating if you just wanted to remove or change out the second or third letter in a long word, but you have to reverse the stack in exactly the order it was put down. I really do not see a better way of doing this, so that control issue is easily forgiven.

The control behaviour I have more issue with is how the tiles glide over the board. If a spot on the board is occupied, the tile you are hovering over it jumps to the next unoccupied tile. This is meant to speed things up and serve as a convenience, but it can lead to some awkward handling if you try to place a tile to a specific place but accidentally overshoot and wind up skipping over several words. This is more of an issue near the edges of the board, where a handful of words bunched together might actually prevent you from moving to the space you want because of the board’s boundary. Then you have to scroll to a whole different place and then leapfrog over the cluster to reach your destination. I would have preferred that Scrabble simply let you hover over whatever spot on the board you wanted. 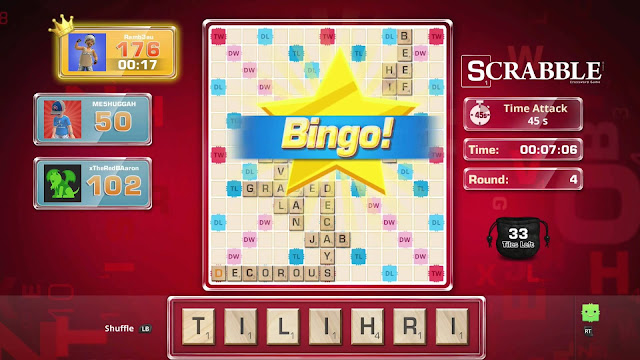 However, aside from these input quibbles, the rest of the Scrabble lends itself to the digital platform quite nicely. The biggest advantage is the built-in dictionary. No having to look something up every six words to make sure that someone is not just making something up or spelling it incorrectly. Additionally, you can play online or against computer opponents of varying difficulty. Having opponents always at the ready means that you can play any time you like. The real board game naturally requires actual opponents be handy. One other great feature to an electronic version of the game is the ability to put time limits on turns and matches. This keeps the pace brisk and saves anyone from having to actually be the official time keeper.

I like the integration with the Hasbro suite of online games, but I do think the music is too limiting out of the gates. You can earn and spend points to unlock new soundtracks through U-Play and the Hasbro hub, but until you do there is only a single choice of music to be heard. Certainly it is nice having any kind of music – something that a board game in and of itself does not provide – but these gates to the music struck me as a peculiar hook to keep players coming back for more. The music you start with is pleasant enough, and I realise that a game like this is not hanging its hat on graphics and sound. I am all for unlockable content, but this one seems pretty superfluous to me.

Related reading: Another must-play digital board game is Fortune Street, available on iOS.

Scrabble is a great brain teaser for people who like word games. The AI difficulties create a playing field to suit just about anyone’s level of expertise. Very easy should amount to a win for most people, as the AI puts together strings of three and four letter words with no real concern about point multipliers. The very hard opponents will stack long words in parallel to yours and hit several multipliers at once, racking up points at a breakneck pace. The ability to have two to four players as well as online and local multiplayer rounds out a package that brings very few bells and whistles to the classic game of Scrabble.

Project CARS cancelled for Wii U, but gets new DLC for all other platforms