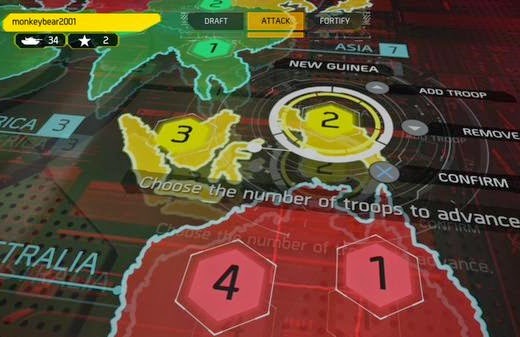 After the first competent, but otherwise unremarkable take on Monopoly, Ubisoft has continued its new partnership with Hasbro with a new edition of Risk. This classic strategy board game is arguably a more timeless formula than the one about making money, but it is still a game that has aged, and Risk is no longer especially relevant either as board game or video game.

With that being said, Ubisoft has done a good job in taking the basic game and giving it a sheen that makes it as dynamic and visually engaging as possible. Presenting the board as a futuristic war map, you’ll be watching little holographic tanks and planes fighting it out, with each player’s territories coloured for easy reference. It’s possible to speed up the combat animations (which become repetitive and slow down the pace of the game quickly), and the size of your force in any given territory is represented as a simple number, but the interface is clean, pleasant, and easy to understand at a glance. In other words, it ticks the most important boxes.
There’s both local and online multiplayer, as well as a couple of  different AI settings for single player action. These AI settings don’t scale with difficulty, but rather represent a defensive, aggressive and balanced mindset. However, the nature of Risk means there is minimal value in being defensive, so the difficulty of the AI can be assessed down those lines (with aggressive AI being the most challenging). 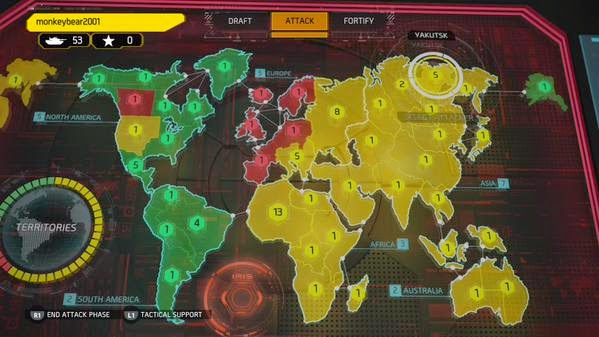 From there anyone who has played Risk knows what to do – capture territories and then those territories will provide additional reinforcements, which can be used to capture more territories. The main goal is the secure entire continents, because doing so provides even more soldiers to the cause, and the size of these continents represents the difficulty in capturing them and thus the rewards for doing so. Conquering Asia, for example, is a mammoth task and results in hordes of additional soldiers. Australia and South America are small regions with only a few territories to capture, but only provide a few additional soldiers each turn.

Related reading: The iPad is the home of digital board games now, and one must-play example of this is Ticket To Ride.

But if you haven’t played Risk before, then here’s some free advice: capture Australia first. Once you’ve dominated the continent there’s only one way to attack it (through South East Asia), making it very easy to defend, and those couple of bonus soldiers quickly become a major resource advantage. He who captures Australia early in a game of Risk becomes the odds-on favourite to win the game. So says the wisdom of Matt.
Combat itself is incredibly simple. Pick a territory to attack and then roll one dice for each soldier on that territory. You roll one fewer dice than there are soldiers on the territory (so one dice for two soldiers, two dice for three, etc), though there’s a cap of rolling three dice. Then the defender rolls one dice for each soldier defending the territory (one dice for one soldier, two dice for two) to a maximum of two dice. Whoever rolls higher wins, and kills off one soldier for each dice roll above his/ her opponents. So, sixes are good and ones are bad. 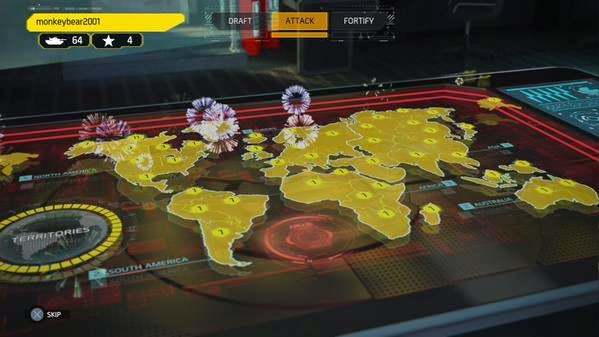 As with Monopoly this creates an instant problem that the game is never able to resolve – it’s almost entirely luck based. Yes, there is some light strategy involved in choosing which territories to attack, or when to place armies down to defend a region instead, but there is very little way to win from a weaker position other than to hope for a dice rolling miracle. I’m not a great fan of strategy games that are luck-orientated (give me board games like the classic War and Peace or Diplomacy and I’m a happy fellow), and so while I enjoy the experience of sitting around a table with friends rolling dice and having beers, and while Risk is an easy choice for a party game because it is so simple to learn, it’s not a board game that I would go out of my way to play.
Aside from the standard game there are some popular alternatives, such as the hidden mission (where you have a task to capture certain territories, but your opponents don’t know which), or Capital, where you’ve got a set territory that needs defending at all costs while you also try and capture your opponent’s territories. These are nice and help flesh out the base game, but it would have been really great to see Ubisoft go the extra distance to offer some different maps and gameplay modes to play through. Risk has grown beyond the standard game over the years, with popular variations such as Lord of the Rings Risk offering a fundamentally different experience thanks to the different map designs and scenario-specific rules. I can think of a couple of Ubisoft franchises that would be easy to rework into a Risk-style game (think Assassin’s Creed or Child of Light), and going to the effort to build these would have done wonders in helping Ubisoft put its unique stamp on the Hasbro license now that it has it.
So in the end Risk is a touch limited and is a digital version of a game that has aged badly, though this version of the’ game is more comprehensive than the Ubisoft Monopoly game. The PlayStation 4 isn’t exactly the home to board games (if you’re a board game fan and you don’t have an iPad, frankly, you’re doing it wrong), so it benefits from a lack of competition too. There is talent on display in how Risk has been developed, and I’d like to see Ubisoft take this expertise and consider building console versions of far more modern and relevant board games. Give us Agricola, or Puerto Rico, or one of the Fantasy Flight games, because it is really unfortunate that to the big publishers board games start and stop at Hasbro’s lineup, when the industry is doing so well precisely because it’s moved beyond Hasbro.