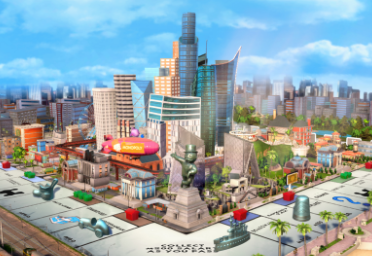 I think Ubisoft has done everything it can to accurately encapsulate Monopoly in digital form. Since picking up the license from EA earlier in the year Ubisoft has taken the opportunity to kickstart the new partnership with Hasbro by releasing a very down-the-line take on the classic board game, and it goes without saying that the value of this game is greatly dependent on how much of a fan of Monopoly you are.

In this package you get to play Monopoloy, either on a classic board, or alternatively a “living Monopoly” environment reminscient of the Monopoly Streets game from last console generation in which the background changes as you build up your properties. This visual skin in the living Monopoly mode doesn’t change the core game in any way, but it is very amusing the first couple of times to see Mayfair hotel building rivaling the elegance of the finest of 5-star hotels, only to round the corner and see a dodgy run-down motel sitting on Old Kent Road. 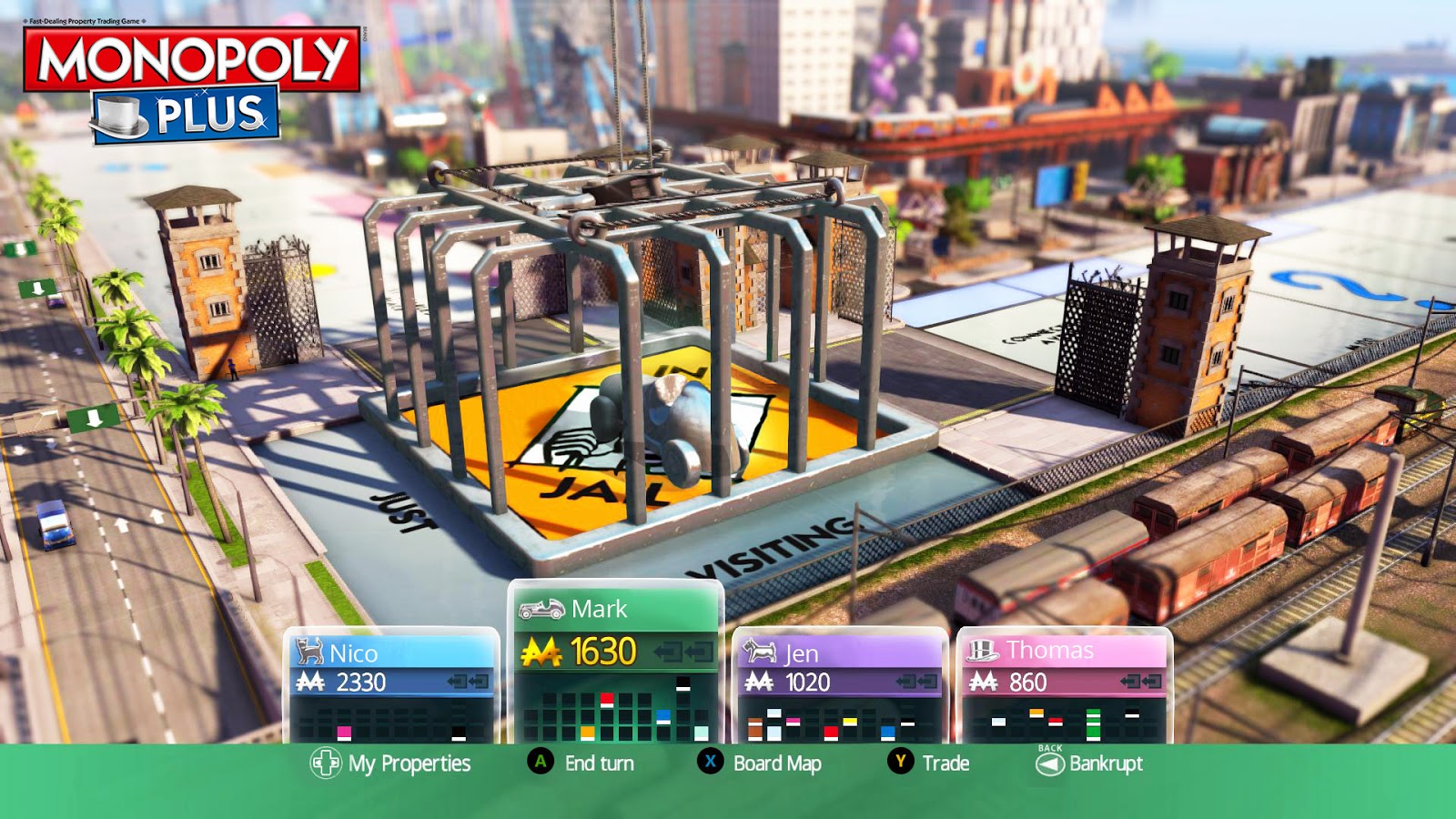 It’s also possible to set down a range of popular house rules (my personal favourite is the one where tax money goes into a kitty to go to the next person that lands of Free Parking). It’s also possible to play with a large number of friends (supporting up to six players through controller sharing), and you’re even able to create your own boards. That feature doesn’t let you do much more than rename properties, but it’s a nice touch for people that want to further personalise their experience.

Finally, there’s a version of Monopoly Deal in there too – a card game that is derived from the original board game, and requires players collect card sets that match the property sets of the board game by stealing cards from other players. It’s a simple enough card game, but unfortunately the focus there is on the online multiplayer and there isn’t exactly a large community for the game.

The rules work, the dice rolls are balanced to reflect probability properly, and the game is nicely animated. Regardless of whether you’re playing on a classic board or the living city, either way you’re in for a good looking game from an aesthetic point of view. In other words it is a good game of Monopoly. The problem is, it’s Monopoly. And that means its a classic game that is badly in need of modernisation. 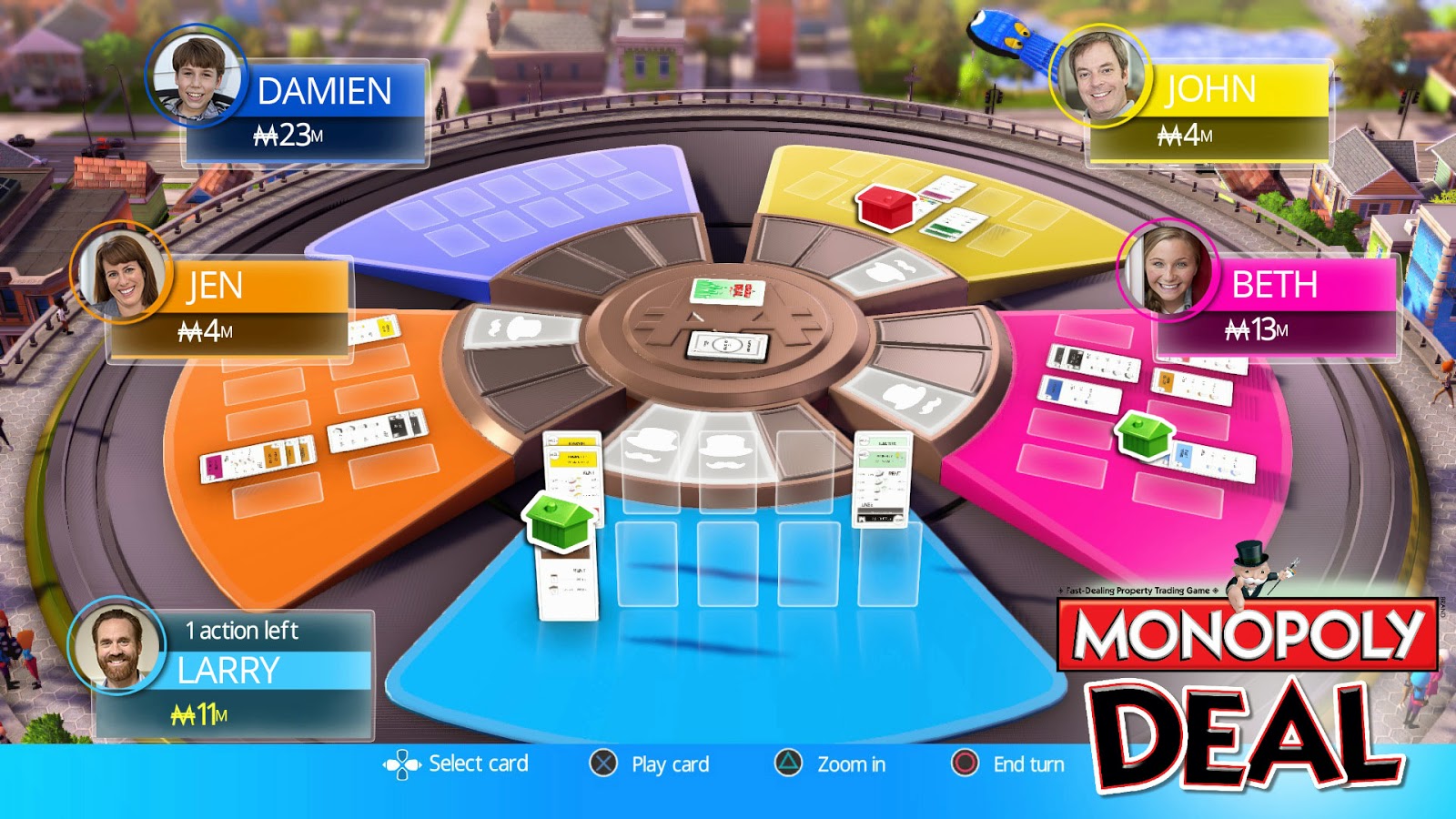 The core problem with Monopoly is that it is so heavily reliant on dice rolls at a time where the popular board games are finding creative ways to get rid of dice. The likes of Power Grid, Puerto Rico, Dominion and others that form the core of the Eurogame movement in board games has figured out that simple rules that require skill, rather than luck, are games that are ultimately better fun for competitive players. I can’t remember the last time I played a game of Monopoly with a group of people where one of them didn’t feel hard done by with bad dice rolls. The nature of Monopoly also means that someone who has a couple of lucky dice rolls early ends up in a strong position and can rarely (read: almost never) be pegged back.

When you start to feel like luck is determining the result of a game it’s difficult to really enjoy what you’re playing. There’s some joy to getting the dice to fall on your side, sure, but it’s a short term satisfaction, and as someone who has been closely involved in the board game world over the years, the only people that are really still buying Monopoly sets are for the limited editions for the things they love, and as collectibles rather than something to play. I have the James Bond Monopoly set that I’ll never use to play the game, for example. I got it as a gift because I’m a fan of Bond. I treasure it, but not because it’s a great game, by any stretch of the imagination.

It astounds me that the major games publishers; EA, Ubisoft and the like, continue to invest in these classic games (Ubisoft has Risk and Trivial Pursuit on the way too). Even as the iPad and Android tablet devices are inundated by talented studios producing digital versions of the most popular modern board games, from Catan to Agricola and Battlelore, the consoles are going largely without board games and, considering just how good consoles can be for getting the family around for an evening of gaming, it makes no sense to me that the major publishers are ignoring them in preference for the classics that, in reality, people who are inclined to play board games just aren’t that interested in any longer.

The Australian games industry in 2015; why consoles are the big opportunity