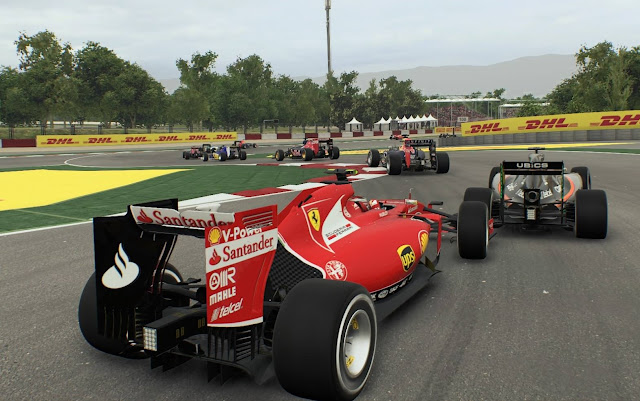 Formula 1 remains my favourite form of racing. There is something about the way the cars speed around the track that is elegant, graceful, and even beautiful. It’s fast and loud, sure, but it’s also a technical and has rules of behaviour on the track that are downright gentlemanly (even though they are there for safety more than anything else), and that gives it a distinctly different personality to other kinds of racing.

But F1 is a surprisingly difficult sport to do justice to in video games. In addition to capturing the complex physics inherent in a game that is all about ultra-light cars screaming around tight corners at high speeds, F1, as a competition, is an expansive one. There are more tracks and races in the typical F1 season than most other racing games would even dream of throwing at the player – 19 in the current season. And these tracks are now reflecting an increasingly varied range of racing conditions. There are plenty of traditional track races, sure, but there are also street races, like those that take place in Monaco and Singapore. The later is a night race. Abu Dhabi’s Grand Prix takes place in the afternoon, transitioning to night.

All these different racks and conditions, as well as the subtle differences between cars and their settings, makes for an enormously complex game in terms of the coding that needs to go into it. But these features aren’t necessarily appreciated; unless the game also looks on par with the other racing games and has the same depth of options, any F1 game is still going to struggle to stand out. This certainly affected last year’s F1 effort from Codemasters. But, thankfully, the developer took the opportunity presented by the new generation of hardware to take the series forward the step it needed to to compete with the likes of Project Cars. 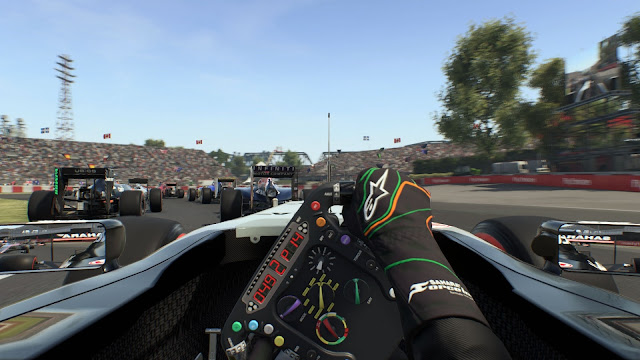 The core of F1 2015 is, of course, the championship, and Codemasters has designed to bravely focus the entire experience of the game around it. There are still time trials and single races, but in getting into this game, you’re expected to go the whole hog and play through each track across a whole season. From the menus and presentation, through to the race options themselves, there’s a minimalist approach to F1 2015 that is specifically designed to direct players towards the championship, and coming from the feature bloat of Project Cars, is almost refreshing in having a game focus its energy on a singular experience.

I absolutely love how the cars in F1 2015 handle. There is nothing quite like hitting the perfect racing line for the sharp corners on a track like Monaco, or perfectly timing the pass at the end of a long straight like in Shanghai. The various weather conditions all impact on the car as you’d expect them to (driving around during a thunderstorm really is a nightmare at times), and the racing is as unforgiving as you might expect the real sport to be – after going heavy on the pedal down a straight, mistiming the break or turn on the eventual corner punishes you severely. Spend a while playing this game and you’ll end up with an appreciation for what the real racers must experience, because trying to complete a full race with the full number of laps that are in a real F1 racing requires extreme concentration and becomes mentally fatiguing, and that’s when you’re sitting in comfort at home with a controller. The discipline and focus that the real racers must have is obscene.

There’s a significant improvement to the visual engine over last year’s game, and while it’s still not the most beautiful racing title out there, the improvements in the engine have allowed F1 2015 to offer a greater sensation of speed, and that is at core what a racing game engine should be about. It was only when I paused the game to try and take screenshots that the weak background environments became noticeable, but then after the disappointing rain effect that Project Cars threw at me – and as a fan of good rain effects in my games – I was pleasantly surprised at how nice the spray off the wheels looked when I was closing on the opponent in front of me in the middle of a thunderstorm. 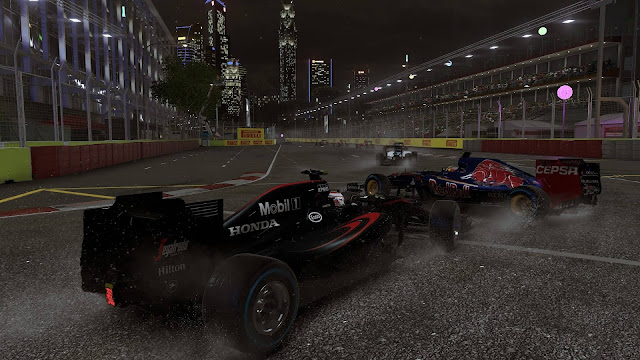 One area where the F1 series could still use work is in the AI engine. The opponent racers are competent and effective at punishing you when you make mistakes, and it can be difficult overtaking them given the strict rules that the F1 sport has on collisions and defensive manoeuvres, but at the same time they are incredibly robotic in both their strategy and racing style. With so little personality in the racing, the thrill in coming out on top starts to feel artificial, and ultimately hollow.

But then there will always be the thrill in shaving off hundredths of a second from the best lap times, and F1 2015 is remarkably effective in subtly digging its claws into you and convincing you that yes, with just a touch more practice and precision you could take that difficult corner a little better. With so many different tracks, each with their own personalities, mastering F1 2015 will keep you going until the inevitable release of F1 2016.

Criminal Girls 2 is a thing, but will it be released out west?