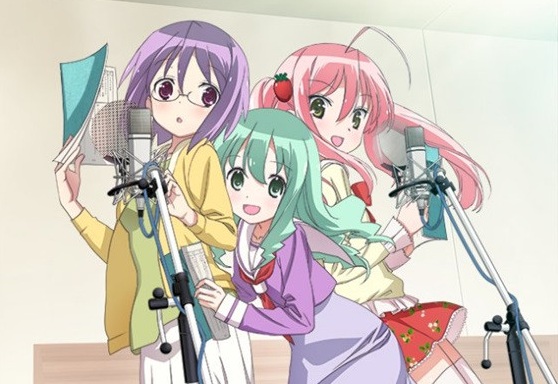 With the sheer volume and range of experiences the anime industry offers today, it’s easy to view animation studios as faceless entities or ones puppeteered by charismatic individuals. And yet, it regularly takes dozens upon dozens of bit players to bring even the nichest of productions to fruition. While animators slave away adapting quaint character sketches to iconic visages, voice actors breathe life into those virtual bodies with their performances. And boy, are there a ton of voices to go around in this business.
Alongside a barrage of comedy, Seiyu’s Life (Sore ga Seiyuu!) delivers an introspective glance of Japan’s voice acting industry. Perhaps it’s because the show richly covers just one humble facet of anime that it succeeds in driving home the human souls involved every step of the way. This is a show that romanticises not the beloved Gokus and Kiritos of the world but the role of “the dude in the back of the line who shouted something weird in that one episode”.
Futaba Ichinose serves as the show’s protagonist – an identifiably quirky upstart who practices voices by talking to her purple dog doll – and she’s wholly complementary to the show’s ambitions. Seiyu’s Life fittingly kicks off during her first day on the job and Ichinose pays her dues by introducing herself to literally everyone on staff before she can demonstrate her talents in the studio.
The ensuing studio scene sheds some serious light on the structure voice acting newcomers utilise, particularly as it relates to the myriad of minor roles. All the while, Ichinose stews over which voice and inflection to use for the character she’s been assigned. She winds up spinning her own fantasy for the sake of gags (and in keeping with her eccentric personality), but watching all her fragmented thoughts unfold reveals some fascinating insights. Ichinose also becomes a believable surrogate for the audience when nerves get the best of her on more than one occasion, encapsulating that tension associated with getting a first job. 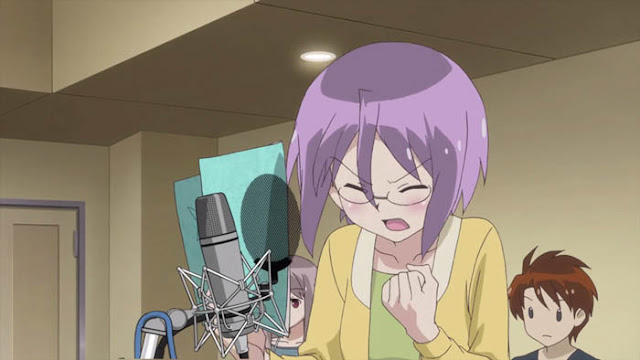 The series is effective so far in that it wastes zero time getting into the nitty gritty of the industry; characterisation takes a distant back seat. As the show is called Seiyu’s Life, though, I expect the slice of life elements will be further incorporated as the show goes on. We got out first glimpse of that with the revelation that Ichinose couldn’t find work after graduating so she decided to go big by pursing her dream.

Should that element fail to evolve, the show’s light-hearted, innocent humour should ensure even the most informative segments are worth a giggle or two. Ichinose’s aforementioned doll frequently rears its head during transitional scenes to either present background details to the audience or simply steer the narrative forward. These tidbits come off as organic and true to the show’s tone because the dog’s lines are thoughtfully integrated into punch lines and the like. Granted, any line delivered by a creepy purple dog is going to be inherently comedic, but there’s some legitimate craft to the odd fellow’s usage.
As an aside, watching anime characters voice other anime characters as a part of an anime isn’t half as jarring as you’d anticipate. It’s an issue blanketed by the usage of storyboards and early animation sketches to separate the drawings from the in-show universe, which is both authentic and mighty convenient.

Seiyu’s Life probably won’t be a hit with those hunting for shows with full-fledged comedy or story-driven character developments. Rather, this one’s hook lies in its voice acting performance scenes that bear a surprising amount of emotional intensity since they’re inextricably linked to a volatile, fledgling performer. Culturally significant stuff masquerading as cutesy fluff, Seiyu’s Life has a lot more going for it than meets the eye.