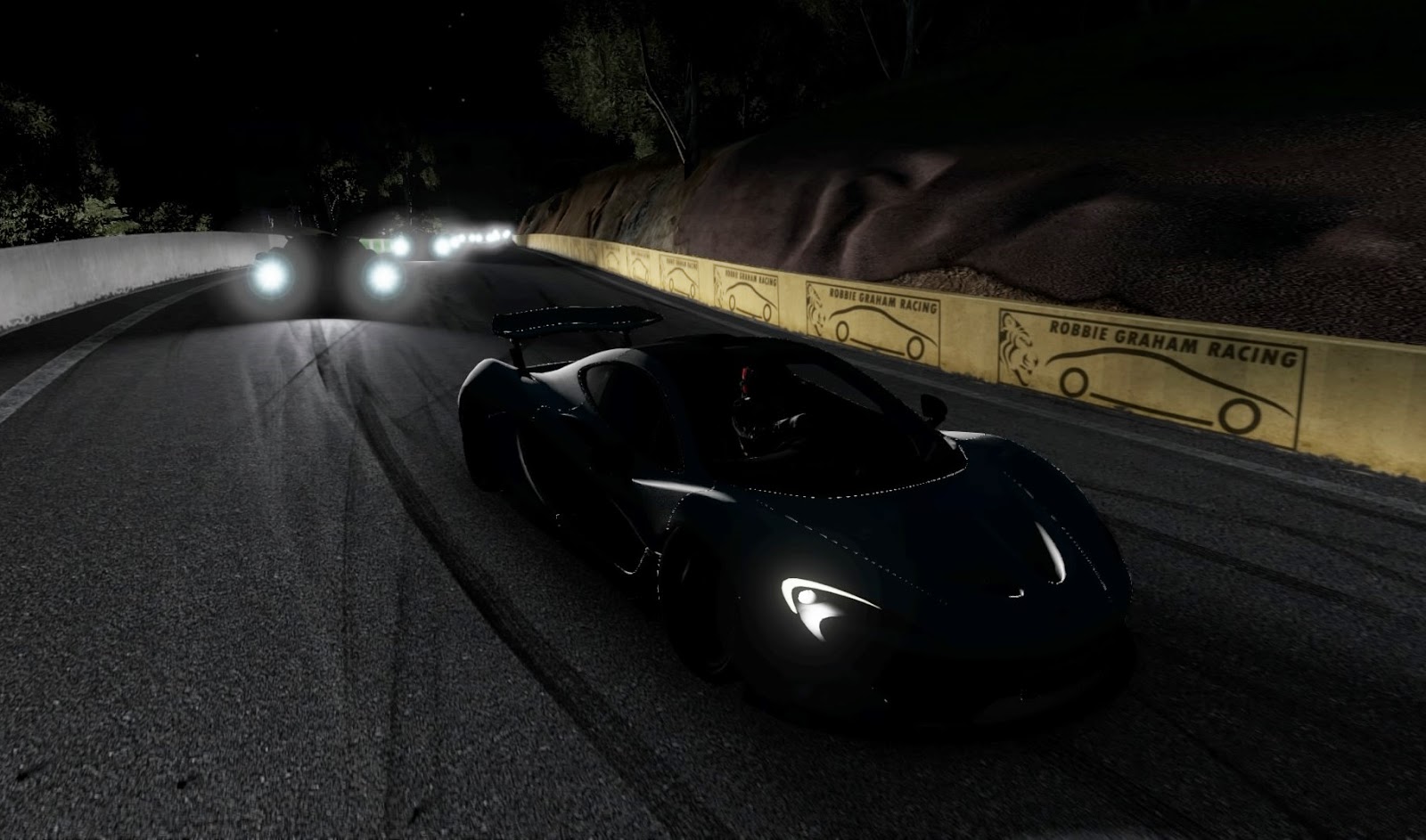 Project CARS is the first serious racing game of genuine quality on the new generation of consoles. It’s not the first racing game, of course, because we’ve got the likes of Forza, Driveclub, and The Crew, but they’re all variations of racing games designed around creating a sensation of speed first, and serious physics second. But with Project CARS, the brake button will be your greatest ally, and I love it for that.

There’s nothing forgiving about the way this racer works. If it’s raining, and you fail to compensate for the rain, you’re going to skid around like an Olympic-class figure skater. If it’s dark, and you go around ramming other competitors off the track, you’re going to find yourself without headlights. Take corners too quickly and you’ll run off the track, and the moment those wheels all hit the grass you’re punished, either with warnings for taking shortcuts, or simply having your time for that lap stricken off the record if the move was deemed to be bad driving, rather than cheating.

Project CARS is more like F1 by way of Gran Turismo than the other racing games out there that you likely play, and for many people this will mean a couple of hours of unforgiving punishment and frustration. The game doesn’t even ease you in through the story mode; though you can start your career out in the weakest engine go-karts possible, the physics and opposition racers are still more than happy to beat you if you don’t give them due respect. 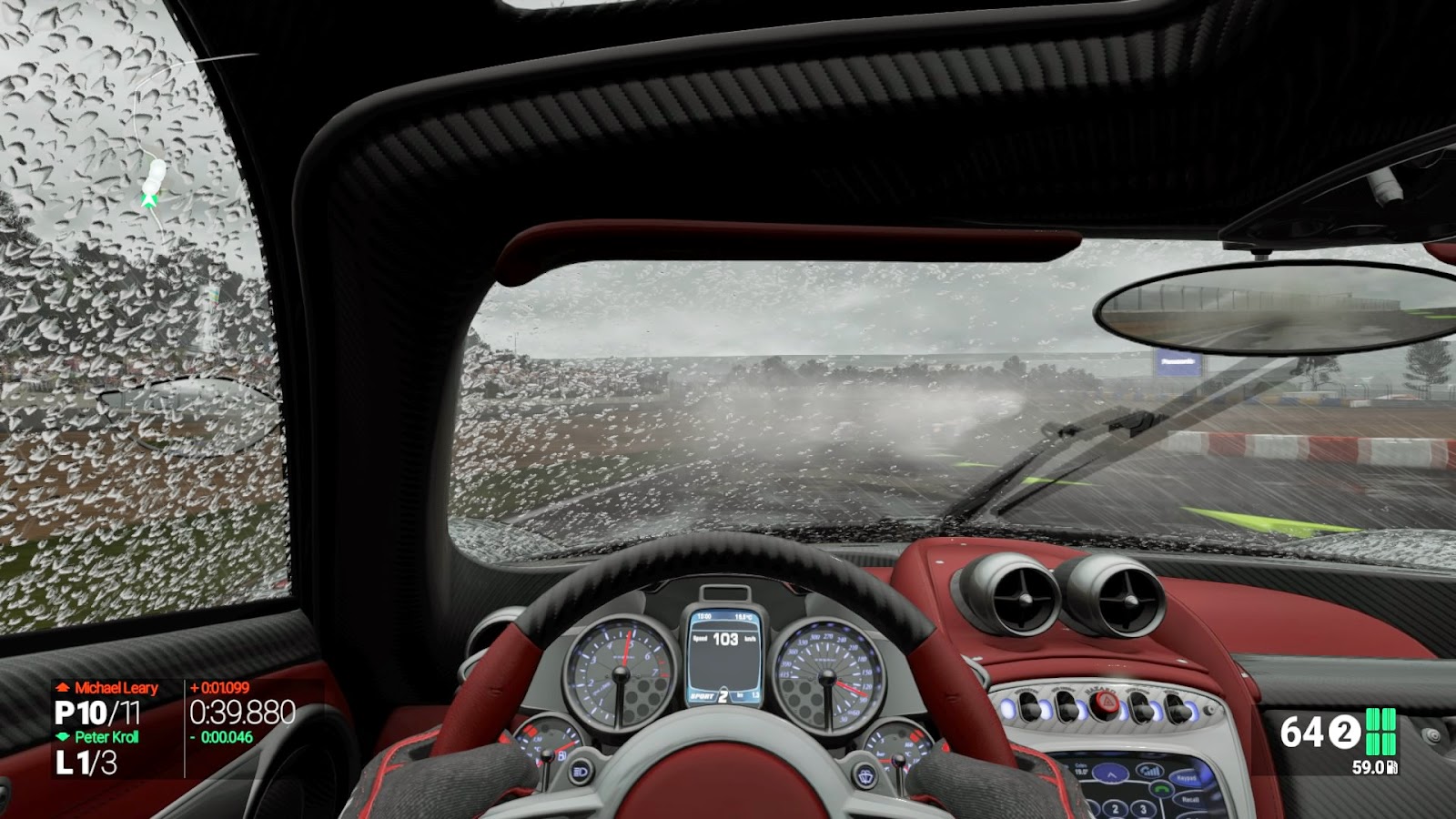 But after that trial by fire, Project CARS blossoms into something beautiful, and then becomes something truly addictive. The raw depth of content on offer, coupled with the sandbox approach to customisation, makes this simulation a playground for the most hardcore of racing game fans. Dive deep enough into it and there is menu after menu of engine and car body tweaks that you can make, and these are easily more comprehensive than any other racing game you’ve ever seen on console (and any but the most niche of PC racing sims, while we’re at it). The track settings are every bit as impressive, allowing you to dictate weather (from clear to a heavy fog, on to a thunderstorm that will truly obscure your vision), time of day, and even the precise date for the race. So, if you want to recreate a classic Bathurst racing event, you can set the date in and the game will automatically generate the track conditions for that day.

And, yes, it’s possible to race a full 24 Hours of Le Mans event, in real time, if you really want to test out your endurance and concentration. The number of tracks available to race on is incredible – 14 countries and 80 different layouts. There are dozens of different cars to choose from, from road vehicles to high-performance beasts, go karts to vintage classics, and perhaps most impressively of all, this is all unlocked from the start. Slightly Mad Studios wanted players to enjoy the simple act of racing, rather than feel like they have to complete tracks or earn experience points in order to unlock their favourite cars. The result is a game with positively spartan meta-systems at play, and it’s the better for it. You can work through the career mode if you want, but you don’t need to in order to have access to the best cars and simply take them out for a spin on a track of your choosing.

The result is a game that is remarkably pressure-free, and I ended up having as much fun simply creating various racing scenarios of my own, rather than spending time in the career mode. Fine tuning vehicles and testing them out on the track is a rewarding process when you finally nail a vehicle that feels right in the hands and are able to shave seconds off your best times. 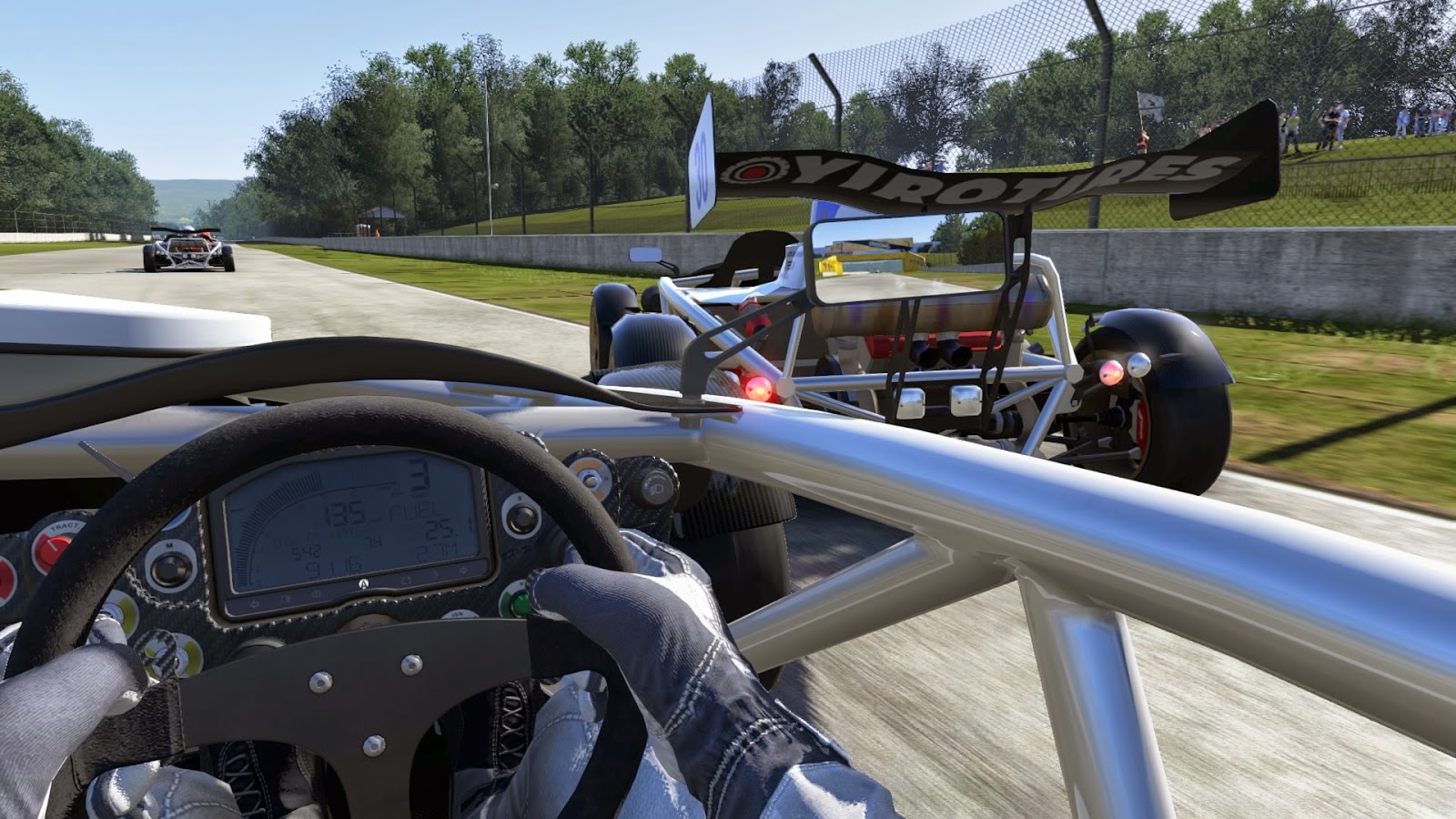 You can spend dozens of hours simply messing around with the single player mode or working through the career mode, but then there’s the online multiplayer, which is where the real heart of the game is. Owing to Project CARS’ heritage as a community sourced and funded game (before Bandai Namco picked up distribution of it, it was a crowdfunded game) the multiplayer features and statistics tracking are comprehensive, encourage good behaviour on the track, and encourage a sense of community that gives the game the appearance of being a living experience. It should go without saying that the community that will get into this game will be incredibly competitive, so you’ll want to put the practice in on the track before venturing online.

Each car is modelled with absolute love to emphasise realism and accuracy in design. this is the kind of racing game where the “in person” view is ideal because, even as it fills the screen with stuff that blocks your vision of the track ahead, the realism that the developers have managed to achieve makes this a worthwhile tradeoff. The sensation of speed as you hurtle down an incline is real, and the thrill of cutting inside an opponent on a sharp corner to overtake them is subtle, but meaningful. There is a behind the car view for people who are traditionalists about their racing, but Project CARS loses a lot of atmosphere when you play that way.

But the presentation of the game isn’t flawless. Aside from the cars, environments are disappointing indeed, with some very low resolution textures and models representing scenery and the crowds that fill grandstands could have been pulled from games a couple of generations ago. At speed none of this is especially noticeable (because everything is whirling by so quickly), but during replays or when you pause the action to take a photo, it becomes very noticeable that everything that exists outside of the boundaries of the track looks like it was created by a very different, and far less talented team of artists. 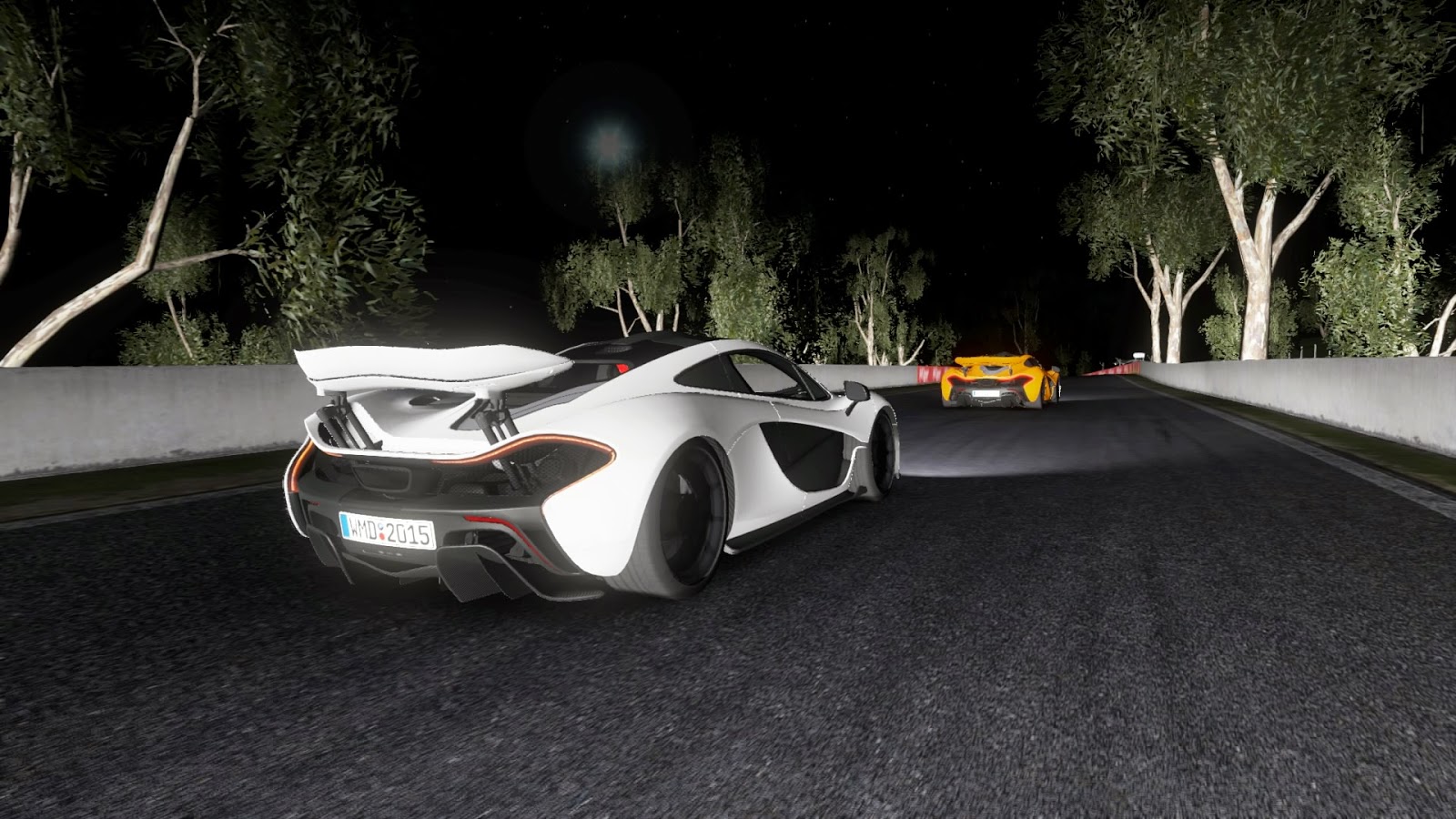 Weather effects are quite poor, too. Inside a car water splashing on the windshield during a storm looks impressive enough, and the pools of water on the track are gorgeous, but once again pulling the camera back to take a screenshot shows how cheap the animation of the rain falling from the sky is. And something that does affect the racing; on many tracks there are some quite severe instances of pop in; especially when looking through the rear view mirrors.

These complaints sound like I’m nitpicking, I know, but given how much raw effort has gone in to making Project CARS an authentic experience which is all about the pleasure of driving, it would have been nice to see the team go that little extra distance to make the tracks more visually pleasurable to drive around.

Related reading: You can also check out my preview of the game on PC with Oculus Rift support here.

All that aside, Project CARS is a truly fine racing game, and for PlayStation 4 owners this will be the first next-generation racing game of worth for serious revheads to sink their teeth into. Beginners to the genre, or people who are used to racing games where powerslides are enough to get around corners may feel very frustrated with this one at first, but I can’t think of a example of the sport that is more worth taking the time to get to know, and master, than this one.