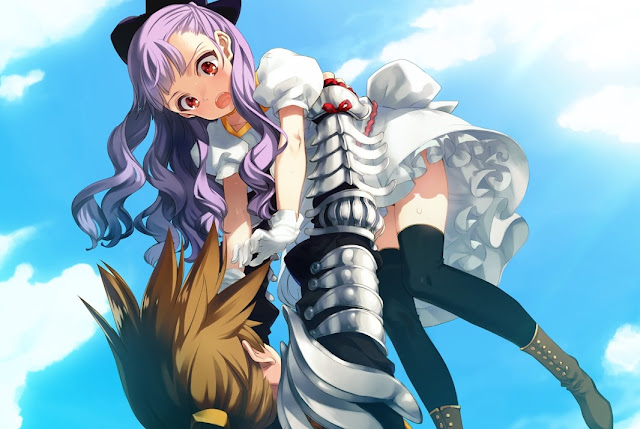 Although the PlayStation 3 is most certainly on its last legs, there are a couple of remaining games on the horizon that are well worth getting excited about. One of those is Eiyuu Senki, a strategy JRPG in which the world’s greatest military leaders (from King Arthur to Nobunaga Oda) have been reimagined as gorgeous girls, on a warpath to take over the world.

The game itself has had a very interesting history. It was originally an adult game for PC in Japan, but it was one of those games that had enough success beyond the sex that it made its way to the PlayStation 3, sans the erotica, to become something of a niche hit as a “legitimate” game.

And then boutique localisation company, Fruitbat Factory, took the game on as its biggest project to date. It might seem strange to release a game on the PlayStation 3, but as the game’s Project Lead, Jakke Elonen, says, most fans of Japanese games do indeed have the console, and in giving players an incentive to brush off their old consoles, they are able to read out to the largest community possible.

I sat down with Elonen, to chat about the game’s origins, challenges in localising such a large game, and whether this is a sign of more console projects to come for a company that had previously focused on localising PC titles.

In addition, we have three new, exclusive, images to share of the game, to help whet your appetite for what should be a really special game indeed. Those can be found in the interview below.

Digitally Downloaded (DD): What was it about Eiyuu Senki that you thought would appeal to western audiences?
Jakke Elonen (JE): I’ve personally had my eye on the game since the original PC game was announced. Most of our team are suckers for SRPGs, and there aren’t nearly enough of them out in English. Of course, Oyari Ashito’s character art is great on top of that. The voice actress galore with over 40 top of the line actresses, including many of my personal favorites, just sealed the deal.

DD: Are you concerned that it’s a PlayStation 3 game when people are rapidly turning their attention to the PlayStation 4? Why or why not?
JE: In the end this game is for a niche audience. I think we can leave the platform wars for studios that aim to sell millions of copies of a game to mainstream audience. PS3 is a great platform for playing the game as it is, and most fans of Japanese console games own one, even if it’s seeing less active use recently.

DD: The game is well known for originally being an adult game. Obviously it needed to have the explicit content removed for the console version, but do you think it has been able to maintain its themes with the more “family friendly” aesthetic?
JE: Outside of replacing explicit content with new scenes, I don’t think there’s much difference between the PC version and the MAGES./5pb. console port. The game is still rated M in North America and for our part, we haven’t applied any additional censoring to the Japanese PS3 version. The overall feel of the game is quite light, but it has some rather suggestive visuals and events… I’m not sure I can recommend the game for the whole family to play together. 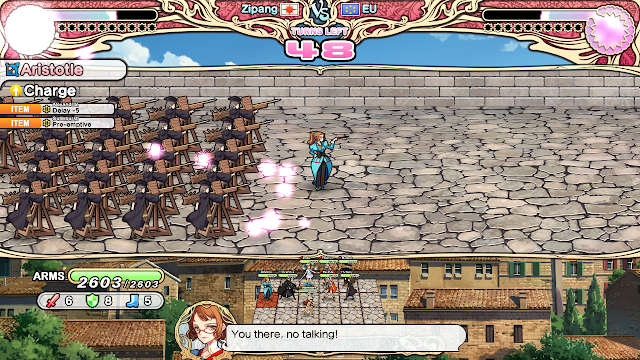 DD: As a JRPG it must have been a massive localisation project. Did you come across any particular difficulties that made this project especially challenging?
It’s certainly massive, but we had a pretty good idea of what we were getting into. It’s not the first SRPG we’ve worked on. Compared to a visual novel, a big portion of the work on any RPGs goes into playtesting and fitting things together – lots of small graphics, descriptions and other text strings, and limited space to work with. Obviously the text tends to take considerably less space when written in Japanese, so making it all fit and look natural in English takes lots of planning – and trial and error. I’d say it’s at least twice as much work as a straight up visual novel, but this is the kind of games we do in general.

In Eiyuu Senki, we had one big undertaking in particular. The game has a lot of voiced comments from the characters – especially battle dialogue, but also elsewhere in the game. However, it had no system in place to display those lines in text, so if you don’t understand Japanese, you may not get much out of them. During playtesting this spring, we decided we should add a way to display these miscellaneous voices in writing as well. Since there was no text data for them in the first place, that has meant translating about 7000 voice clips by listening to them, and creating a visually pleasing way to show them in the game. Doing that essentially ended up pushing our expected release forward by a few months, but the outcome feels so natural that I’m happy we did it. I’ve included a few screenshots that showcase the new feature – it’s actually the first time we’re showing this.

DD: The game is described as a mix between visual novel and JRPG, so in terms of the visual novel side of things, what are the key themes that we can expect?
JE: World conquest. And lots of pretty ladies. The game has our hero seeking to conquer a world ruled by female versions of famous historical figures, all for the sake of world peace. Himiko, the original Queen of Yamatai and the first person he met in this world, is always trying to get his attention and worrying about the ever increasing number of female allies at his side.

DD: From what I’ve seen of the combat system, it looks a bit like an Advance Wars-kind of tactics system. What kind of complexity can we expect to see from the system?
JE: On the strategic level, you get to make a lot of choices. Basically, you choose the order in which to go about your world conquest. Fighting a more powerful nation early on gives you the option to receive a powerful bonus item, but doing so also raises the difficulty level of the remaining countries – so if you want to challenge yourself, the game is up to the task. There are also usually multiple ways to conquer any given country.

There is no level system, and some players might struggle with the fact you essentially can’t grind to strengthen your units. With a roster of over 70 characters, you need to make decisions over whether to use your money to strengthen them all equally, or focus on a select few – and if so, who? You also have tons of items to customize your units with, granting anything from simple attribute bonuses to unique once-per-combat effects.

The difficulty curve in battles feels fair. The game uses an “advantage” system where all unit classes are strong against some types of enemies and weak against certain kinds of attacks themselves. Striking against an enemy weakness deals increased damage, but the target receives Brave Points, which are used to execute skills. Both your and enemy units play under the same rules, so you constantly need to judge your options – do you hit that unit hard now to take it down, but risk another enemy executing a powerful attack on you?

At the end of the game you get the opportunity to fight several completely optional bosses that will test everything you’ve learned about the combat, and more. I’m looking forward to seeing how players tackle those. 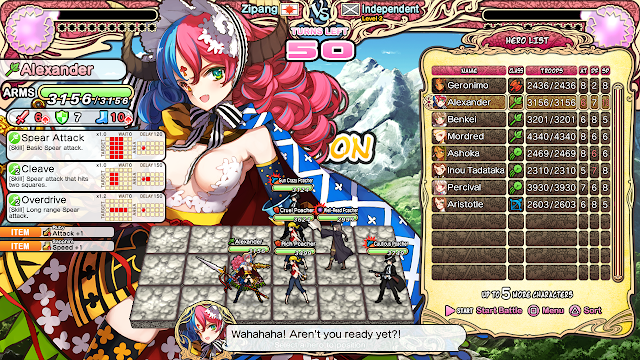 DD: It seems like it’s a good time to be a boutique localisation company. Is it just because digital distribution has taken some of the cost risks out of localising niche Japanese games, or are there other factors at play?
JE: Digital distribution is certainly a key factor that makes it possible to bring out these niche games. Developing for consoles is considerably more expensive than developing for PC in any case, but when compared to a physical disc release, the risks are more manageable. Japanese companies have also taken more interest in the global market recently, which is why there have been so many new partnership announcements in the past year alone.

DD: Are there any other console games from Japan that you have your eye on as localisation projects? Mages/5pb produces a lot of visual novels, and we would love to see more of them come our way…
JE: I can’t name names, but we have our eye on other titles too. Eiyuu Senki is in a way an experiment to see if console games are worth the time, effort and money involved for us. That doesn’t mean it needs to be a blockbuster for us to consider localizing more console titles, but it will help us judge the risk vs. reward in the future.

DD: With the Japanese market moving more and more towards mobile gaming, are you considering taking on some mobile game projects as well?
JE: For me as a gamer, PC and consoles are great gaming platforms. Mobile platforms haven’t impressed me that much so far. There’s been a movement in Japan toward developing mobile games, but I’m glad companies like MAGES. are still bringing out these console games as well. It feels hard to stand out in the western mobile market, so if we released a mobile game I’d worry about getting lost in the crowd. It might happen regardless, if some game looks interesting enough, but it’s not a focus in the immediate future. 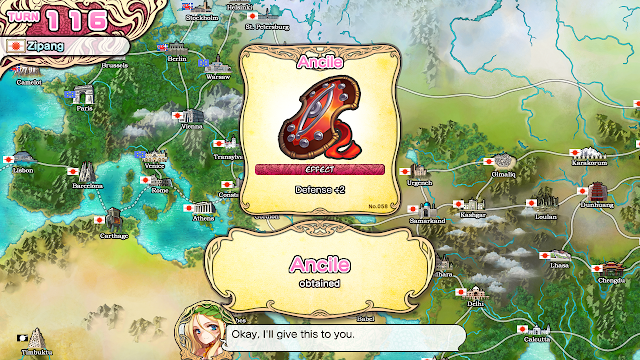 DD: Finally, who is your favourite Eiyuu Senki character, and why?
JE: Just one, huh. It’s really hard to give a reply that doesn’t include an “and”. I love the foul-mouthed knight of the Round Table, Ywain – her dialogue is actually the ultimate reason Eiyuu Senki got an “M” rating in North America, but it’s hard to hold that against her when she sounds so cute spewing her profanities.

You might have played the Citizen Kane of games, but you probably ignored it