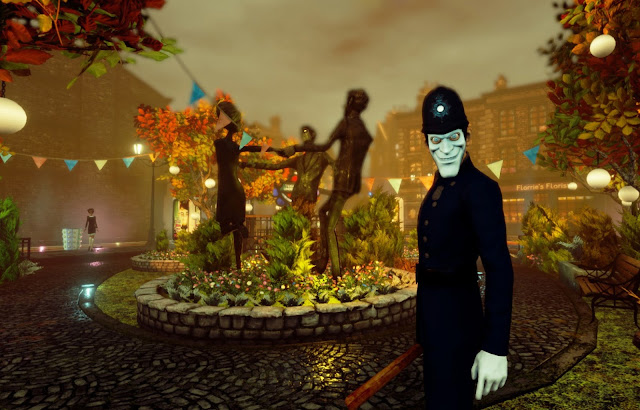 Contrast is one of our favourite independent games ever. Released first on old generation consoles (and PCs) back in 2013, before making its way to the PlayStation 4 and Xbox One, Contrast was a fascinating and deeply interesting game with a breathtaking art style and really clever theme and set of gameplay mechanics.

Now the developer of Contrast, Compulsion Games, is back with We Happy Few. It has taken to Kickstarter to help raise the money it needs to produce what looks to be a very ambitious game, and Oh My GOD this has got to be one of the most interesting and beautiful games ever designed.

Related reading: Check out our review of Contrast here.

I mean, just listen to the game’s description: We Happy Few is the tale of a plucky bunch of slightly terrible people trying to escape from a lifetime of cheerful delusion. Set in a drug-fuelled, retro-futuristic city in an alternative history 1964 England, you’ll have to blend in with its other citizens, who don’t take kindly to people who don’t abide by their not-so-normal rules.

How could that possibly not be awesome? We’ve got an Orwellian dystopia mixed with an acid trip art style. The Kickstarter campaign is throwing around terms like retrofuturism, and despite being such a clearly creepy place, everyone is bouncing along to 60’s style pop music. Given that Contrast made such an effective use of… well, contrasts, we are expecting nothing short of sheer genius from this game too.

The team has an ambitious Kickstarter goal of $250,000, but it’s off to a good start, having raised nearly $50,000 of it already. Compulsion Games has also produced a video trailer that shows off some of the gameplay and attitude of the game; have a watch, the trailer alone instantly sold us on the game.

In short, we can’t wait. It’s great to see Contrast was enough of a success that Compulsion has been able to back itself for a second bite of its unique and clever aesthetic.

To read more, or back the Kickstarter, click here.