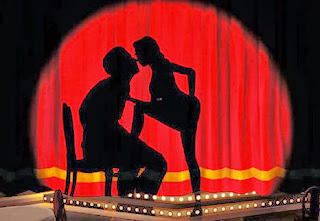 Until I played Contrast I wasn’t interested in it. That changed about three minutes after I started playing. This is a deeply intelligent game, and yet another example of a wonderfully emerging class of games that maintain artistic credibility while also offering genuine production values. Rain, Shelter, Papo & Yo and now Contrast; it has been a good year for serious gamers indeed.

Contrast feels remarkably like Rain, both in concept and theme. Conceptually it’s a game that forces players to look at their play environment in a different manner. Where Rain did it by forcing players to consider the impact that the very atmosphere of the environment would have on their ability to function by rendering characters invisible unless they stood in the rain itself, Contrast tasks players with looking at every object as a device for casting shadows. Players are able to “shift” into the walls of the environment, as long as they are brightly lit, and then use the shadows as platforms to reach previously unassailable areas and objects. The world is a 3D one, but for all intents and purposes it is a 2D platformer and players quickly learn to see the walls, not the rooms, as their play space.


For a longer game, Contrast’s concept would wear thin, but as a brief experience it works perfectly, and just like Rain the game understands not to outstay its welcome. Where some will then criticise this game for being “too short,” but I would argue that it’s not a short game at all; it demands multiple replays because, thematically, it’s incredibly deep and emotionally engaging and there’s plenty to analyse as you go through to properly understand the experience. 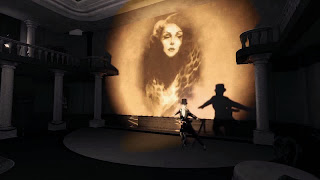 Just as with Rain, Contrast’s core theme is around innocence lost, with players taking on the role of a young and troubled girl’s (named Didi) imaginary friend. This means you’ll be in the role of the very definition of unreliable protagonist; nothing about the world is real but rather the world that you’ll see is what is processed be the mind of a girl. If she was a normal child this would be one thing, but she’s very focused on her parent’s dysfunctional relationship and so there’s a lot of dysfunction in the world she sees. Stray too far away from the next objective and the world will literally disappear under the player’s feet, and aside from Didi, none of the other game’s characters are even visible – the most we ever see is the shadows. Didi is the centre of this world and everything happens around her and directly impacts on her.

So focused are players on Didi as the centerpiece of the narrative that they quickly for a bond with this only tangible connection to the real world, and her story isn’t one that isn’t a happy one. A broken child in a broken world, Didi’s view of the world is distorted and colourless. Though loosely based around the same glamorous America that brought us the likes of Chicago (the musical and later film), in Contrast the dark and drab colours are only occasionally punctured by brightness. Colour aside, the world is filled with oversized objects that only a child’s perception could see, and objects and architecture are always ever so slightly distorted as a sign of a cluttered mind that doesn’t quite perceive the world as a normal person might. 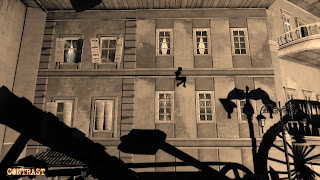 Because the world is only seen second hand through a clearly unreliable protagonist, it becomes difficult to discern the truth of what’s going on. On the surface we of course see a struggling single mother and a dropkick father that flits from one insane cash grab into the next before landing in the web of the mob, but that’s only because that’s what Didi wants us to see. The silent acrobat that players control isn’t able to question what’s going on, or investigate deeper, and there’s always the sense that we are simply not getting the whole picture here; what we as players see are mere snippets of the overall story with key moments that provide the highlights but not the context.

If Contrast wasn’t supported by quality acting it would fall very flat, but the entire game just works. The voice actors are impeccably cast and deliver their lines with real believability. Didi herself is a compassionate lead, and the small details come together to create a very authentic experience; small visual cues such as the mime-face paint on the player’s avatar clues us in to our role in the overall performance well before the narrative does so.

It’s a short game, but Contrast is packed with care, and not a second runs overlong. It’s a brilliantly realised example of a game as a work of art. Coming so shortly on the back of Rain, the games industry is throwing out all kinds of signs that it’s finally at a place where decently-budgeted art titles are not only possible, but they’re going to come more regularly going forwards.