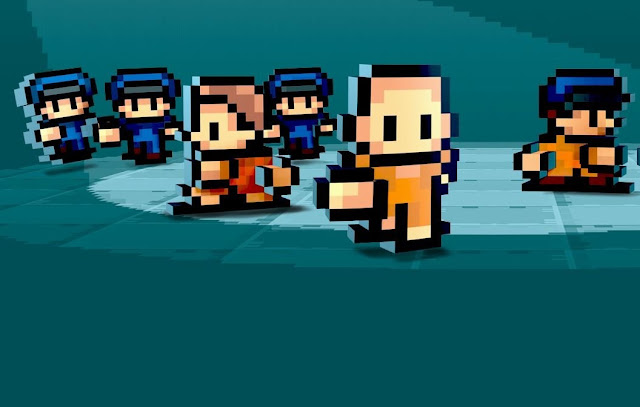 People have a real fascination in creating and then solving crime fiction puzzles. Right from the formation of the detective story in Edgar Allan Poe’s The Murders in the Rue Morgue, through Arthur Conan Doyle’s Sherlock Holmes and Agatha Christie’s Hercule Poirot and Miss Marple, the game with which the author give the audience a puzzle to try and figure out before they get to the big reveal has had an enduring appeal.

The prison break is a popular alternative that flips the locked room puzzle on its head; looking instead at how someone could get out of a locked room without getting caught. From Shawshank Redemption to Prison Break, people have been every bit as fascinated by these puzzles in popular culture. And that’s where The Escapists comes in; it gives people the opportunity to play out that fantasy.

Not that it looks like much at first. Resembling a quickly thrown together RPG Maker game, The Escapists presents players with a range of different prisons to break out of, but they are all quite functional in design, and characters are simple pixel people. It’s a charming enough visual effect, but it hardly captures the gritty crime fiction that most prison stories gun for. 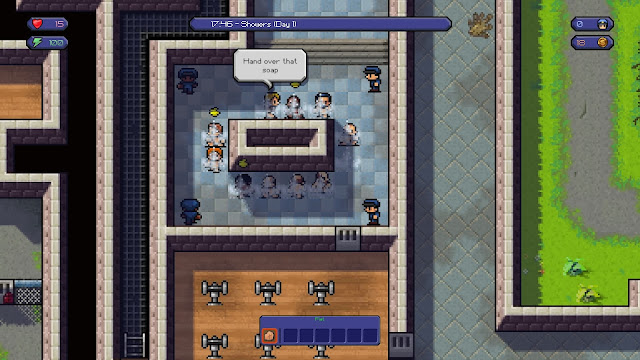 Instead, The Escapists aims for humour – soap jokes in the shower room and all. There’s no real characterisation in the game, with the pixel people instead throwing out quick little one-liners from time to time when they’re around, but accompanied by the irreverent art style and silly music soundtrack, it all ends up working. It’s perhaps not quite the game you envisioned when you first heard you’d be playing a game about breaking out of prisons, but after a hour or so acclimatising to it, The Escapists proves it has charm.

After a brief tutorial to explain how to go about planning and executing the perfect escape, your little pixel man is thrown into his first prison, which is, conveniently, a very low security prison that is so comfortable you’ll wonder why he even wants to escape. This first prison is the perfect playground to learn how to pull the game’s various systems together in a way that the tutorial’s focus on the raw controls won’t explain. The first thing you’ll learn is that there is a schedule to life in prison, and you’ll need to plan the escape to take that into account. Your prisoner will wake up, attend roll call, have breakfast, have some free time, have lunch, do his prison job for a few hours, exercise, shower, have dinner, and then have some more free time before night time roll call and bed. Aside from the free time sessions, guards will be put on alert if they don’t see the little man where he should be. That is unless you’ve done enough to improve his relationship with them to the point where they trust him.

Free time doesn’t last long, but those are the times you’ll need to be most efficient in your time. You’ll want to complete simple missions for your fellow prisoners, so they pay you money, and then use that money to buy contraband goods that you need to craft tools to assist your escape. Those missions typically involve tracking down specific items, creating distractions so the prisoner can do something under the radar, or beating someone up. 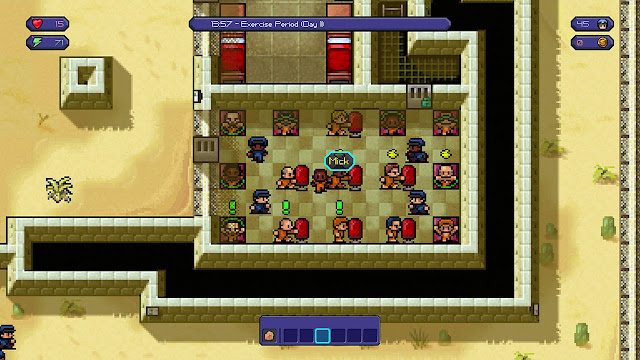 Completing missions is also a good idea because it improves your relationship with the fellow prisoner. If a prisoner gets to the point where they hate your little pixel avatar, they will try to beat him up at every opportunity, and dealing with that can be quite the waste of time.

After a couple of in-day loops of this schedule, you’ll have enough items collected to craft into the sequence of tools you need to escape, and that’s when the real fun starts, as you’ll be sneaking around, unlocking locked doors, crawling through vents and digging tunnels on your way to glorious freedom. What’s impressive about The Escapists is that it does allow players the freedom to experiment and come up with their own escape plans. While the unpredictability of what other characters might do can foil the best laid plans in a frustratingly random fashion at times, the freedom and creativity that the game’s structure allows more than compensates for it, and after all the time it takes to prepare and plan, that moment when you do finally achieve freedom is a truly rewarding moment.

Later prisons become far more strict and restrictive, and it becomes increasingly hard to do anything without attracting notice, and that’s how The Escapists’ difficulty level escalates. By the time you reach the DLC prison – Alcatraz, no less – you’ll be forming complex and layered escape strategies that make what that guy from Prison Break got up to look amateur. 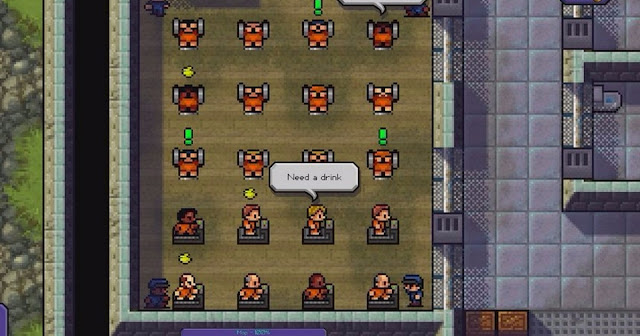 There are some minor irritations in the way The Escapist plays. Dialogue boxes pop up and disappear far too quickly, given that they often contain important information, and indeed everything in the game moves too quickly for what would have been more entertaining as a slow paced, methodical game. Some of the in-game activities are ill conceived too, such as the exercise machines. You’ll need to use these to strengthen your character for when he inevitably gets into a fight, but using them requires you to button mash the shoulder buttons of the PlayStation 4 controller in a “left-right-left-right” sequence. It’s tiring and an irritating process after the first time… and you’ll need to do it a lot.

Related reading: For a second opinion on the game, check out Nick’s review of the Xbox One version.

Despite these irritants, The Escapist remains light-hearted fun. It’s not an especially meaningful or rich gaming experience (and of course, it doesn’t try to be either), and it won’t be remembered a decade from now as a classic, but it’s honest entertainment that does on some level tap into one of the more enduring subsets of the crime fiction genre.